With the school holiday period officially under way in Victoria, some families are treating it like any other, loading their cars with bikes and jet skis, and heading to some of the state's most popular holiday destinations. 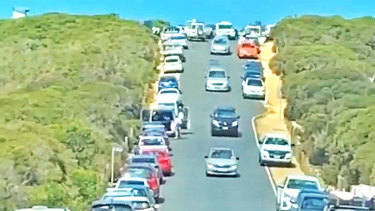 In Walhalla, east of Melbourne, one resident said the small population was "begging people to stay away".

"Vehicles, especially 4WDs, are pouring through and into Walhalla … but groups are claiming it is their right to camp, and the best thing to do."

Another resident on the Mornington Peninsula said many people were treating the new restrictions as a "joke".

"All day (there are) cars, boats, people and jet skis everywhere. They are not locals. Why are people not taking this seriously?" said one resident, who did not wish to be named.

Individuals caught breaking social-distancing and quarantine rules face fines of up to $1,652, or $9,913 for businesses.

Despite reports of mass gatherings on several beaches across the state on Saturday, including on the Surf Coast and Morning Peninsula, which were closed later in the day, Victoria Police said they had not issued any fines for breaches of COVID-19 regulations as of 3pm on Saturday.

On Sunday, Victoria Police would not comment on whether any particular areas would be targeted in a bid to avoid further mass gatherings.

“We have seen the vast majority of the community treat this issue with the seriousness it deserves up until this point,” Commander David Clayton said.

"We need everyone on the same page to ensure we are not putting more people at risk. Victoria Police ultimately does not want to have to be fining people, but if you choose to flout these restrictions we will find and hold you to account," he said.