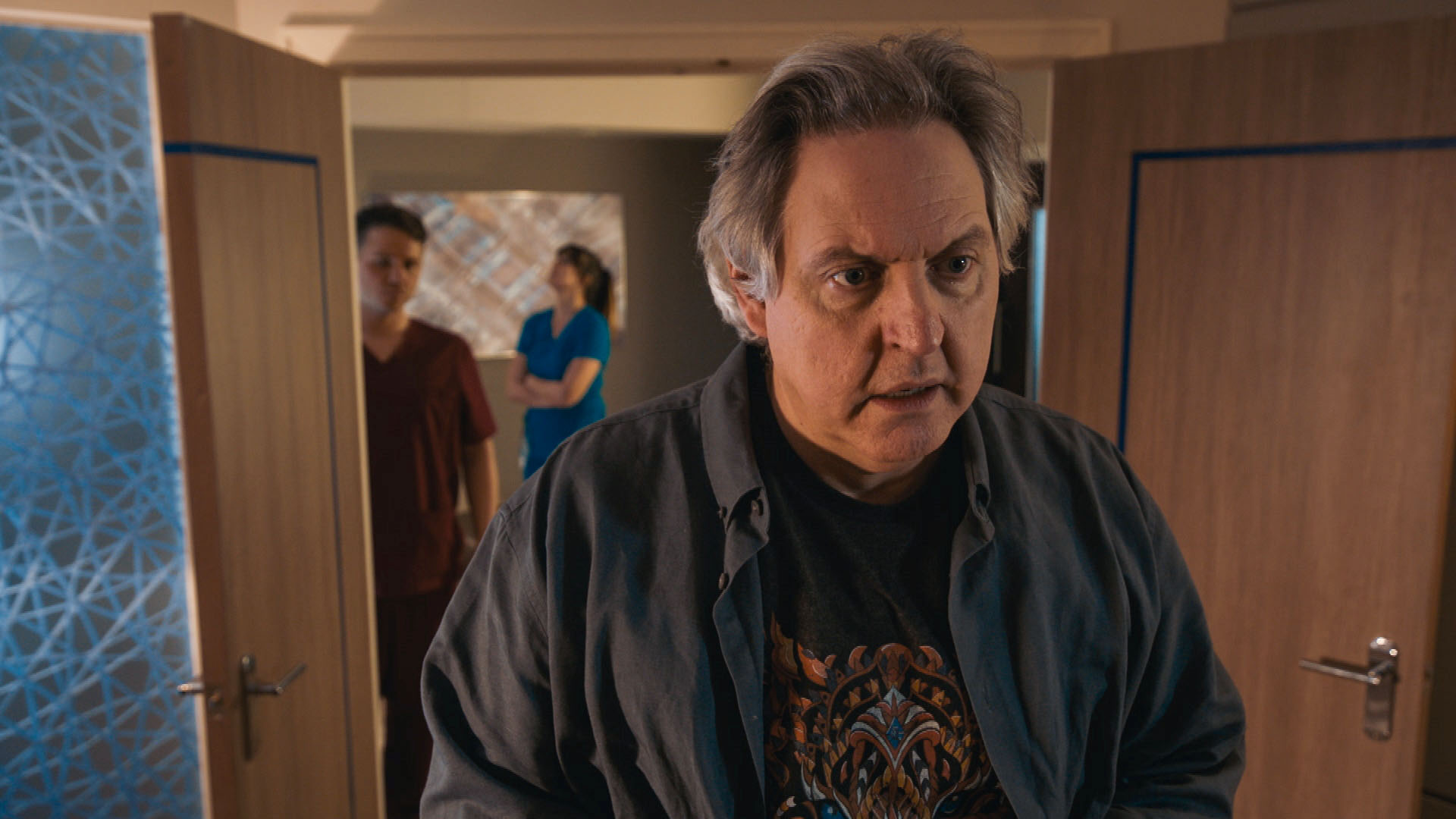 There was a shock in tonight’s Holby City as Dominic Copeland (David Ames) took his revenge on Sacha Levy (Bob Barrett), the man he blames for the life-changing injuries he suffered after the car crash in February. Sacha has been doing his best to make amends to Dominic, agreeing to try to reverse his stoma in an ill-advised piece of surgery that ultimately failed, and helping him to get his career back on track.

Tonight Dominic asked him for a reference to aid him in his application for a consultant post – and then promptly threw Sacha under the bus marked Ambition at the first opportunity.

In a terrible betrayal, Dominic told Hanssen (Guy Henry) that Sacha had operated on him to try to reverse the stoma without his consent. ‘Ever since Essie passed, he’s changed. He’s become reckless and if he’s able to do that to me, who knows what else he’s capable of?’ Ange (Dawn Steele) – who was also involved in the surgery – told Hanssen it didn’t happen and the proof was that Dominic still has a stoma.

But when Dominic told Hanssen to ask Josh (Trieve Blackwood-Cambridge) and Jeong-Soo (Chan Woo Lim) what they knew about what happened, Sacha realised he was in a corner. He couldn’t face the idea of the two young F1s possibly having their careers ended for taking part in the unethical surgery, so he told Hanssen that the operation happened, but he was entirely to blame.

Sacha has now been suspended pending an investigation, and Dominic has persuaded Hanssen to give him the acting clinical lead position. As we saw Sacha standing at the bus stop with the obligatory box of office belongings, Dominic was moving into the consultant’s office. Donna (Jaye Jacobs) spoke for all of us: ‘Are you joking?’

Meanwhile, Max (Jo Martin) was grappling with the decision about whether to have surgery to lessen her chances of getting breast or ovarian cancer because she has the BRCA1 gene. As so often happens in Holby she was aided in her thinking by a patient who was very proud of her new breast implants. There was also the arrival of Max’s old flame, Treve (Karl Collins), who also happened to be a breast surgeon. After initially thinking she wouldn’t have the surgery, much to the dismay of son Louis (Tyler Luke Cunningham), Max eventually came round to the idea and has asked Treve to be her surgeon.

Evie Fletcher (Phoebe French) started her job as the new barista at Pulses, and wanted to reunite Andrei (Sonny Poon Tip) with the jumper he loaned her after he spilled coffee on her. The problem was that Andrei has been missing for the two weeks that have elapsed in Holby time since Kian (Ramin Karimloo) was left battered and bruised in the hospital car park and Andrei was driven off by the Nasty Men.

Luckily he’s been texting Evie so we know he’s still alive, but he’s told her he’s leaving the country and she’s asked Kian to stop him. Fletch (Alex Walkinshaw) is going to be livid when he discovers that his daughter and Kian have both ignored his strict instructions to keep Evie well away from Andrei and whatever criminal associates he’s involved with.

In a lighter storyline, it’s clear that Josh is very keen on Ange and doesn’t mind the age difference at all. In fact he arranged a nice evening with both her and Chloe (Amy Lennox) so he could get to know her daughter. The problem, as could perhaps have been predicted, is that Chloe also finds Josh quite attractive and when Ange was called away Chloe made it clear she wouldn’t mind progressing things with him.

He deflected the suggestion rather nicely and called her a cab, but it was all a bit awkward, and Chloe is going to be mortified when she finds out she’s been flirting with her mum’s boyfriend.

Sue Haasler is the author of five novels and the official BBC Holby City book, which you can read about here.