Nothing says Christmas in Australia like getting a spray tan in March. Especially if you’re filming a Christmas-themed episode in Autumn. 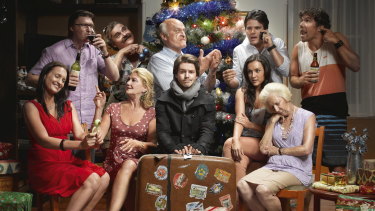 Lloyd is talking about A Moody Christmas, the 2012 comedy he starred in and co-wrote with director Trent O’Donnell that has quietly become the go-to Christmas TV classic for many Australians.

The show followed the Moody family through six Christmases, with youngest son Dan (played by Ian Meadows) returning home from London each year to join the celebrations. It was a universal story told with a very Australian spin – and filmed in West Ryde.

When it screened on the ABC, it was one of the few local TV shows to dedicate itself to the Australian Christmas experience. Instead of snow, there’s a hole in the backyard where the in-ground pool should be; eggnog has been replaced by cold beer and, instead of scarfs and reindeer jumpers, it’s thongs and boardies.

“A lot of it was obviously made up, or an amalgam of various characters and stuff from both Trent and my family,” says Lloyd. “There’s an uncle, Uncle Terry, and he’s obsessed with talking about how people got from A to B – ‘Which way did you come?’ and ‘How’s the traffic?’ – and I’ve had so many people come up to me and go, ‘Was that about me?’” 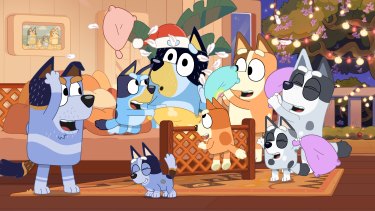 The Verandah Santa episode of Bluey has attracted an audience of more than 2 million. Credit:

For anyone raised on a diet of British and American Christmas “very special” episodes, it was – and still is – a breath of fresh air. Its only competition of late has come from the all-conquering ABC children’s animation Bluey, which has produced two wildly popular festive episodes, Verandah Santa and Christmas Swim, which have racked up than 2 million views each on iview.

“The great thing about Christmas is that for most people, even people who don’t celebrate it, is that it’s familiar,” says Lloyd. “It’s like a ready-made structure: if family gets together, you have lunch, you do presents, often people might have too much to drink, there might be an argument. All that stuff is really familiar, so you don’t really have to set it up and explain it to the audience.”

Unlike in Britain and the US, Australia doesn’t have a tradition of dedicated Christmas episodes. The main reason for this is that December is a non-ratings period, so free-to-air networks aren’t willing to spend money on a show that will not attract advertising dollars or eyeballs because Australians, generally, aren’t spending the day indoors in front of the TV.

Compare that to Britain, where the two-part The Office Christmas special clocked up a combined audience of more than 13 million in 2003; while Doctor Who Christmas specials average more than 10 million viewers. In the US, meanwhile, the Hallmark and Lifetime channels crank out made-for-TV Christmas movies at an alarming rate and Netflix has its mammoth “holiday” library of original Christmas content (Christmas with a Prince, A Christmas Prince, The Knight Before Christmas, The Princess Switch: Switched Again – you get the idea).

The Office Christmas specials were the perfect conclusion to the Ricky Gervais series.Credit:© BBC

Our festive TV traditions are usually event-based: think OTT carols nights on Nine and Seven that are stacked with whatever network stars are in favour that year. Scripted TV Christmas specials are sporadic at best – ever-reliable Neighbours has been feeling annually festive since 1986, when the residents of Ramsay Street were turned into pantomime characters via dream sequence – and they are usually screened in November.

However, there is now a small but growing cluster of home-grown Christmas shows: streaming service Stan, owned by the publisher of this masthead, has commissioned two made-for-TV Christmas movies (Christmas on the Farm and A Sunburnt Christmas), and produced the No Activity Christmas special, The Night Before Christmas, in 2018. That’s not forgetting the one-off 2005 Kath & Kim telemovie, Da Kath & Kim Code, which featured Kath and Kel as back-up dancers for a Michael Buble Christmas concert.

And while all feature the usual Australian spins on Christmas – hot days, cool pools, pavlova and punching Michael Buble – what sets the Queensland-set Christmas on the Farm apart was that it was written by a Jewish American, Jennifer Notas Shapiro.

Known as the “queen of Christmas movies” – she has written 14 for the Lifetime and Hallmark channels – Shapiro says the themes of Christmas TV are universal, no matter where the show is set. 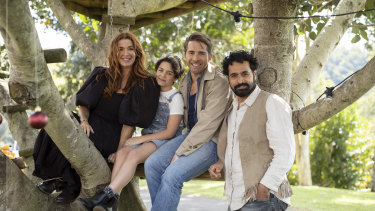 “There’s a term we use called ‘Christmas conflict’,” says Shapiro. “It’s not really conflict, there’s a lightness to it. It’s very much like, ‘It’s the holidays, everybody’s celebrating’. Nobody wants to think too hard or feel sad. It’s just, like, bring the joy.”

Shapiro says the stories should also appeal to as broad an audience as possible, which means the religious side of Christmas (the “little baby cheeses” according to Kath and Kim) usually gets short shrift.

“It’s kind of this midway point between what someone who was religious might feel about celebrating Christmas and the pure materialism part,” says Shapiro. “You can’t land too hard on either side. You’ve got to find that middle part that people are living in and understand and then just create something that’s a little outside of their experience.” 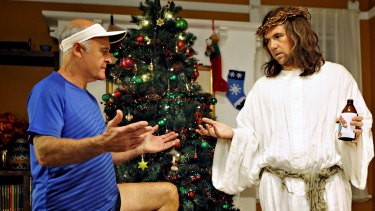 Kevin Moody (Danny Adcock) talks to Sean (Patrick Brammall), who is wearing an out-of-season crown of thorns for the nativity in A Moody Christmas.

A Moody Christmas, meanwhile, does feature the family talking about going to church, attending a carols night and oldest son Sean (played by Patrick Brammall) attempting to turn a quick buck by running a nativity business. “I think he showed up dressed as Jesus and was wearing a crown of thorns,” says Lloyd. “It was the wrong holiday, anyway.”

Lloyd says he still hears from people who have turned A Moody Christmas into an annual TV tradition, which he calls the “biggest compliment of all”.

Does that mean the Moodys could return for another “very special episode”?

Find out the next TV, streaming series and movies to add to your must-sees. Get The Watchlist delivered every Thursday.