Jockey Liam Treadwell, who rode Mon Mome to victory in the 2009 Grand National, has died aged 34.

Trainer Alastair Ralph confirmed the tragic news on Tuesday and described Treadwell’s death as ‘unbelievably sad’ and a ‘big shock’.

Tributes have poured in for Treadwell, who won the world’s greatest steeplechase at Aintree on 100/1 outsider Mon Mome 11 years ago. 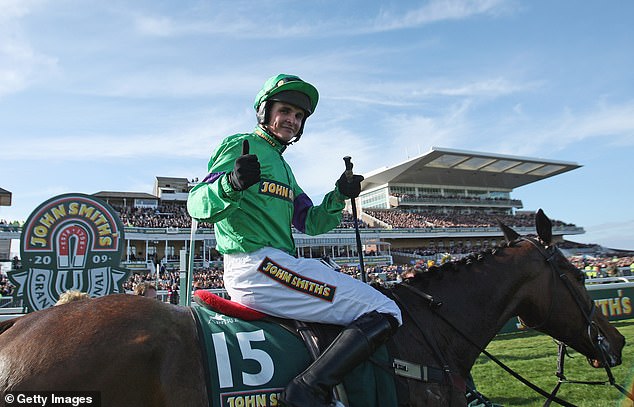 Jockey Liam Treadwell, who rode Mon Mome to victory in the 2009 Grand National, has died

Trainer Olly Murphy wrote on Twitter: ‘Terrible hearing the shocking news about Liam Treadwell. A kind, warm hearted man who I enjoyed having round Warren chase for the short spell he spent with us. May his mind now be at peace. Sleep well x.’

While author and broadcaster Clare Balding paid tribute, writing: ‘I am desperately sad to hear of the death of Liam Treadwell. My heart goes out to his family and all his friends. He was the loveliest guy with a great sense of humour and I know how much @IJF_official has supported him in recent years. It is a tragedy to have lost him so young.’

As well winning on the Venetia Williams-trained Mon Mome on his first attempt, Treadwell was also third in the Grand National on Monbeg Dude in 2015.

Other big-race successes for Treadwell included the Grand Sefton Handicap Chase at Aintree on Bennys Mist in 2015 and the Byrne Group Plate on Carrickboy at the Cheltenham Festival in 2013.

Treadwell announced his retirement from riding in February 2018, but returned to the saddle in March 2019.

As well as still riding, he was assistant to the Bridgnorth-based Ralph. Treadwell rode more than 300 winners during his career.