If you think this means more to Wales than England, go in our dressing room! Gareth Southgate’s rallying cry to his stars ahead of World Cup Battle of Britain on Tuesday night

On one subject at least, on Monday, Gareth Southgate was prepared to concede some ground to Wales.

‘They have a great anthem to be fair,’ he said. ‘It’s stirring.’

But ahead of a World Cup meeting with the Welsh tonight, that was as far as the England manager felt he should go. 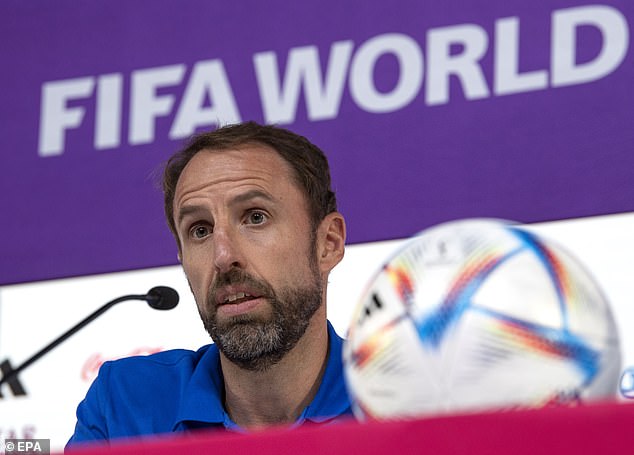 This may be a game being characterised as a home international taking place in the desert but for the England manager it is simpler than that. ‘Any England game has a highly-motivated opponent and I don’t really see this being any different to how the game was the other night against the USA,’ said Southgate.

Victory against Wales tonight would secure England first place in Group B. Wales, having earned only a point from two games so far, are playing largely for pride and in theory that freedom may make them slightly more dangerous.

On this, though, Southgate wished to be clear. When it was put to him that the Welsh may be driven by the emotion of the occasion more than the English, he said: ‘I think if people want to say that then they wouldn’t know our dressing room very well. Or any England dressing room I was in as a player. 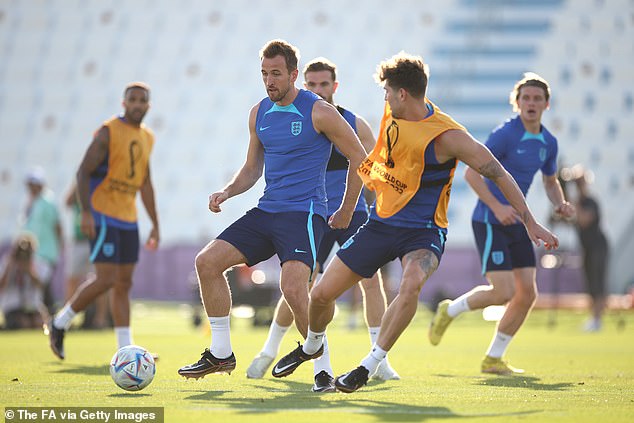 ‘That’s an easy narrative for people to say but it’s not my experience.’

Games between England and their neighbours from the UK tend to be notable for two things. They rarely contain an awful lot of expansive football and England usually win. The Three Lions have lost once in their last 10 matches with Wales. Against Scotland, it is one from 12.

The greatest danger to Southgate’s players tonight will not necessarily come from the quality of a Wales side that continues to lean heavily on the sporadic brilliance of Gareth Bale. Instead it will be from the increase in effort levels that often come from the opposition on these occasions.

England, for example, drew 0-0 with Scotland in last summer’s Euros on a night at Wembley when the Scots were the more energetic team. ‘Physically Scotland found a level they hadn’t found before and couldn’t find in the game after,’ reflected Southgate. ‘That is the nature of this game. But we have to ride through that and make sure our quality counts.

‘You have to match the spirit and display the quality with the ball that allows us to be ruthless. We have to make sure our emotional focus is on what we do well.’

The last time these two teams met in competitive play was in the group stages of England’s disastrous Euro 2016 campaign. England, under Roy Hodgson, played poorly before winning the game at the death through a goal from Daniel Sturridge.

Both teams qualified from the group that year and Wales went on an historic run to the semi-finals. England, meanwhile, lost to Iceland in the last 16, prompting remarkable scenes of celebration caught on camera at the Wales team hotel.

Asked if a reminder of this would be pinned on England’s dressing-room wall tonight, Southgate replied with a smile: ‘I couldn’t say. We are aware of some of that but I couldn’t say if we would use it or not.’

A look at the squad that Hodgson took to France six-and-a-half years ago reveals that Southgate has a group of greater quality with him in Qatar. Familiar issues remain, though. England’s football in the 0-0 draw against USA last Friday was without cohesion and it is to be hoped that tonight’s game not only brings victory but also renewed momentum and purpose ahead of the knockout stages.

For Wales, this game may prove to be the last knockings of a World Cup visit that was hard earned but has thus far been largely unrewarding. For England it simply must feel like the beginning of something better.

Southgate at least has not yet lost his sense of humour. Asked by an American journalist why two countries from the same island should have such a rivalry, he pointed at the desk in front of him. ‘Well, basically they are here and we are there,’ he smiled. ‘It’s like any two countries whose borders are next to each other.

‘For me it’s a great sporting rivalry, no more than that. That feeling might not be mutual but I can understand that as well. I live in Yorkshire and they feel the same about the rest of England.’