The RSL is encouraging families to make a short video reciting the Ode ("They shall grow not old, as we that are left grow old…) to post online before Anzac Day as it revealed that fundraising for the commemoration is already down half a million dollars due to the coronavirus.

The pandemic means is it the first time there will be no dawn service at the Cenotaph in Martin Place since 1928, apart from 1942 during World War II when large gatherings were discouraged and hotels closed. 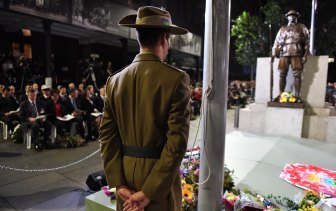 "It's not that we cancelled Anzac Day. It was never cancelled, it's just the way that we commemorate Anzac Day this year is going to be a little bit different from what we traditionally do."

The postings were launched on Tuesday with a video by former Commando Damien Thomlinson, who lost both legs in Afghanistan due to a roadside bomb. Other videos include four-time Olympian and basketballer Shane Heal, Australian actor Dan Ewing and news presenter Georgie Gardner.

The RSL said messages can also be personal tributes, photos and other messages of support. By using the hashtags #ANZACspirit and #lightupthedawn, these messages will form a collective community movement of commemoration and appreciation.

CEO of RSL NSW Jon Black said the organisation's reduced funds were due to the fact it had been unable to run the traditional Anzac appeal. 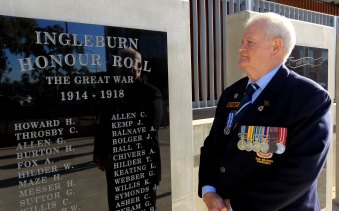 "We would be down at least half a million that's why we are encouraging everyone to go online and make a donation at ANZAC Appeal," he said. "Our income has been critically impacted like any other organisation but if we go back to our core basics around our resolve and volunteering spirit it will get us through this no doubt."

RSL NSW continues to provide support to veterans and their family around the state throughout the COVID-19 crisis, as do RSL state branches all across the country. The loneliness, impact of self-isolation and being unable to attend events to commemorate Anzac Day can add to existing mental health and wellbeing challenges.

Since July 2019, RSL NSW, through its service arm RSL DefenceCare, has contributed more than $755,000 in direct financial assistance, taken more than 5300 calls from veteran families and submitted almost 1600 claims to the Department of Veterans’ Affairs.

Words to the Ode

"They shall grow not old, as we that are left grow old; Age shall not weary them, nor the years condemn. At the going down of the sun and in the morning We will remember them."