Drew Barrymore is #momgoals in so many ways — starting with the fact that, as she recently explained, she loves being a mom while also making a clear distinction that she’s not a “best friend” to daughters Olive, 8, and Frankie, 7. But that doesn’t mean she’s not their biggest fan, even when they’re having a bit of fun at her expense. Barrymore loves that her daughters have a sense of humor, so it’s the cutest moment to see the Emmy-nominated talk show host cracking up over her oldest daughter’s hilarious “improvements” on her work. 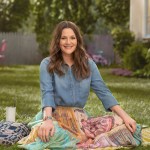 Barrymore took to Instagram to share Olive’s artwork embellished on the cover of her mom’s new magazine, appropriately titled, Drew. The talk show host and actress couldn’t help but laugh about the mockery of it all.

With the simple caption, “Olive’s cover art…” Barrymore breaks down the details of Olive’s work.

“I couldn’t help it but I have to share this because it just makes me so happy. So my daughter took one of the copies of the magazine … and she just put really hilarious spins on not only my face but much more important, clever tag lines.”

Barrymore goes on to read the funny additions the soon-to-be 9-year-old added — drawing what looks like a classic mustache on her mom’s cover picture, and rewriting the magazine’s cover lines. (Our favorite example: “Yes Chef! Fresh & Easy Summer Recipes” got the addendum, in Olive’s writing, “…That Taste Like Poop.”)

Clearly, Olive inherited her mom’s goofy sense of humor and love of fun — and the two seem to enjoy a dynamic that’s different from Barrymore’s own childhood relationship with her mother. As a guest on singer Demi Lovato’s podcast, 4D With Demi Lovato, Barrymore shared how her difficult relationship with her mother, Jaid Barrymore, influenced how she has chosen to parent her own kids. Barrymore says she and Jaid were more friends than parent and child — and that dynamic caused her to “completely relearn what parent-child dynamic is.”

“I’m having amazing real realizations about my own kids and how little I understood what boundaries were,” Barrymore said during the podcast. “I didn’t have them growing up and when you’re a parent, you try to compensate with so much love and you’re almost afraid to get into the argument sometimes, you’re just trying to survive the day, so you let things slide and you’re like, ‘Oh, there should have been a boundary in that place probably a while ago, but I guess I’m only realizing that now.’”

“Like, I’m your parent, I’m not your friend,” she said, adding, “You can be friendly and do activities, it’s not that it has to be this strict relationship.”

We’re guessing that there’s a lot of love, creativity, and fun in their household with Barrymore leading the way!

Read about how Heidi Klum, Angelina Jolie, and more celebrity parents co-sleep with their kids.