Doja Cat and SZA are the goddesses of their own planet in the video for their new collab, ‘Kiss Me More.’ One very lucky star from ‘Grey’s Anatomy’ gets to be the on-screen love interest who kisses them more!

Doja Cat began the next chapter in her career on Friday (Apr. 9) with help from none other than SZA. The two teamed up for “Kiss Me More,” off of Doja’s forthcoming Planet Her, an album title that is visually translated into the music video for Doja and SZA’s new collab. “Planet Her” is pink and peachy, full of ethereal outfits, and has invited one lucky (and very handsome) visitor from Planet Earth (where he plays a doctor on Grey’s Anatomy).

This astronaut is played by Alex Landi, who you may know as Dr. Nico Kim on Grey’s Anatomy. Trading his scrubs for a spacesuit, Alex’s character crash lands on the dunes of “Planet Her.” He is soon invited to a love fest with SZA and Doja, and these sultry scenes are split between solo (and duo) shots of Doja and SZA transformed from Earth goddesses into the goddesses you’d see in a fantasy comic book.

From the aesthetics to the casting of Alex to the song itself, fans were happy to celebrate yet another incredible music video from Doja. “The whole planet her concept and just the music video in general as well is like the one of the smartest and most creative things i’ve ever seen @DojaCat come here lemme kiss ur brain,” one fan tweeted, and another wrote, “doja cat is such an amazing artist and i will never get tired of saying that.. the way she can do any concept and it suits her. no one is on her level!”

Doja announced the collab on Wednesday (Apr. 7) by sharing the single’s cover art: a turquoise SZA facing a pink Doja, both emerging out of a technicolor desert landscape. “I been in a bad mood all day but i’m glad* KMM is coming tomorrow,” she tweeted, with SZA adding, “SAME AND SAAAAMME.”

“Kiss Me More” marks the conclusion to Doja’s Hot Pink era. The 2019 album helped Doja reach a new level of success, thanks to singles “Juicy,” and “Say So,” which include a chart-topping remix featuring Nicki Minaj. Doja also got praise for bringing nu-metal back, when she preformed an amped-up, guitar-fueled version of “Say So” at the 2020 MTV Europe Music Awards (where she also won for Best New Act.) This era was capped off with three nominations at the 2021 Grammy Awards – Best New Artist, Record of the Year, and Best Pop Solo Performance.

“I’ve always wanted to try things,” Doja told SZA in an interview for V Magazine, in which the “Say So” singer shared that her third album, Planet Her, is due this summer. “I commend artists, like you, who stick to something. It feels pleasing aesthetically and very driven. For me, I want to try all these things, but I’m starting to learn what I’m falling into is a lot of the house, disco, vintage-y essences—that’s where my heart kind of lies. But I still am doing shit that I don’t understand. It’s still really fun!” 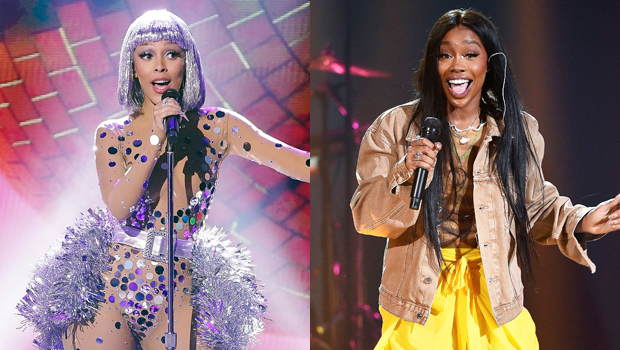 “I wanted to be a rapper before I was a singer at all,” added Doja. “And I always wanted to sing because singing is amazing when you hit a note and you’re like, ‘Wow.’ It’s a feeling that a lot of people can’t really describe. It’s amazing to be able to sing and create melodies and whatnot but I always started off wanting to rap. They’ve just melded together, and I’ve just been able to make those two come together. … But it’s hard. A lot of things are one genre, but a lot of people are putting shit together so how are we supposed to perfectly place things in categories anymore? When experimentation and whatnot is a huge thing.”

SZA also gave an update to her next album while speaking with PopSugar. Fans have been eagerly awaiting a follow-up to 2017’s Ctrl, especially after she dropped “Hit Different” and “Good Days” in 2020. I’ve been catapulted into rushing my album, which I said I wasn’t gonna do,” she said. “I’m just trying to have fun and really let my heart speak and get out of my head.” The results will be unlike anything she has released before. “”I’m different, so how could [my music] not be different?,” she told PopSugar. “So much of me is in my music, it’s literally verbatim whatever’s on my mind, and I see the world way differently than I did [before].”

“Labeling is so dead and so done, and it really does everybody a disservice,” she said, adding that she’s “excited to continue to shatter any boundaries or titles ’cause that’s what has to happen for us to grow.”