For Father’s Day I received a smartwatch. A temporary thing, I tell myself, like time itself, or the finite hours when I might accumulate a decent step tally. Or the night hours set aside to sleep, at the least those hours I designate to lying on a mattress, wondering why I’m not asleep.

Otherwise known as orthosomnia, a word I learnt last week. Most of us are familiar with the syndrome, thanks to tech’s intrusion in the bedroom. If you lie overnight with a whiz-bang gadget below your jimjam cuff then you know orthosomnia first-hand.

The Sleep Health Foundation defines the term as “a tendency to place undue importance on the data from personal sleep-tracking devices”. Not a formal disorder, like its common cousin, orthosomnia blends that same restless stem with ortho-, a Greek prefix meaning straight or correct. 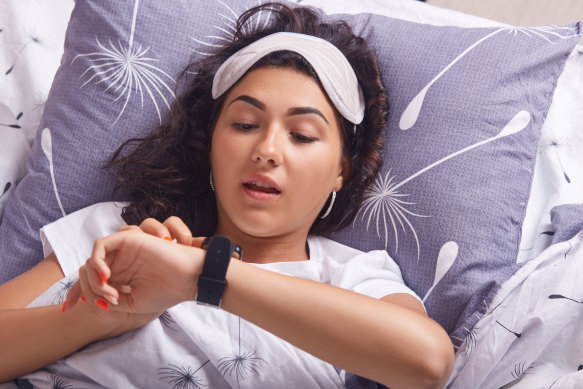 The Sleep Health Foundation defines orthosomnia as “a tendency to place undue importance on the data from personal sleep-tracking devices.”Credit:iStock

Orthodontics, therefore, is the art of correcting teeth. Orthography is literally correct writing, alias spelling. Orthodoxy is the right opinion, allegedly. And orthosomnia is poor sleep owing to an unhealthy obsession with measuring how much sleep one is getting per night, or not in my case. The gist is counting hours instead of sheep.

Dr Moira Junge, a sleep psychologist and the foundation’s chief executive, is eager for the neologism to catch, but language doesn’t work that way. Regina George had a point in Tina Fey’s 2004 comedy Mean Girls, telling Gretchen to stop trying to make “fetch” happen. Insist all you like, spread orthosomnia across the canteen, paint it on the walls, but unless others warm to your new word, it will fade faster than a vuvuzela honk.

Keith Potger, our Seeker from September, is keen to make mynonym happen, the musician’s apter label for a palindrome. Perfect on paper, the word reads the same in either direction, as palindromes must, yet that’s no guarantee of success. Mark Demetrius, in fact, a reader responding to Potger’s idea, preferred rotator, an equally nifty name that works on all levels. Despite that, neither may survive. Vox populi will always have the final say.

Right this minute, a tribe of neologists is losing sleep, anxious whether their own coinages will become common currency. Merriam-Webster, as recently highlighted, has unlocked its vestibule of words-in-waiting, those terms on the threshold of widespread existence. Some nominees are certs, such as packing peanuts (polystyrene noodles that cushion a boxed item) and subvariant, oat milk and dumbphone, greenwash and video doorbell.

But plenty waver on the edge, including wishcycling (hoicking rubbish into a recycle bin without checking whether it’s suitable) and brainworm (a nonmusical earworm that lingers in the mind, often a disturbing image or idea). Though my pick among the twilit creatures is bikeshedding, a term born via Parkinson’s Law of Triviality.

Cyril Northcote Parkinson, a British naval historian, is the eponym behind Parkinson’s law, a precept claiming that “work expands in order to fill what time is available for its completion”. Within the same manifesto lies his law of triviality, or yak-shaving as IT types prefer, being our bent to focus on a near-futile task in order to delay a more useful one.

Spider-shagging is the local equivalent, at least the polite translation. Bikeshedding, on the other hand, could see designers of a nuclear power plant spend more time fine-tuning a bicycle shelter for employees rather than attending to the principal building. Any time you finagle over a marginal matter, instead of contemplating the bigger picture, you’re bikeshedding. Annoying? No doubt. Familiar? All too often. But nothing to lose sleep over.

To read more from Spectrum, visit our page here.

The Booklist is a weekly newsletter for book lovers from books editor Jason Steger. Get it delivered every Friday.