Girl, 3, who’s the only person in the world with a rare ‘Benjamin Button’ disease wins millions of TikTok fans with adorable videos of her dancing and making love hearts during isolation

A little girl who is the only person in the world with a rare ‘Benjamin Button’ disease has gone viral on Tik-Tok after heartwarming videos of her in isolation racked up over two million views.

Isla Kilpatrick-Screaton, three, from Leicester, has a strand of mandibuloacral dysplasia – which causes rapid ageing of the cells and gives her an appearance older than her years.

The condition, which starts before birth, is also known as ‘Benjamin Button disease’ because it causes rapid ageing of the cells – a reference to the character in a 1922 short story and 2008 film who is born an old man and ages backwards.

The youngster has become an online sensation since her family uploaded adorable footage of her making a love heart for her mum Stacey.

Clips of the youngster dancing in the garden have also been seen hundreds of thousands of times as she isolates with her family due to her ultra-rare condition. 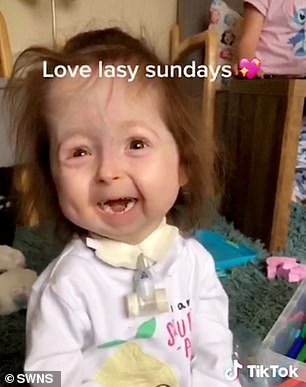 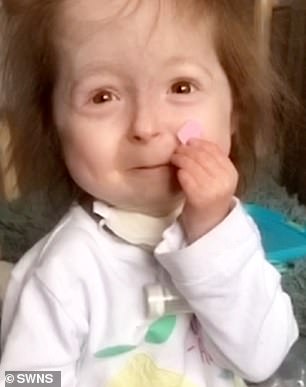 In her adorable videos Isla dances to ‘Oh Na Na Na’ by Slim Burna in the kitchen with Kyle and to ‘Pew Pew Pew’ by Run the Jewels with Stacey in the garden.

Isla’s condition means she is in the high-risk coronavirus category and will have to isolate for at least 12 weeks.

Stacey, 33, and Isla’s dad Kyle, 36, decided to start making the videos to keep Isla and her sister Paige entertained during the pandemic lockdown.

Builder Kyle said: ‘My daughter Paige started using TikTok and like all young kids these days wanted to be a social media phenomenon.

‘Her mum Stacey set up a family page and we started to make videos to do something positive and keep entertained during isolation. 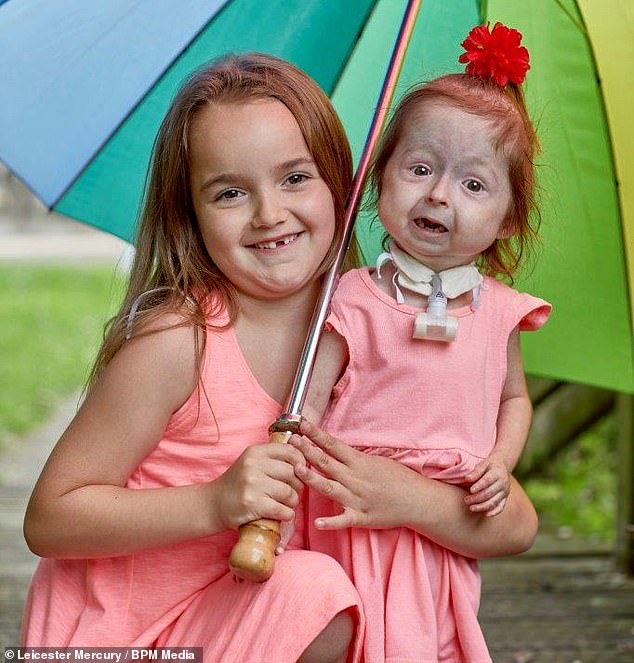 Isla (right) stars in the short videos with her older sister Paige (left), seven. The videos have racked up 2.3 million views

‘We did it just to pass time in isolation very positively, but we couldn’t believe it when one of Isla’s videos got 1.5 million views in 24 hours.

Her parents were left stunned when the clips started going viral on social media app Tik Tok with one video alone being viewed a staggering 1.8 million times.

‘Another of the girls chasing each other around the garden got 20,000 views.. In total her videos have been seen 2.3 million times. It’s incredible really,’ Kyle added. 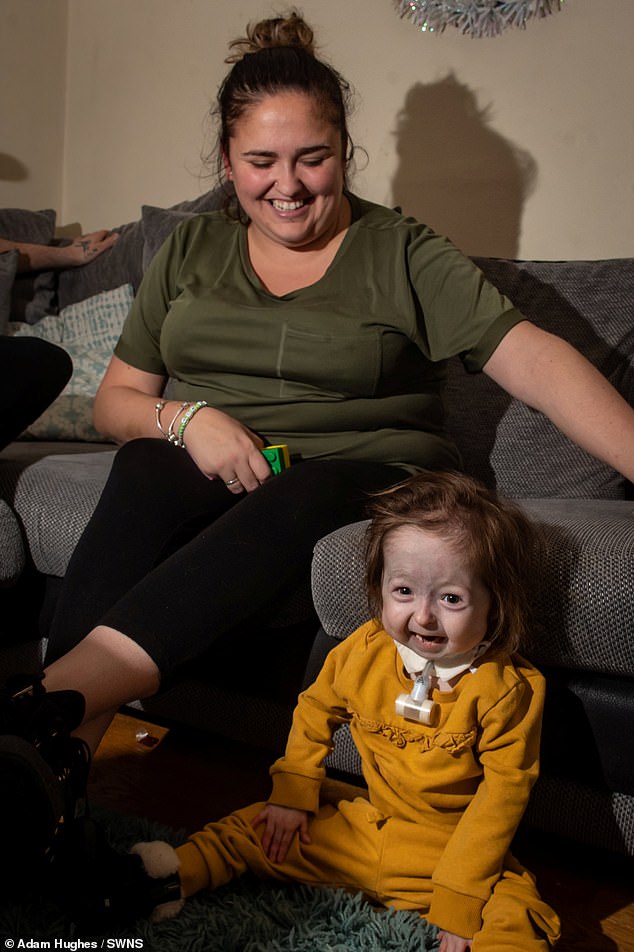 Their mother Stacey (pictured, left, with Isla), 33, decided to start making the videos to keep Isla and Paige entertained during the pandemic lockdown

‘We’ve had loads of positive feedback, with people in the States saying “It makes my day to see your videos” and people here saying “This is making isolation more bearable”.

‘We’re getting people from around the world sending messages about how great the videos are, but we are not doing them for the fame and fortune.

‘We are just being us and we don’t change or play up for the videos. I think that comes across in the videos and is why people warm to them. It is just family fun.’

Isla faces an uncertain future due to a heart condition and very narrow airways, which causes breathing difficulties. 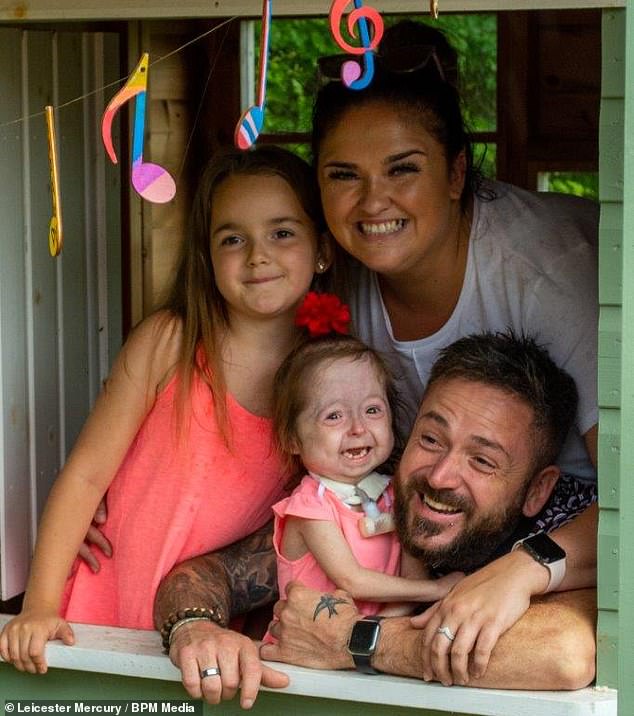 Stacey and their father Kyle, 36, were left stunned when the clips started going viral on social media app Tik Tok with one video alone being viewed a staggering 1.8 million times 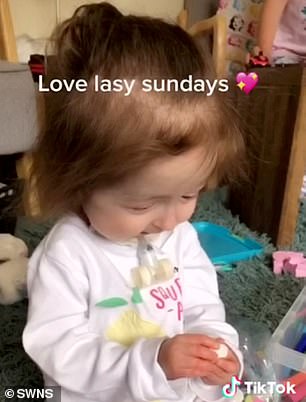 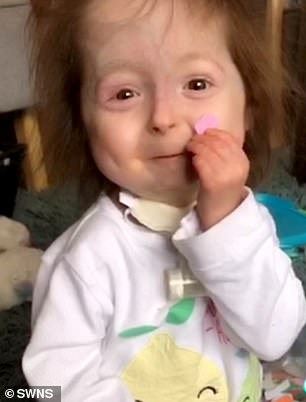 She only weighs 17lbs and has only just started to crawl. Her main form of communication is Makaton sign language and she says very few words.

It means she is having to be extra careful during the COVID-19 outbreak, which has so far claimed over 2,900 lives in the UK.

Kyle added: ‘We’ve had two scares about coronavirus. One day Isla’s temperature went up to 39 degrees and her heart rate went up to 180.

‘We called the normal 111 phone line but they couldn’t respond, so an ambulance came and rushed her straight into hospital. 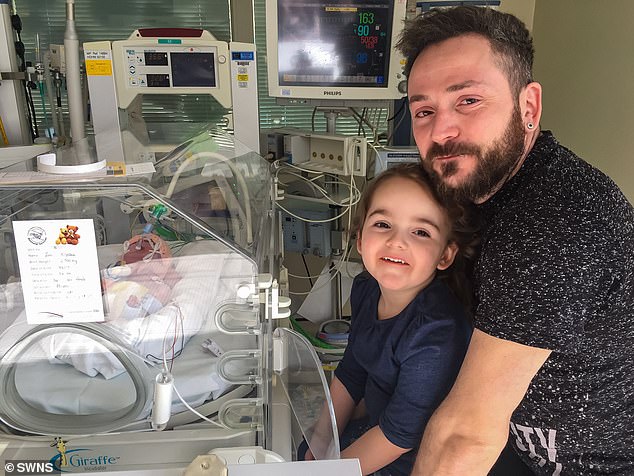 Isla was born with a strand of mandibuloacral dysplasia that causes rapid ageing of the cells and gives her an appearance older than her years. Pictured as a baby with her dad and sister

‘She was in for a couple of hours getting checked for coronavirus and came back clear, after a nervous wait, because it took three days for the results to come back.’

But two days later the community physio team was called out because her temperature and heart rate had spiked again.

Mandibuloacral dysplasia (MAD) is a very rare genetic disorder which has only been officially recorded in medical journals around 40 times.

It is caused by a genetic mutation which happens at random before a baby is born.

The condition causes development problems and may distort the shape and size of a child’s bones, stop their skin from developing properly and have problems with fat and sugar control in the body.

MAD can also cause premature ageing of cells, which makes children with the condition look almost elderly because their skin and hair are thinner than usual.

Other issues include deformed teeth (caused by a smaller than normal jaw), joint and muscle stiffness, and a higher risk of conditions including type 2 diabetes, high blood pressure, hardened arteries, kidney disease and heart disease.

The condition is caused by a genetic mutation which must be passed on by both parents. Most people with the mutation carry it but aren’t affected. If a couple who both carry it have a child, the child has an approximately 25 per cent chance of developing MAD.

‘They took swabs and these results also came back clear, so she was given antibiotics to deal with the infection. The main thing was that it wasn’t coronavirus,’ he added.

But while Isla was unwell, Paige had been learning about the virus at school

Kyle revealed: ‘At the time when the schools were closing, Paige came home in tears one day saying “I’m scared about Isla dying”.

‘That really hit us hard. We hadn’t realised Paige was so aware of it and it opened our eyes to how she knows more than she was telling us.

‘We’re trying to avoid reading things on social media and not listen to the news, just staying at home, going out for essentials and video calling our family.

‘As a self-employed builder I’ve got the stress of not knowing where money is coming from, but it’s nice to spend time at home with the girls.’

Stacey added ‘One of our friends posts a lot on Tik Tok and the most views they’ve got is 17,000, so when we passed a thousand we thought “Oh my God, that’s a lot”.

‘Then one passed 20,000 and the other got up to a million and we couldn’t quite believe it.

‘One of the reasons we do the videos is to try to keep our minds off coronavirus.

‘Paige is aware of the news and has anxiety about it anyway, so we really want to take her mind off it. 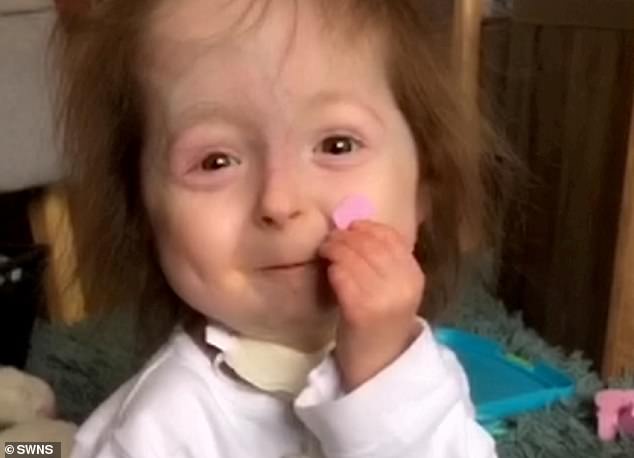 ‘We don’t want this time to be stressful for us so we’re just trying to have fun whenever possible.’

It was a month before Kyle and Stacey, were able to take her home – but she was rushed back to hospital soon after when she turned blue.

She had to be resuscitated after another emergency operation when she was three months old, and it was found her tongue was blocking her airway every time she became upset.

She was diagnosed with mandibuloacral dysplasia in October 2017, a condition that causes a variety of abnormalities involving bone development and skin colouring. 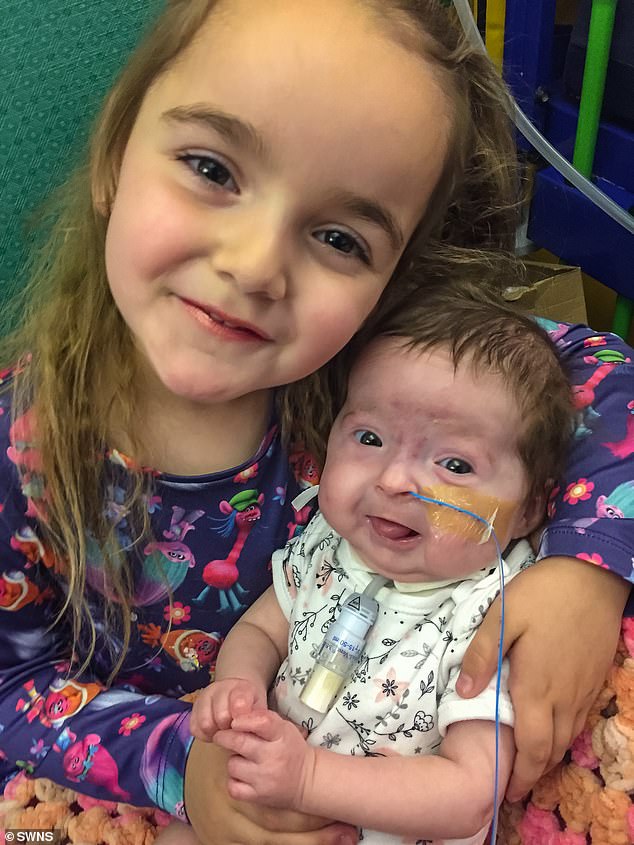 While Isla was unwell, Paige (pictured together when Isla was a baby) had been learning about the virus at school and worried about her sister’s health

Stacey, who gave up being a teaching assistant to care for Isla full-time, said: ‘It takes a lot out of the family.

‘When we had the diagnosis the genetic consultant said Isla is the only one in the world to have this particular misspelling of the gene which causes the mutation.

‘We were light-heartedly told to ‘get Googling’. Even with the rarest conditions there is a network of carriers, but we don’t even have that.

‘They couldn’t tell us how she is going to progress. No one else has the mutation of the gene which causes this deficiency.

‘We’re told her condition isn’t life-limiting but we just don’t know for sure as her case is so unique.’