Jess* was picked up by her mother from Perth airport on Friday night after a gruelling journey home from Guatemala.

But it wasn’t the homecoming she envisioned. 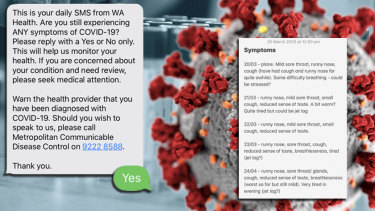 Jess* has shared her experience after she contracted COVID-19 while overseas.

Jess’s mum was happy to see her daughter return home after three months of trekking through Central America but the pair were both wearing masks and her mother was wearing gloves and, rather than the traditional loving airport embrace, they exchanged welcome homes from a distance.

And it's fortunate they did, because on Monday Jess, a fit Perth woman in her mid-20s, was added to the growing list of WA’s confirmed COVID-19 cases.

During her journey home, Jess started noticing a cold coming on and decided to start a short diary of her symptoms in her phone – just in case.

After landing she even notified airport staff of her symptoms, but at that stage she thought her sanitising regime had been vigilant and the culprit was three days of intense travel, not coronavirus.

As soon as Jess arrived home she moved into an Airbnb and began her two-week isolation, which is when it became apparent something wasn’t right.

“I felt no worse than I've ever felt when returning from a trip.

“It was on Saturday night when I was eating dinner that I realised it didn't taste like much.

“It was the next day and I was reading an article and someone mentioned they had really mild symptoms of coronavirus but one of the things they noticed was they had a reduced sense of taste and smell.”

Jess said the lack of taste persisted on Sunday and Monday, so she decided to get tested.

On Wednesday she got the call to say she had tested positive. 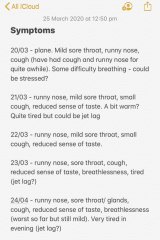 Jess began taking notes of her symptoms on the plane on March 20.Credit:Jess/Supplies

Fortunately for Jess, her symptoms are mild, with only the lack of taste and breathlessness separating it from a common cold.

Speaking to WAtoday over the phone, there was a slight croakiness to Jess' voice that sounded like the tail end of a sickness.

“I’m ok but I’m definitely feeling more breathless,” she said. “Breathlessness is a symptom of people being stressed and I had to rush to fly home and I knew I was flying with a whole lot of sick people so I assumed that's part of it. In all honesty, this feels like the type of cold that people wouldn't think anything of.”

While she counts herself lucky, Jess is acutely aware of the risk the virus could have to others.

“I am in my 20s, I’m quite healthy and literally the weekend before last I had climbed a volcano and I am noticing the breathlessness … so I can only imagine what it would be like for someone who is older and has some kind of condition,” she said.

The most frustrating part of Jess’ ordeal was seeing a number of people ignore directions from airport staff to notify them if they had any COVID-19 symptoms on her flight back to Perth.

“It held me up by an hour and a half but I’d still do it again and it didn't change anything because they're making everyone isolate anyway," she said. 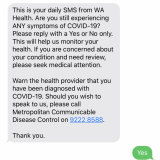 Jess has been receiving these text messages from the WA Health Department.Credit:Jess/Supplied

“[My symptoms were] so mild but I still have it, so for all those people who were literally hacking up a lung on the plane, they might not have it, but they have something.

“People should just be honest. I just think that is really negligent on their behalf and really disappointing.”

Jess’ new daily routine is catching up with friends digitally and responding to a Department of Health text message asking whether she still had symptoms.

She said the advice provided to her was that she could come out of isolation when her symptoms disappeared for three days or at the end of her quarantine – whichever comes last.

With her symptoms diary, that will be something much easier to determine.

She said it was disappointing health authorities weren’t testing patients for the virus to confirm they had beaten it.

“I think it is really difficult that they don’t test you to make sure you're negative before you're allowed back out because obviously some people are completely asymptomatic,” she said.

“Everyone just needs to do their bit and stay home. The more we work together on this the faster it will all be over.”

*WAtoday agreed to change Jess' name to protect her identity.