An AFL footballer has issued a desperate plea for his brother to return home, as a major maritime search continues into the disappearance of two young fisherman.

Geoffrey Hibberd, 33, and friend Jason De Silva, 20, remain missing almost 2½ days after they set out on a fishing trip in a choppy Western Port Bay in their tinnie. 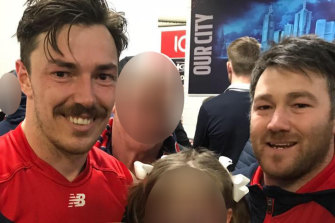 Their three-metre, outboard-motor-powered aluminum boat was found on the south coast of Phillip Island at 11am on Monday, without the men inside.

Mr Hibberd's brother, Essendon-turned-Melbourne defender Michael Hibberd, said it was a "very difficult time for the family" and issued an anguished appeal for his brother to return.

The 30-year-old footballer is known to have a close relationship with his older brother, who has been a key supporter of the dashing backman's career.

In the same Instagram post, the Demons player posted a series of family photos with his brother, including images from a wedding and a jumper presentation ceremony.

The search for the men has continued into its third day, with water police, air wing and State Emergency Service searching the almost 15 kilometre coastline from Point Leo to Flinders.

On Monday, friends and family of Mr Hibberd gathered at Flinders Pier, where the fisherman began their journey at 6am on Sunday.

Temperatures around Flinders dropped to 9.5 degrees on Sunday after 6.4 millimetres of rain. Wind gusts peaked at more than 60km/h on Sunday morning.

A friend raised the alarm shortly before 9pm on Sunday after he couldn't get in touch with the men.

Police say they found the missing boat washed up on rocks at Pyramid Rock on the south coast of Phillip Island, about 11am on Monday.

Police have been told the men regularly fished off the coast, west of Phillip Island, in their small boat.

Recreational fishing has been banned in Victoria under the state's stage 3 restrictions to contain the coronavirus, with on-the-spot fines of $1600.

Last week Premier Daniel Andrews said he would not consider reversing the ban, because the slowdown had helped to flatten the curve of new cases.

Police have urged anyone with information about the missing men to contact authorities.