Victoria’s mandated government “check-in” system comes into effect on Friday, more than six months after then-chief scientist Alan Finkel recommended all states adopt a single app to help contact tracers quickly work out where people with COVID-19 have been. 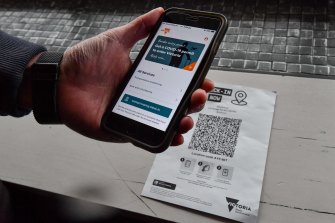 Victoria has lagged behind other states in having a single, simple check-in app to help contact tracers.Credit:Joe Armao

Until now, Victoria has allowed 16 third-party QR code systems as well as its own to be used in places like cafes, gyms, pools, large events, night clubs and real estate auctions. All other states and territories have already mandated a single app for businesses in their jurisdictions to use.

Senator Hume, a Victorian whose portfolios include the digital economy, said states such as NSW had proved an efficient and harmonised QR system was essential to contact tracing efforts. Having multiple systems was unnecessarily complex and wasted time.

It was a “clear failure” of the Victorian government that the single system was only starting on Friday, she said.

“It’s beyond irresponsible that even Victoria’s state Parliament wasn’t using the Services Vic check-in until this week,” Senator Hume told The Sydney Morning Herald and The Age. “As Victoria’s citizens sink into yet another spirit-breaking lockdown, it’s clear lessons haven’t been learned and our contact tracking and tracing system remains hopelessly inadequate.”

“I just beg Daniel Andrews to get NSW in, get [NSW Premier Gladys Berejiklian’s] bureaucrats in and just, whatever they’re doing, do the same,” she told Sky News.

Dr Finkel’s report on contact tracing systems, handed to national cabinet in mid-November, said states should use a single app within their jurisdiction with a simple “click and enter” method. It highlighted the ACT’s Check In CBR app, describing it as simple, effective and centralised.

Victorian Chief Health Officer, Brett Sutton, on Wednesday encouraged everyone to use QR codes wherever they saw them, “whether you’re going there for one minute or one hour”. He said there generally had been good use of the various check-in systems.

The ACT started using its app in September. It has since been adopted by Queensland, Tasmania and the Northern Territory. NSW and South Australia both added check-in options to their existing government services apps.

In SA, using the government QR system has been mandatory since December 2 while in NSW, businesses had to use it from January 1. The West Australian government made use of its check-in app mandatory from February 2.

Federal opposition health spokesman Mark Butler said the importance of state-based QR code systems had been heightened by the failure of the Commonwealth’s Bluetooth-based tracing app to turn up unknown contacts.

“Yes, of course, what we need are strong QR code systems across the country that enable contract tracers to do their job,” he said. “The events of the last few days are a sober reminder to everyone in the Australian community, to all of us, not to be complacent about the use of QR codes.”