A film-maker who sets out to shock ought not be shocked when we are shocked. In Titane and her debut feature Raw (2016), French writer/director Julia Ducornau has been pushing boundaries and buttons to do with damaging the human body.

Raw was about a vegetarian who became a carnivorous killer when forced to eat a rabbit’s liver at vet school. At its debut in a midnight slot at Toronto, two people fainted, giving the film an instant buzz on social media. 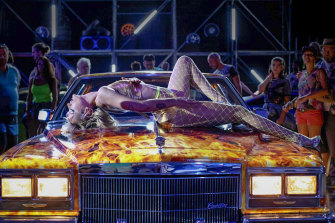 Ducornau has that the frenzy on social media infuriated her, partly because it was fanned by people who had never seen the film, but what did she expect? She is a provocateur. Her films provoke outrage, trying to shake us out of a torpor induced, allegedly, by modern life and imagery.

She has acknowledged a debt to David Cronenberg but Titane reminded me also of the German bad boy Michael Haneke, whose film Benny’s Video provoked similar feelings of revulsion almost 30 years ago. They’re in a rare enclave – European art film-makers who use screen violence to critique screen violence. It’s easy to get confused about intentions when you are wincing and hiding your eyes.

In July, Ducornau became only the second woman to win the top prize at Cannes – the Palme d’Or – so it is safe to assume the jury led by Spike Lee saw more than shock value, but what? It’s as hard to classify the film as to discern a coherent argument.

I have read interviews where she explains her intentions, but I’m not sure those intentions are legible on screen. That’s not such a serious criticism: if a film swirling with ideas takes huge risks, that’s always exciting. Or as Kubrick might have said, logic is over-rated.

That said, Ducornau’s risks here go beyond the brave; foolhardy might be a better word. A young girl has a titanium plate inserted in her head after a car accident, in which her father was driving. Fifteen years later, she’s works at a motorshow that seems more like a strip club, somewhere in the south of France.

Alexia (Agathe Rouselle) writhes around on top of a muscle car, then kills a cheeky punter in the car park with the chopstick she uses to hold up her hair. While washing off the blood, the muscle car gets all rowdy – and this time, she accepts the car’s advances, in a scene directed mostly for comedy (sort of like Herbie Does Dallas, if you get my drift).

Alexia goes on the run, cutting her hair and breaking her own nose to change her appearance. She meets a fireman (Vincent Lindon) whose son has been missing for more than 10 years. He’s only too happy to believe that this pale, tattooed “boy” is his long lost son. Alexia becomes Adrien.

At its core, Titane is a love story, in which two monstrous people find each other. That is Ducornau’s point – to make the extremes of character so extreme that we are forced to examine where we place our own limits on empathy and understanding. Alexia kills half a dozen people in the first reel. Ducornau wonders if she can bring us to care for her, after we’ve seen her do these monstrous things? And can Alexia find something in her heart other than violence?

To some extent, it might depend whether you think that earlier scene, where she dallies with the Detroit iron, is worthy of serious interpretation. Ducornau takes the story a long way from Kansas, courting ridicule. Horror fans love that kind of thing, but I’m not sure this films sits comfortably within that genre, either. It’s messy and showy about its intellectual pretensions. Horror that takes itself too seriously usually gets a drubbing. Titane walks a fine line between its wild ambition and its sometimes silly effects.

Cronenburg is a master at making us suspend disbelief, for the sake of where the story takes us. Ducornau has real gifts as a story-teller but she has less clarity of purpose, at least so far. It’s a fabulously weird and original tale. Two fine lead performances carry us through the sometimes misty forests of meaning, to a finale that defies description. Seriously, OMG!

TV, movies, Find out the next TV, streaming series and movies to add to your must-sees. Get The Watchlist delivered every Thursday.