The last time Spiro Dimitriou saw his father, he played him some of his favourite Greek songs and watched his Dad's eyes light up.

Four days later, his 73-year-old father John was gone. He died alone in a Melbourne hospital two weeks after contracting coronavirus at St Basil's Homes for the Aged. 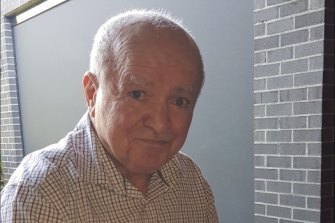 John Dimitriou, 73, was a resident at St Basil’s Homes for the Aged in Fawkner.

"I was waking up every hour thinking about my poor Dad. All alone, frail, dying," Mr Dimitriou said. "My mind boggles that this is Australia. This is happening here."

Mr Dimitriou wants to ensure the death of his father was not in vain, as authorities struggle to contain deadly outbreaks within the state's aged care facilities.

On Monday, there were 1089 active coronavirus cases relating to aged care settings, of which 139 were linked to St Basil's Homes for the Aged in Melbourne's Fawkner. Eight of the 13 deaths announced on Monday are linked to outbreaks in aged care.

John Dimitriou had dementia and was in a high-care unit within the facility. Spiro Dimitriou was told on July 20 that his father had contracted COVID-19. The federal government took over the facility several days later. 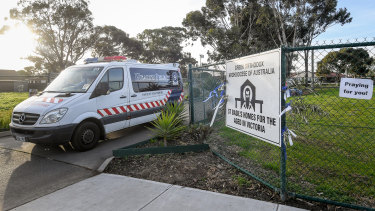 On July 24, a doctor called John Dimitriou's children and told them they needed to come and visit as their father was going to die.

"At that stage the death toll was around four [at St Basil's]," said Spiro Dimitriou.

"As I walking out of Dad's room through the main reception, I said to my sisters, there will be more out of here not surviving. My Dad became the 20th."

He last saw his father in person when he was allowed to visit the aged care home on Thursday.

"I had some of his favourite Greek songs on in the background and he was just nodding with his eyes," said Spiro Dimitriou. "I could see it in his face and body, there was no more resilience."

John Dimitriou was one of the last people to be evacuated from the facility to hospital on Friday. He died early on Monday at the Austin hospital.

Worksafe confirmed on the weekend it has started preliminary inquiries into at least 10 aged care homes in Victoria, including St Basil's.

Spiro Dimitriou wants authorities to learn from mistakes made at the facility so other families are spared the same grief he is experiencing.

"We didn't learn anything from Newmarch House [in Sydney], nothing from Italy, from what was going on around the world," he said.

"It was nightmarish from the start. From St Basil's management to the federal government takeover. You would not think this is how it should be. Left in those conditions, the fact they were so lonely was quite disturbing.

"These deaths should not be in vain. Massive change is needed in the aged care sector because each and every one of us will go down that path at one stage or another."

John Dimitriou came to Australia from Greece in the early 1960s, living with his siblings in Fitzroy where he got a job on Brunswick Street. 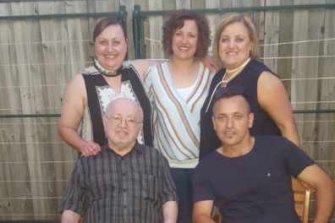 Mr Dimitriou with his three daugthers and son Spiro.

He met the "love of his life", Voula, in Melbourne. They married, moved to Thomastown and had four kids in consecutive years from 1969 onwards.

He had nine grandchildren and one great-grandchild.

Voula died in John Dimitrious' arms 14 years ago after a heart attack.

"He was never the same," Spiro Dimitrious said. "He didn't know how to handle it."

He had several strokes and moved into St Basil's more than two years ago.

"I will remember him as a fun, loving, caring man," his son said. "He used to love his beer at the pub with his mates. He was a mischievous larrikin but would take shirt off his back for you."

The family are now planning his funeral.

"I just want to bury my Dad with respect and dignity that every person deserves," Spiro Dimitrious said.

"This has to change. This can't happen again."