“We’re telling you that no one should be out here because it’s dangerous, but we’re sending you out there and we’re not giving out any masks.” 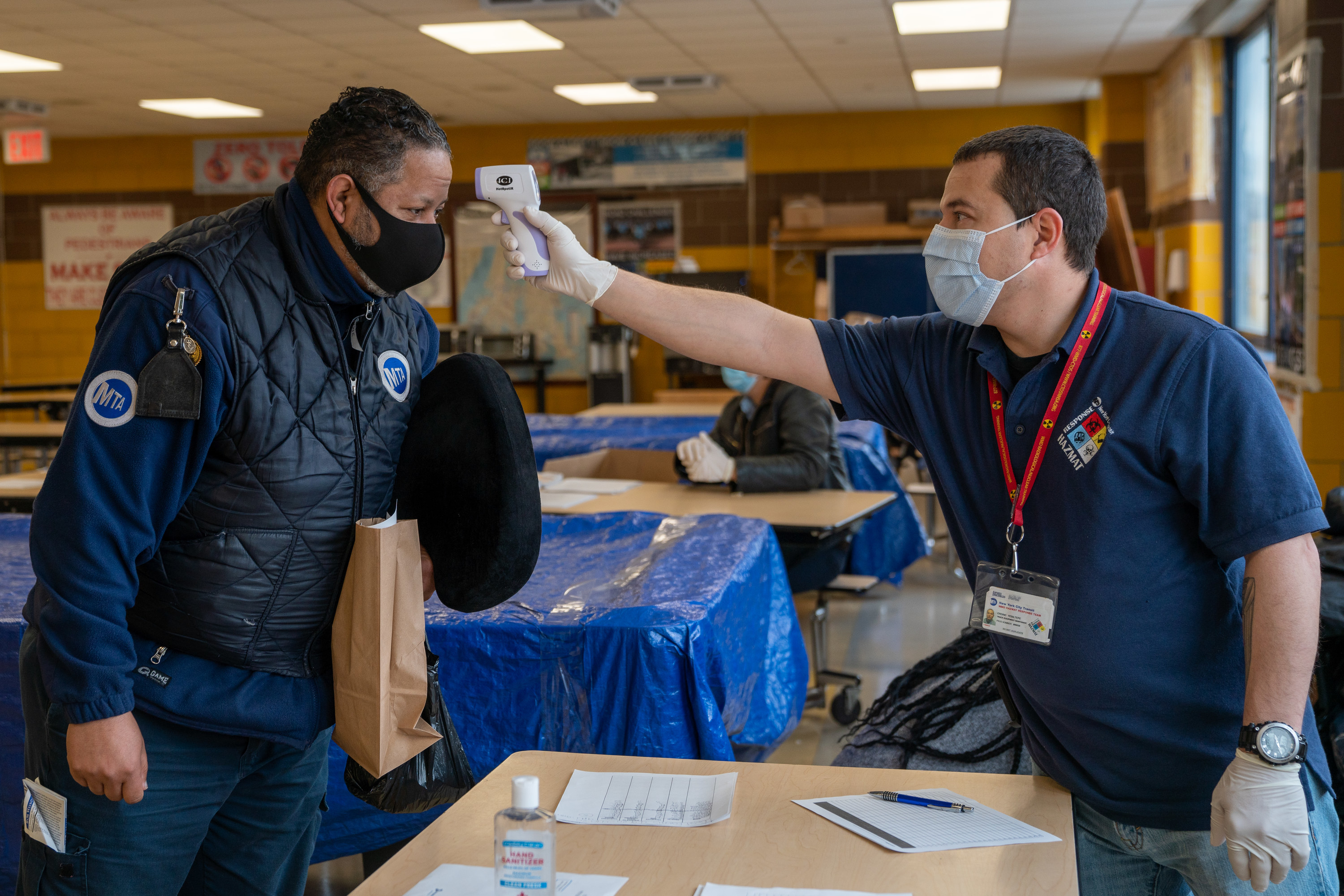 Javier Camillo an MTA bus driver has his temperature taken before starting his shift at the West Farms Bus Depot on April 10, 2020 in New York City.

The journalists at BuzzFeed News are proud to bring you trustworthy and relevant reporting about the coronavirus. To help keep this news free, become a member and sign up for our newsletter, Outbreak Today.

For one essential worker, there’s a specific time when coronavirus-related anxiety is at its highest: the moment she pulls into a crowded bus stop.

Forcing people to enter the rear doors helps a little to ease the tension for the Brooklyn bus operator who is still working during the pandemic. But now that the Metropolitan Transit Authority has restricted passengers from sitting in seats closest to the driver, the bus seems even more packed.

“I’m more concerned about my son than myself, of course, because he has an underlying health issue as well,” she told BuzzFeed News to explain why they decided to buy their own masks and cleaning products a month before the MTA began distributing them to workers. The New York Times reported some MTA employees were reprimanded for using precautionary measures themselves.

“It was every man for himself,” she said and added that once the MTA began to distribute masks, it only provided one per employee. “I’m very nervous. I think I got more serious about the situation with the passing of coworkers.”

As of Monday, 71 MTA employees have died of COVID-19, the disease caused by the novel coronavirus. The first MTA death occurred on March 26, a day before transit union officials negotiated a deal with the MTA to provide masks to workers, according to Jim Gannon, a spokesperson for transit union workers. Bus operators — whom the city considers essential workers — account for at least 20 of those deaths.

The bus driver, who declined to be named for fear of losing her job, is one of hundreds of thousands of Brooklynites still working essential jobs, even as the borough is hit hard by the coronavirus. Twenty-eight percent of New York City’s essential workers live in Brooklyn — the most in any borough — and the vast majority of them are people of color. In Brooklyn, the number of deaths outpaced those in Queens on Sunday. Brooklyn has more than 2,606 confirmed COVID-19 deaths and 865 “probable” COVID-19 deaths, according to NYC data released April 19.

“It’s not a secret and it’s very clear. … We divided the city at the beginning of the coronavirus into essential employees and nonessential employees and that term was used all over the city,” Brooklyn Borough President Eric Adams told BuzzFeed News during a phone interview last week. “I heard it. I said, ‘This is coded language.’”

Black, Hispanic, and Asian people make up more than 70% of the city’s essential workers, including transit, childcare, health care, cleaning service, and postal employees. More than 40% of transit workers are black and 60% of frontline cleaning workers are Hispanic, according to a report released in March by New York City Comptroller Scott Stringer’s office. In addition to racial data on frontline workers, Stringer, who is running for New York City mayor, offered solutions to protect those people, including free protective gear, hazard pay, and guaranteed health care. 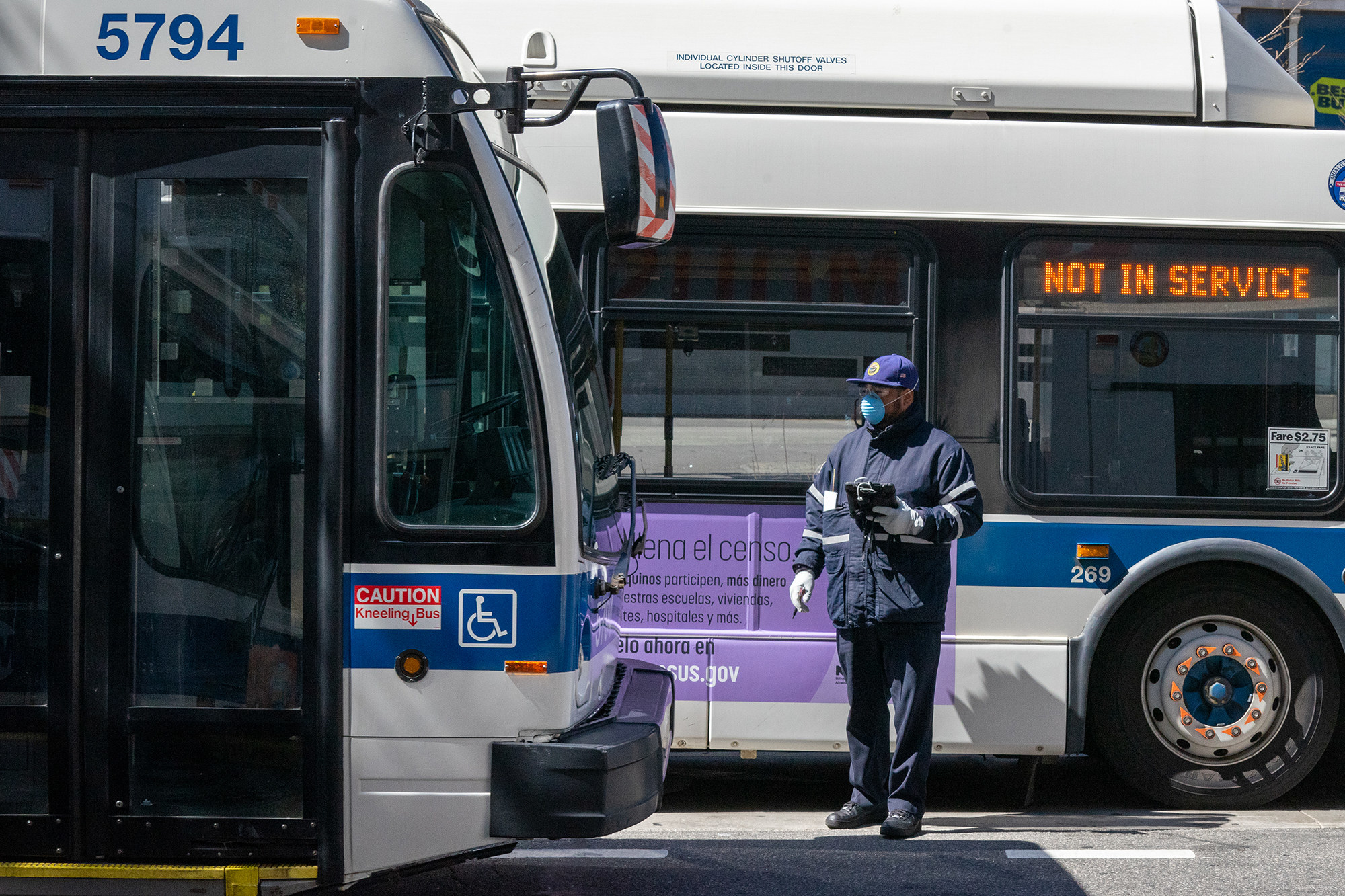 A Metropolitan Transportation Authority employee wears a protective mask at a bus hub in the Bronx, New York on April 2, 2020.

“Black and brown people went to service this city and then went home and spread the virus among their citizens,” Adams told BuzzFeed News. “Just look at the numbers.”

Adams said he personally has lost five close friends in the span of a week. “The impact is very real, and you become almost even afraid to pick up your phone,” Adams told BuzzFeed News, saying he was haunted by words, “Did you hear…”

The same racial divide is consistent in Milwaukee, Chicago, New Orleans, and other major cities and experts say the disparity adds to the outsize number of COVID-19 cases throughout black and Latino communities.

“Essential workers are absolutely more vulnerable,” Mary Osirim, provost and professor of sociology at Bryn Mawr College, told BuzzFeed News. “While there are certain professionals that are of every ethnicity and race in the country, it is also the case that many on the front lines are low-wage … low-status workers and they’re often very disproportionately African American and Latinx.”

And many lack access to basic protective gear as they continue to go to work. Adams, who is also running for New York City mayor, began addressing that problem on March 25, when he held a press conference in front of a Brooklyn MTA bus depot and demanded, “Give us the goddamn masks.” 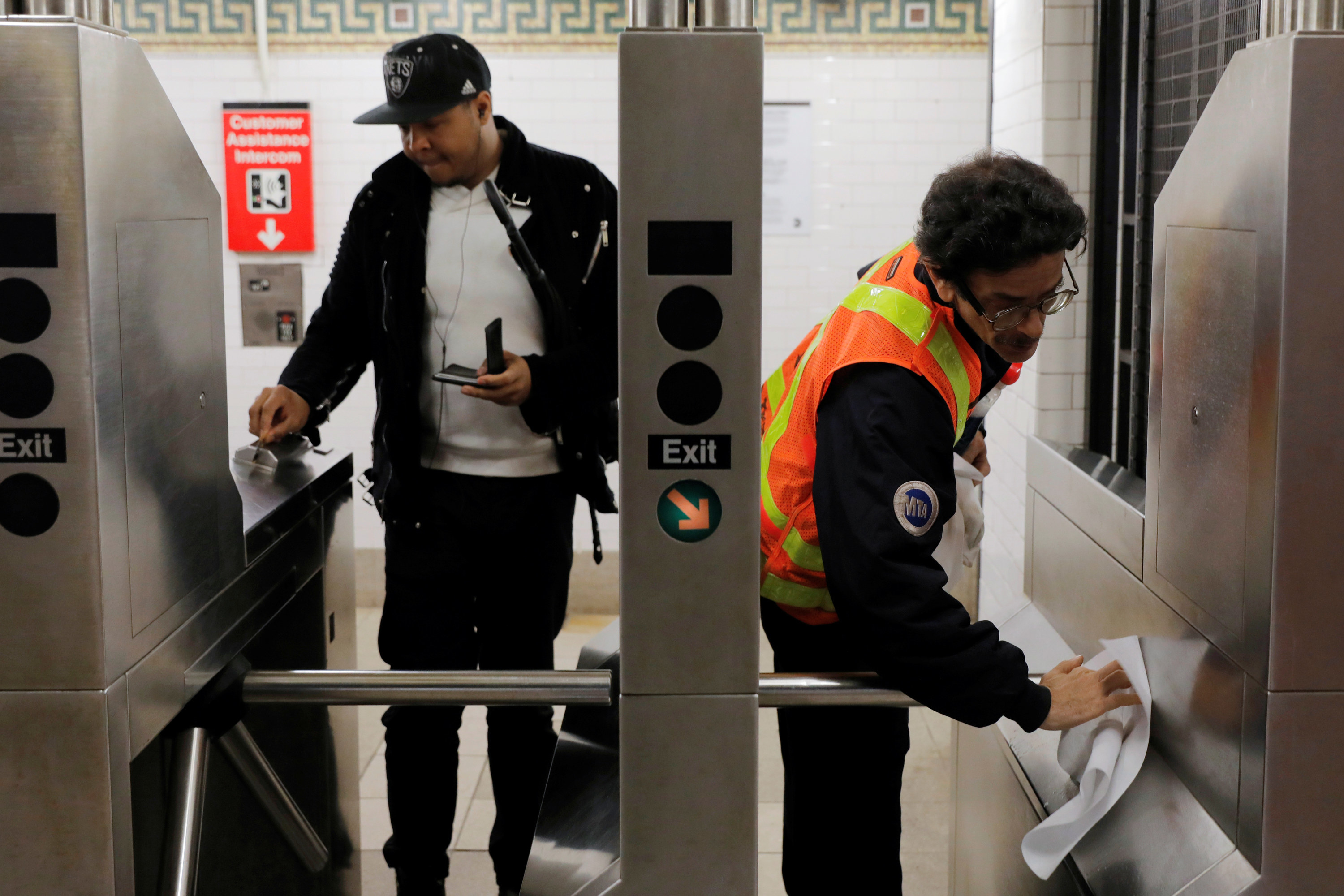 An MTA worker wipes down a turnstile in the subway in New York City, New York, March 10, 2020.

Employees at the US Postal Service have similar concerns, especially mail carriers who interact with close to 1,000 New Yorkers every day at work. African Americans make up 21% of postal employees and 13% of the US population.

One USPS worker in Brooklyn told BuzzFeed News they now have a ritual when they get home from work: “I immediately remove my shoes, my postal pants…I take off my jacket, my sweater and coat and I leave everything in my room in a corner. When I had Lysol I would spray everything down.”

The USPS worker is practicing social distancing inside their home as well, so as not to infect vulnerable loved ones — hugs and kisses are replaced with a distant “hi.”

The same USPS employee told BuzzFeed News that protective supplies, including gloves, began to dwindle as early as March 1. More pressing is the lack of communication from management amid a public health crisis, they said.

“We started hearing [from coworkers] ‘at this particular post office, this person is infected,’ but [management] wasn’t saying anything. I noticed a clerk went out sick,” they said, adding that two more followed within the same week.

There’s signage posted about proper hygiene, but no one from management had personally spoken to staff at this particular Brooklyn branch as of late March. “We’re finding out things on our own, like ‘Why is this person not here? Why do we have this skeleton crew?’” At a separate Brooklyn USPS location, employees said management gathers employees for updates on COVID-19 but not on a daily basis.

“They’ll call everyone around the desk and basically read off what they have.”

Approximately 1,000 of the 630,000 employees have tested positive for COVID-19 “with some deaths,” USPS spokesperson David Partenheimer told BuzzFeed News in a statement.

One USPS employee contrasted the coronavirus response with the 2001 anthrax scare, when letters carrying spores that caused the infectious disease were mailed to news outlets and elected officials, resulting in five deaths and 17 injuries.

Adams also pointed out that while the CDC specified susceptible communities, there is no government plan to protect the most vulnerable. Black people are at greater risk of illnesses that present high risk for severe cases of COVID-19, including diabetes and heart disease. Adams himself reversed his diabetes diagnosis by exercising and changing his eating habits in 2018,

“There was not one plan that was rolled out that said ‘let’s go after the people who we know if they get it, they may die from it,’” Adams said. “Our plan was an intervention, not prevention. If you look at over 60, preexisting conditions, diabetes, respiratory issues, that’s [the New York City Housing Authority]. That’s why I was at NYCHA handing out masks and information to NYCHA residents.”

Experts have said there’s an information gap for some black and non-English-speaking New Yorkers on the front lines because of inconsistent work hours and differences in the way people consume news. Mayor Bill de Blasio announced a $10 million campaign aimed to inform communities hardest hit by the disease that will include robocalls and flyers directly to homes. The campaign will run in 15 languages and follows an $8 million effort launched early March which ran ads in English, Spanish, Mandarin, and Cantonese. Experts also suggested targeting social media as a part of city-sponsored ad campaigns to counter the misinformation circulating among younger audiences and New Yorkers who speak languages other than English.

“Everybody don’t wake up in the morning and run and get the New York Times and listen to Trump, Cuomo, and the mayor’s briefings,” Adams told BuzzFeed News. “We’re talking in echo chambers. You know who we’re talking to? We’re talking to the 30% who can telecommute.”

If you’re someone who is seeing the impact of the coronavirus firsthand, we’d like to hear from you. Reach out to us via one of our tip line channels.