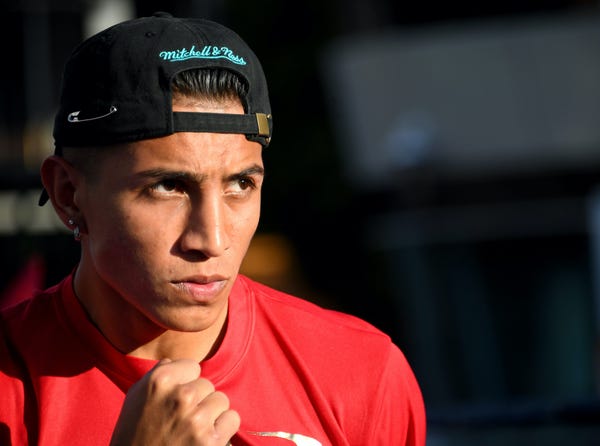 The 25-year-old American won the regular version of the WBA super lightweight title in his most recent bout last year. He makes his first defense of that belt Saturday against Ryan Karl in front of a live crowd at San Antonio's Alamodome in Texas.

Barrios told Insider last week that, given all that has happened in the past year — including the coronavirus pandemic which temporarily shuttered major boxing organizations worldwide — it feels longer than 13 months since he last competed.

And though his trainers prefer he approaches fights with caution, he will be happy to trade punches with Karl in an all-out slobberknocker.

"When I get hit, I want to sit there and trade punches," Barrios said. "My corner may not like it, but that's the fighter I am. This will be a fan-friendly fight."

Barrios and Karl compete on an eight-bout card organized by Premier Boxing Champions and broadcast on Showtime pay-per-view in the United States.

The event, which will allow approximately 11,000 fans into the Alamodome, is topped by Gervonta Davis and Leo Santa Cruz's two-weight championship clash.

Barrios told Insider he would have preferred being more active since winning his 25th pro bout last year. "But, again, some things have been out of my control with the whole COVID s— … excuse my language.

"Everything with COVID put everybody's life on pause for a good amount of time. I'm still happy with the way things have gone, I'm still only 25 years old, 25-0, I hold the WBA world title. I'm blessed."

But Barrios has been using the time away from the ring to give back. He took meals for breakfast or lunch to first responders when the pandemic arrived in Texas.

"We stopped by a couple of fire departments, hospitals downtown in San Antonio, police departments. Just to show appreciation for those who were risking it all at the very beginning.

"It was a crazy time, back in March I didn't know when I was going to be fighting again. I was just bored, couldn't even go to a boxing gym.

"I'm used to being so active and I was just thinking, 'What can I do?' Then I turned on the news, seeing the people who still had to work, people keeping things running in the city. And I was like, man, it would be great to help them out."

When Barrios got the call that he was not only going to fight, but do so in San Antonio in front of a crowd, he was so happy he posted the news on social media.

"I shared the news earlier than I was supposed to," he said. "I posted it and got a text saying, Hey, you weren't supposed to tell anyone about it yet! And I was like, oh. It's too late, everybody knows now. But I was happy."

Barrios is also happy to fight Karl, an opponent he grew up with on the amateur circuit. He was on friendly terms with Karl and said he respects Karl's family. Beating him up is "just business."

He said: "As far as boxing goes, I'm a better boxer. Ryan is a good fighter. Every time he steps in the ring, he'll bring the fight to you whether you like it or not."

Barrios is confident of victory Saturday, and considering his pandemic-enforced layoff, he wants to stay active afterward.

"We'll see what my team has in the works, what their plans are. They have moved my career, honestly … I have no complaints where I'm at for my age.

"I'm here to give fans the best fight as possible."