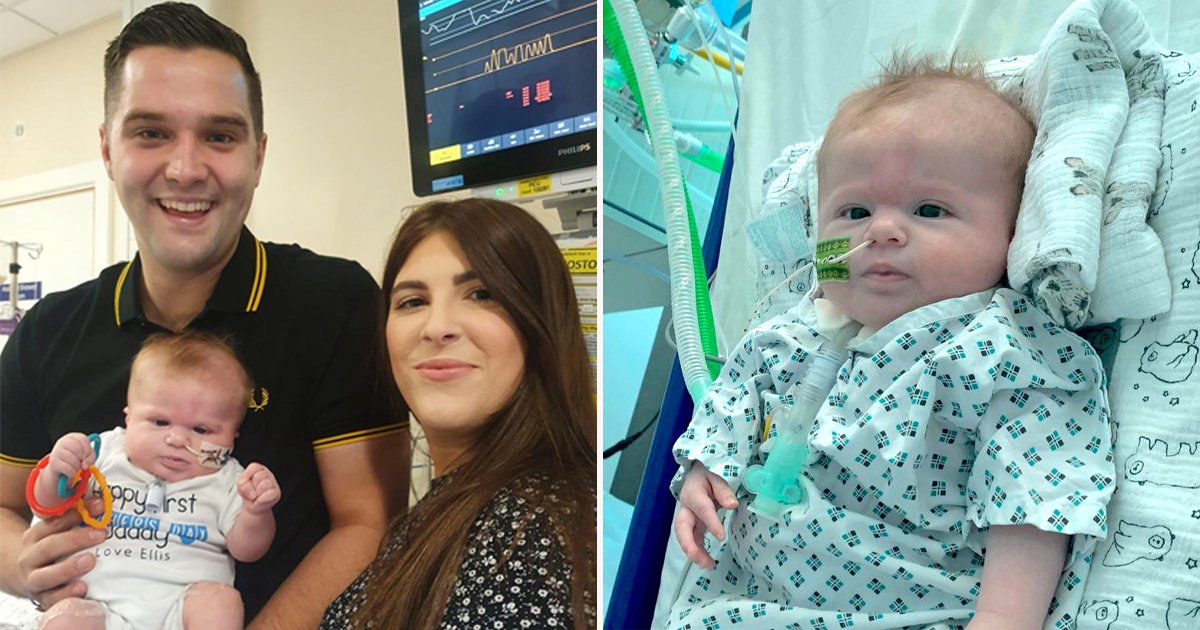 Ellis Melhuish has spent every moment of the first four months of his life in hospital because coming into contact with any sort of germs could kill him.

The little boy has a rare condition called CHARGE syndrome and combined immunodeficiency (SCID), which means he was born without an immune system.

His parents Savannah, 26, and James, 28, were told he wasn’t expected to live beyond his second birthday.

But he became only the 51st person ever in the UK to have a groundbreaking thymus gland transplant at a specialist hospital in London.

The operation replaces the gland that produces white blood cells with 14 donated healthy pieces in either thigh with the hopes that the tot’s immune system kick starts.

‘He’s making improvements every day. Having your thighs cut open is an extremely painful surgery, but he was smiling and happy the next day.

‘It’s been so difficult for me and James but we’re trying to stay positive about it – and we think children are what we make of them.

‘We don’t want to ever set limitations for him and help him grow in life.

‘We don’t know how long Ellis’ life expectancy will be, we simply don’t but we’ll make the most of every day.’

At the 20-week scan, Savannah and James were told he had a complex heart defect and told he would need surgery but would then be fine.

When he was born at Royal Stoke University Hospital on February 20, weighing 6lbs, his parents thought he looked ‘happy and healthy’.

The new mum and dad were able to cuddle him before he was taken to the Intensive Care Unit for further tests before being prepped for open heart surgery.

Savannah, who is originally from Barnsley, South Yorkshire, but now based in Staffordshire, said: ‘They said he might not be breathing.

‘But he came out kicking and screaming and all happy and they let my husband James have a cuddle straight away which we weren’t sure we’d get to do.

‘To us he looked perfectly normal, nothing looked unusual. He was happy and healthy.’

The brave little lad underwent a seven-and-a-half-hour surgery to move his aorta from the right side of his heart to the left.

Doctors realised that he had some unusual features and sent him for genetic tests.

These revealed the ultra-rare SCID, which causes issues with sight and vision, balance, breathing and circulation and affects around one in 10,000 babies.

Infants born with SCID have defects in their immune cells. As a result, these children have problems fighting infections.

Savannah said: ‘When he was born and they told me about his unusual features, and went for genetic testing, that’s when it all started to fall apart.

‘It started spiralling for me and James, we were so confused because they told us it would be fine.

‘But they couldn’t give us anymore answers and we were completely lost.

‘It was absolutely petrifying, I’ve never been more scared in my entire life – it was horrifying.

‘Every time we thought we were getting closer to bringing him home, it got worse and worse. It was absolutely devastating.’

After the diagnosis, Savannah and James, who is a Corporal with the Royal Corps of Signals, were told about the thymus gland transplant.

He is only the 51st person in the UK to have the pioneering surgery, and only the 151st globally.

Savannah added: ‘We have been told we are so lucky that we spent nine weeks at an open ward and he never picked up any infections or viruses because it could have been fatal for him.

‘The story would have been very different and we’re so grateful he has a fighting chance.’

As they knew about his heart condition, Savannah and James had expected to be in hospital with him for four to six weeks when he was born.

Now, they don’t expect to take him home for at least another six months as he recovers from the transplant and starts to build an immune system.

The family are now raising funds for the intensive care unit at Birmingham Children’s Hospital for the ‘incredible work they do’.

She added: ‘The staff at the intensive care unit have been fantastic, and we want to help them and raise funds to get toys for other kids who have to spend months and months in hospital.’