West Australian iron ore magnate Andrew Forrest's Minderoo Foundation has bought 90 tonnes of medical supplies from Chinese suppliers, which will be flown into Perth to be distributed across the state and then Australia.

Mr Forrest said the foundation put $160 million "on the table" to secure the supplies, which had to be paid for with cash in advance, but the WA government would be buying the goods at cost. 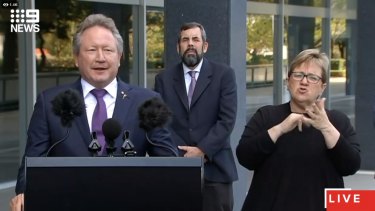 Andrew Forrest addresses reporters about a deal brokered by Minderoo Foundation to equip the WA government with 90 tonnes of medical supplies.Credit:Nine News Perth

He said a cargo plane was leaving Shanghai on Wednesday, with another due in in Perth on Friday and Saturday.

Mr Forrest said the money had to be put on the table to ensure suppliers they were serious about securing the equipment and to ensure supply lines remained open.

"We've been introduced by very powerful people in China to those suppliers," he said.

"They know there'll be instant repercussions if they don't [provide the supplies]."

The billionaire said China had been "great mates" to Australia.

"You've been our mates and I thank the People's Republic of China for protecting our critical medical orders in the face of intense pressure from other nations," he said.

China's consul-general to WA Dong Zhihua said the process of securing the supplies had been overseen by Chinese Ambassador Cheng Jingye.

"You can't imagine how many technical hurdles they had to overcome," she said.

"This outbreak of COVID-19 has caught us by surprise, which proves once again in a no less than tragic way that all mankind lives in a community of a shared future.

"In the face of the pandemic, to help others is to help oneself.

"The Chinese people will never forget that Mr Andrew Forrest and FMG has given us valuable support and assistance during the most difficult period of China's fight against COVID-19.

"The Chinese nation is grateful and always reciprocates others' kindness."

The Minderoo Foundation was also to increase WA's capacity to increase RNA-based diagnostic testing capacity from 400 per day to 10,000 a day, Mr Forrest said.

"We're aiming to use our partners in China and around the world and across Australia to help the West Australian government ramp up its COVID-19 RNA testing by some 20 times," he said.

"If Minderoo is doing that … we welcome every bit of support from every West Australian whether you're a billionaire or a pensioner," he said.

The supplies would be used to meet demand in WA before being sent throughout Australia with the assistance of the federal government.