An albino robin has been forced to lead a solitary life without a mate for the last four years as males do not recognise her without the iconic red breast, it is believed.

Entomologist and birdwatcher John Walters from Devon has been following the bird since 2016 and claims she may have not had a mate in all that time.

Mr Walters claims this lack of sexual interest from males is likely due to the unique pigmentation and the robin’s notably white chest. 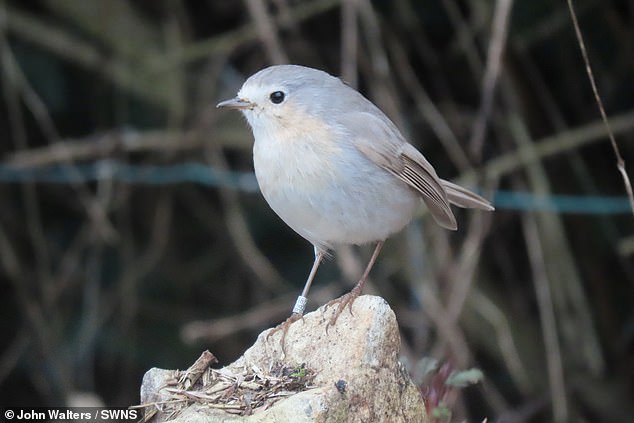 An albino robin missing the iconic red breast of the species has been forced to lead a solitary life without a mate for the last four years as males do not recognise her. The robin resides around Bridford, Devon and is completely white from tip to tail (pictured)

Albinism affects the production of melanin.

This causes it to influence the colour of skin, hair and eyes.

It is a genetic condition that lasts a lifetime but does not increase in severity over time.

Albinism is caused by faulty genes that are inherited from the parents.

It is seen in a range of species, including humans, robins and squirrels.

The robin resides around Bridford, Devon and is completely white from tip to tail.

The unusual colouring is caused by a genetic mutation and makes wild albino robins very rare in the rest of the world.

Also known as snow or albino robins, Mr Walters said he has been lucky enough to discover four in his lifetime.

He said that there were two about a mile apart on the Tarka Trail, and there was another in Lelant, Cornwall.

He said that while he was sure the bird was female she had been unable to pair and mate.

Mr Waltes has been monitoring the bird to see if it could be successful and said now is the time of year when males court their partners and eggs are laid.

He said: ‘It appears this one does not seem to do that. Robins typically only survive for a year, as breeding is so stressful for them. This robin doesn’t seem to change.

‘It is probably the reason it has lived so long.’

Albinism is a natural, if rare, genetic mutation which causes a lack of pigmentation.

It is caused by the inheritance of faulty genes from the parents that affect melanin production.

This can whiten the colouration of skin, feathers and eyes, depending on the species.