Peak medical and worker bodies fear the federal government won’t introduce minimum standards for the amount of time qualified staff spend each day with aged care residents in the May budget or beyond.

The Australian Medical Association and the Australian Nursing and Midwifery Federation (ANMF) have jointly urged the government to implement staffing recommendations in the aged care royal commission’s final report straight away. 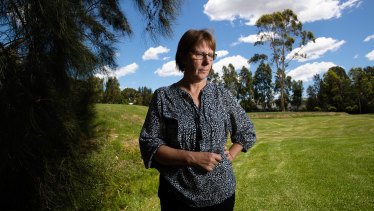 Josie Peacock, who works in aged care, says there is a lot of pressure on staff.Credit:Janie Barrett

Josie Peacock, who has worked in residential aged care for 26 years, said workers were hoping the government would provide enough money to improve workforce issues in the troubled sector.

“We’ve got everything crossed. It’s just a massive problem that needs fixing,” she said.

“I see staff leaving after knock-off time and they are utterly exhausted, physically and mentally. “I’ve seen a staff member leave and she’s actually had to have a rest before driving home because she was so exhausted.”

The federal government has promised a comprehensive response in the budget to the commission’s report, released in March. The report recommended minimum qualified-staff time of 200 minutes per resident, per day, including 40 minutes provided by a registered nurse, and having 24-hour coverage by registered nurses in all facilities by 2024.

AMA president Dr Omar Khorshid said they were some of the fundamental recommendations and must be implemented.

“We are concerned that government will delay the implementation of mandated nurse ratios into future years, partly because that is in fact the recommendation of the royal commission,” he said.

ANMF federal secretary Annie Butler said a sufficient workforce was one of the main factors impacting the quality and safety of aged care.

“If the government wants to do justice by our older Australians … it must provide funding
for the minimum staff time standard and availability of registered nurses 24/7 in nursing homes
in the upcoming budget,” she said.

“When we talk about minimum staff, it has to be across the board, it can’t just be for carers,” she said, including catering, lifestyle and activity staff.

But without change to nursing levels, hospitals would remain under pressure from avoidable trips to emergency and admissions, Dr Khorshid said.

“We estimate there’s something like 27,000 preventable [hospital transfers per year at a cost of over $300 million,” he said.

Aged Care Services Minister Richard Colbeck has previously said the government would deliver its full response to the royal commission’s recommendations to Parliament by May 31.

“The health and wellbeing of older Australians and those working to support them will be key to the widespread reform,” he said.

Senator Colbeck said the government announced $452 million in an immediate response to the royal commission’s final report. That was in addition to the $537 million in support measures following the interim report, and $172.8 million provided in response to the COVID-19 special report.

“I don’t think they are keen on lifting wages, which are not in keeping where aged care should be, I don’t think they’re demonstrating that they’re going to lift the amount of people engaged in the workforce to be able to deliver the quality care that’s required,” he said.

“On the back of that, delivering some kind of mandatory level, I think that’s the third step, and they are not addressing the first two steps.”

Ms Peacock said while many providers did the right thing, funding needed to be transparent and accountable.

“It’s no good throwing billions of dollars of aged care unless you’re going to specify that it has to go to staffing,” she said. “If it’s just going into a pocket for aged care with no accountability then I don’t see much changing.”