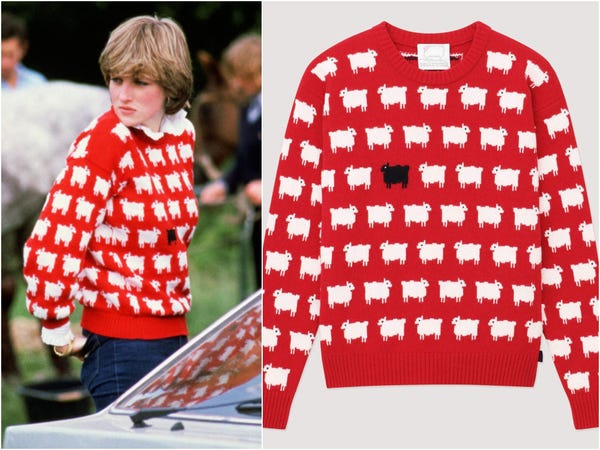 Rowing Blazers has launched its first women's collection, and it's Princess Diana themed.

The New York City fashion brand has partnered with some of the princess' favorite designers to bring back her most iconic looks, including her "I'm a Luxury" sweater and her iconic sheep print sweater.

The brand collaborated with Warm and Wonderful — the designer behind the sheep sweater — to create an exact replica of the original item.

Diana famously wore the sweater while watching a polo match in Windsor with Sarah Ferguson in 1983.

"Diana was the first member of the royal family that we can remember who had any interest in fashion at all," the original designers Sally Muir and Joanna Osborne told People.

"She had a much more adventurous and youthful style than what we were used to in our royalty, and she took an obvious delight in clothes and wore them with terrific style."

They added: "It's a delight for us to see a new generation enjoying something we made many years ago and adapting it to a new fashion era."

Rowing Blazers also collaborated with Gyles and George, who created the "I'm a Luxury" sweater that Diana was pictured wearing during the '90s.

Like the sheep print design, this is the first time the sweater has been re-made by the original designers.

"Both of these sweater designs have been copied or referenced by others over the years (sometimes without crediting or acknowledging the original designers). But collaborating with the original designers is exactly what makes this so special to me," Rowing Blazers creative director Jack Carlson said of the new collection on the official website.