The latest trailer for the second part of the Duke and Duchess of Sussex‘s Netflix docuseries was released on Monday, and it contained some extraordinary revelations, as well as previously unseen photographs.

The next three episodes will drop on Thursday 15 December, and will explore Prince Harry and Meghan’s departure from royal life and their relationship with the press.

While an image of Buckingham Palace is shown, Harry adds: “They were happy to lie to protect my brother (William).

“They were never willing to tell the truth to protect us.”

It is unclear who the Duke is referring to as “they”.

In the 90-second clip, Harry is heard saying: “I wonder what would’ve happened to us had we not got out when we did.”

Meghan adds: “Our security was being pulled. Everyone in the world knew where we were.”

The Duke also can be heard saying: “I said, ‘We need to get out of here’.”

Meghan and Harry seen on ‘Freedom Flight’ to the US

In a self-shot video, Harry can be seen smiling on board a plane, as he says: “We are on the freedom flight.” 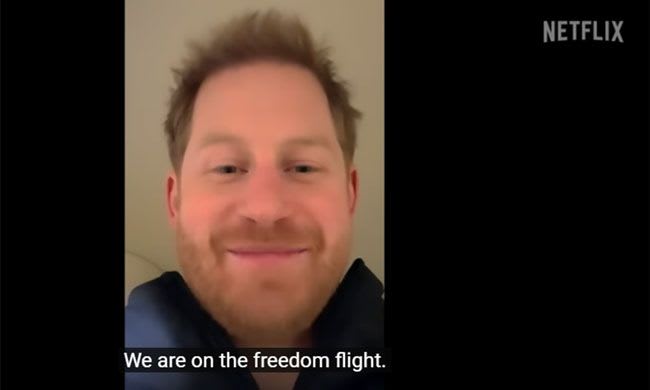 It’s not clear when the footage was taken, but the Sussexes carried out their last royal engagements in March 2020, and then moved to California. They bought their first family home in Montecito in July 2020.

Harry and Meghan’s daughter, who turned one in June, is rarely seen in public, but the couple have included sweet footage of Lilibet taking her first steps in their garden.

An insight into their new life in California

Snapshots and home video footage of Harry and Meghan’s new life in the US are flashed up on the screen, as Meghan says: “It gave us a chance to create that home we always wanted.”

Harry adds: “I’ve always felt as though this was a fight worth fighting for.”