But not for former Olympic swimmer Sharron Davies. She has been getting a good few lengths in during lockdown – on dry land over her kitchen worktop.

The 57-year-old mother of three amazed and amused her 60,000 followers on Twitter by posting a video of herself in action. 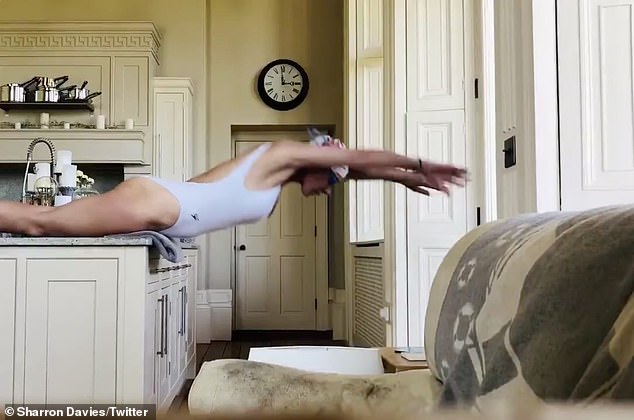 Former Olympic swimmer Sharron Davies, pictured, has been amusing her Twitter followers by doing ‘lengths’ over her kitchen worktop

Wearing a swimsuit, goggles and swim cap – and, thanks to her supreme fitness, staying remarkably horizontal – she practiced a variety of styles including front crawl, butterfly and breast stroke.

When fans questioned if someone was holding her feet, Ms Davies, who won a silver at the 1980 Olympics and two gold medals at the 1978 Commonwealth Games, explained that her 13-year-old son Finley was hanging on to her ankles ‘for dear life’.

One Twitter user commented ‘with tears of joy: ‘I was just willing someone to walk on screen and Chuck a bucket of water – proper 3D effects during lockdown.’

Ms Davies, who competed for Britain at the 1976 Olympics aged 13 and also went on to add multiple Commonwealth and European medals before retiring in 1994, replied: ‘I said to Finley we needed four peeps – 1 to hold feet, 1 to film, 1 to chuck water but we only had us 2 sadly.’

Another of her followers replied: ‘Just as well. Having to mop the kitchen floor would have ruined the afternoon.’

Ms Davies, who said she was at her home in Bath, was also asked if the goggles and cap were necessary. She replied: ‘Virtual swimming… of course!’ 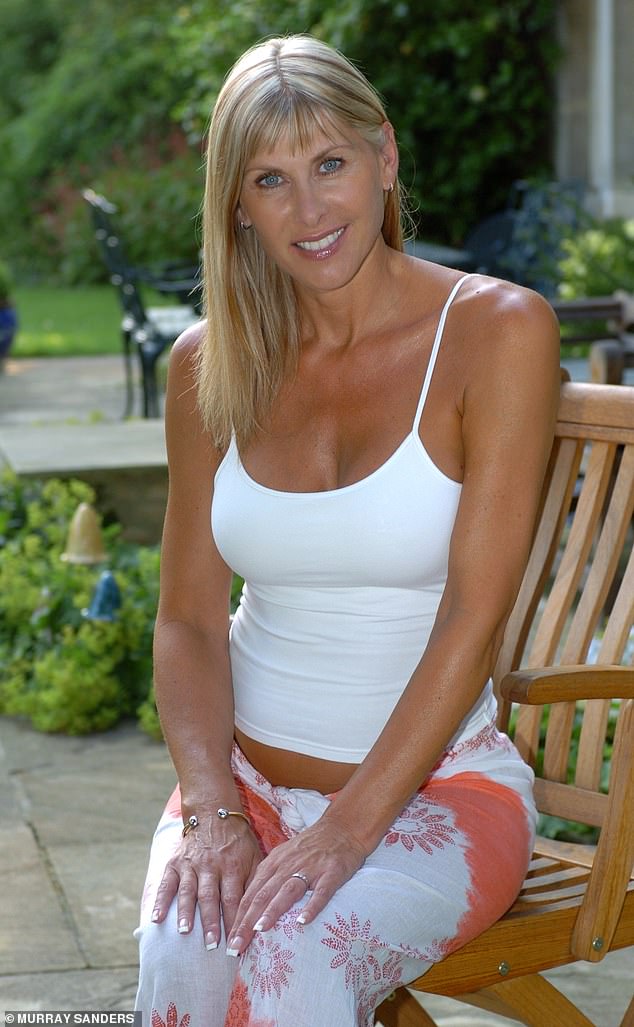 Ms Davies, pictured, won a silver at the 1980 Olympics and two gold medals at the 1978 Commonwealth Games

Others admired the ‘immense core strength’ and tummy muscles she must have to perform the kitchen worktop workout.

Former Olympic athlete Marilyn Okoro, who won a bronze medal at the 2008 Beijing Games as part of the 4 x 400m relay team, said: ‘Amazing!! Not sure what I’m in awe of most – your back strength or your kitchen.’

Ms Davies encouraged her followers that ‘all exercise/mobility is good’ – and her indoor swimming post also inspired others to share photos and videos of themselves performing their own aquatic workouts in paddling pools in their back gardens.

Singer Alison Moyet contributed to the fun and the discussion as she revealed: ‘Lay a towel out on a chair outside before breakfast and then visit it at 3 in the afternoon in me bra and pants.’

It comes after Russian swimmer Yuliya Efimova, 28, showed off a similar at-home workout on Instagram earlier this week.

The three-time Olympic medalist started off her workout with breaststroke, which is her specialism.

She then went on to train butterfly stroke, backstroke and front crawl.

At the end of the clip after training the four strokes her body tired and she fell down to the floor.