Peter Kay, 46, has recreated his iconic music video to Tony Christie’s hit (Is This The Way To) Amarillo for Comic Relief And Children In Need’s upcoming Big Night In. The comedian shared various clips of fans, from nurses to shop workers, marching to the song on his Twitter today, as he thanked them for getting involved.

In view of his 763,000 followers, he wrote: “I wanted to say a huge heartfelt thanks to everybody who’s took the time to film themselves marching to Amarillo.

Earlier this month, Peter encouraged fans to get involved with the recreation of the dance for BBC’s upcoming show Big Night In.

A post read: “Peter is recreating his iconic Comic Relief music video to Tony Christie’s smash hit, (Is This The Way To) Amarillo and this time he wants to include you! #BigNightInAmarillo.”

The Car Share star has since been inundated with thousands of videos from fans.

One video shows staff members at an M&S store dancing to the hit song, while another shows train workers and police officers joyfully recreating his moves.

Peter’s recreation will feature on the BBC show, his first television appearance in two years.

The show will be packed with entertainment in a bid to raise money for local UK charities and projects who provide vital emergency support during the coronavirus crisis.

Lenny Henry, one of the show’s hosts, confirmed Peter’s return to the show in a recent interview on The One Show. 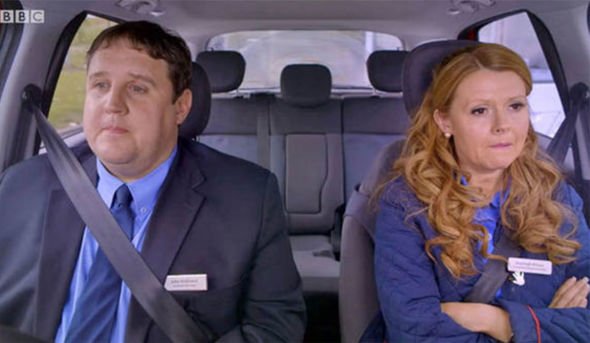 A BBC source also told The Mirror: “We are delighted to get Peter involved as we know how many millions of fans he has.

“Peter is always keen to help when charities are involved and we can’t wait to see what he is lining up for the show.

“Fans will love seeing him back on TV.”

The much loved comedian was last seen on screens in the comedy Car Share back in May 2018.

The trio put the episode together in a bid to bring a smile to fans faces amid the coronavirus pandemic.

While many fans praised the episode, others slammed the show for making a joke about breastfeeding.

“How do you know he was three?” John asked, to which his co-star said: “He had balloons.”

He continued: “Is that what you call them? Breastfeeding at three?

“Swear down. Hanging off the t** with his teeth in Timbalands,” she continued to say.

John replied, telling listeners there is a “time and a place” for the moment.

“I am surprised his mum wasn’t in tears with a three-year-old gnawing at her, they have proper teeth at that age, she must have been in agony.

“They say breast is best but you have got to draw the line somewhere,” he added.

Fans took to Twitter to express their anger about the breastfeeding reference.

Another wrote: “@peterkay_co_uk @Sianygibby I usually absolutely love car share but really sad to hear the mocking of breastfeeding.”