Monica Lewinsky is an executive producer of ‘Impeachment: American Crime Story’, and so she had a big say in what was show in the series revisiting her infamous affair with President Bill Clinton.

When viewers tune into Impeachment: American Crime Story on FX on Sept. 7, they’ll be reminded of the infamous affair that took place in the mid 1990s between 22-year-old White House intern Monica Lewinsky and President Bill Clinton. The highly-anticipated series will revisit that scandal, which resulted in President Clinton’s impeachment. Monica, now 48, endured brutal bullying after the affair was exposed, but has decided to share her side of the story as an executive producer on Impeachment. And in a recent interview with The Hollywood Reporter, Monica revealed that she insisted the show’s producers include a scene that will feature Monica, played by Beanie Feldstein, flashing a sliver of her thong to President Clinton, played by Clive Owen. 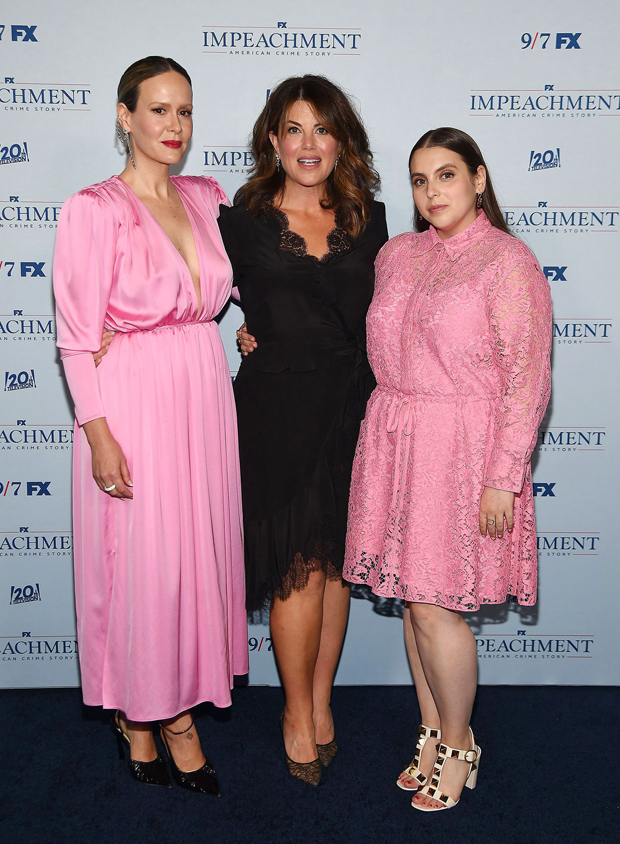 “Listen, I would’ve loved to have been really selfish and said, ‘That’s great that you guys think we don’t have to show that, fantastic,’ but I’m incredibly experienced in understanding how people see this story,” she told THR. Monica also explained to the outlet that the thong-flashing moment — which was featured in the Starr Report, a roundup of allegations against President Clinton that caused him to be impeached — was a vital part of story, and thus she felt that she’d be blamed if she omitted it from the limited series. “So, ultimately, I felt two things: One was that I shouldn’t get a pass because I’m a producer; and two, that it was unfair to the team and to the project because it would leave everybody vulnerable,” Monica said.

However, Monica was not fully involved in creating every scene that fans will see on the show. As she explained to THR, Monica took a back seat in her leadership for the intimate moments between President Clinton and Hilary Clinton, the latter of whom is played by Edie Falco. That decision, Monica said, was for “myriad, obvious reasons.”

Impeachment features a star-studded cast that also includes Sarah Paulson as Linda Tripp, Annaleigh Ashford as Paula Jones, Betty Gilpin as Ann Coulter, Margo Martindale as Lucianne Goldberg, and Billy Eichner as Matt Drudge. Ryan Murphy is the creator and one of the lead executive producers of Impeachment, which is the third installation of the American Crime Story anthology, following The People v. O.J. Simpson and The Asssination of Gianni Versace.

In a previous interview with Variety, Ryan opened up about how involved Monica was in bringing her story to television alongside him. “She’s involved with every script, gives a lot of insights and thoughts,” Ryan said. “The great thing about the story that we’re telling is it’s Monica’s story, which I think needs to be told.” Impeachment: American Crime Story will premiere September 7 on FX.