Lucy Alexander, 49, revealed her teenage daughter Kitty Rose will encounter some “tough times” ahead as she carries out drama school auditions via Skype. As the coronavirus pandemic has forced the UK into lockdown, life as we know it has significantly changed.

Social distancing is being enforced by police and we’re only allowed out for the essentials.

It’s caused schools and universities to close, with most courses publishing online classes for their students.

But in the acting world it doesn’t stop, as drama school auditions are still taking place – but rather than face-to-face interviews, they’re all done through webcam sessions instead so as to adhere to the latest government advice.

Taking to Twitter, Lucy shared that these tough times students are facing would personally affect one of her family members.

“Feel for the teenage daughter today- she’s doing full on auditions and monologues to her laptop for drama school,” she wrote to her 35,400 followers. 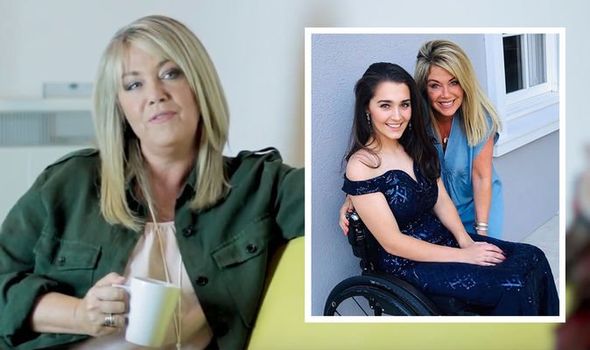 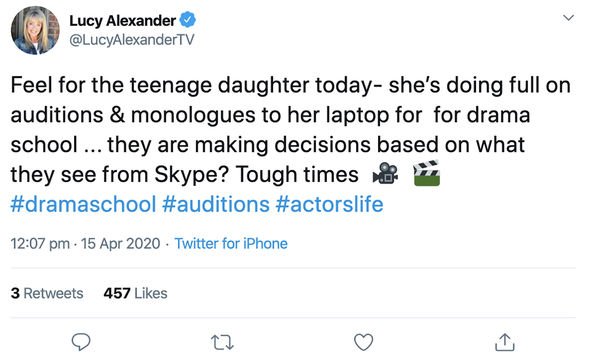 “They are making decisions based on what they see from Skype? Tough times #dramaschool #auditions #actorslife.”

Fans of the presenter were quick to post messages of support for Kitty Rose, wishing her “all the luck in the world”.

“That must be tough. Good luck to her and I hope she gets in,” one fan sent their well wishes.

A second had the same experience: “Good luck to her! My daughter had to do the same to complete her musical theatre course. Shows they’re versatile though.”

“Incredible that she can still audition, fingers crossed,” a third applauded her daughter’s new venture. 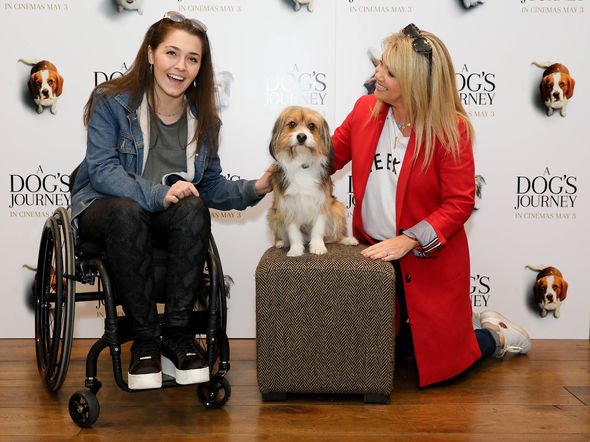 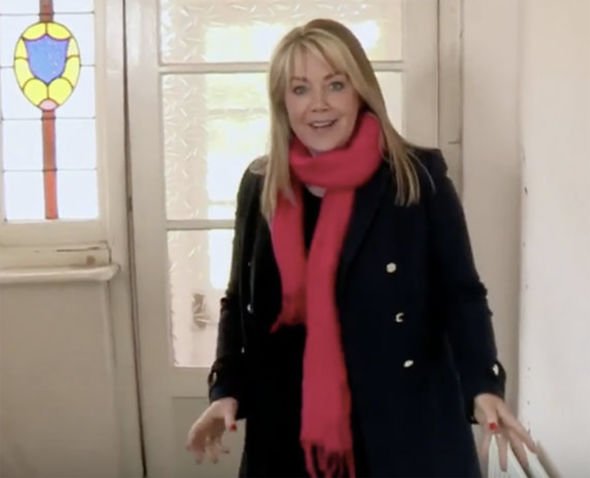 And after all this is over, Lucy might embark on another venture of her own and return to Homes Under The Hammer.

The former BBC presenter told the PA news agency that she had been inundated with fans asking her to make a comeback to the show and dropped a huge hint that someday she may do just that.

“Everybody asks me: ‘Am I going to go back?’ But I’m still on it!” she giggled, as Amazon Prime streaming service are broadcasting classic episodes.

“Really [they] are showing every episode of Homes Under The Hammer every day, so I’m still on the screen and I haven’t done it in about five years – but I’m on it constantly.”

The mother-of-two said it “feels like yesterday” she and current host Martin Roberts were hosting the program and that the pair still meet for drinks and a catch-up every now and then.

“It was a huge, huge, huge part of my life that I loved so much and still love and never say never,” she hinted.

It seems there’s a lot of hopeful Lucy fans out there – maybe the BBC show will give the people what they want and a reconciliation will be on the cards after all?

Lucy presented the property renovation show from 2003 to 2016 alongside Martin and was joined later by Dion Dublin in 2015.

She decided to leave the show to pursue other opportunities, and now hosts The Customer Is Always Right, in which entrepreneurs face a panel of opinionated consumers and YouTubers.

She previously told Express.co.uk that the decision to leave the BBC One show “wasn’t taken lightly.

“I got offered lots of other jobs on Channel 4 and I literally have had a crazy year after leaving,” she admitted.

“I moved on and I did four different TV shows for Channel 4. It was just a time in my life that I was really ready to do that.”

The Customer Is Always Right returns to BBC One on April 20.

Homes Under The Hammer airs weekdays on BBC at 10am.