Kylie Jenner and her daughter, Stormi, have been spending plenty of time together these days. The one silver lining to this quarantine for Jenner is that she hasn’t been working as much, which means she can spend even more time at home with her little girl. And now, Stormi has the cutest new nickname for her mother. 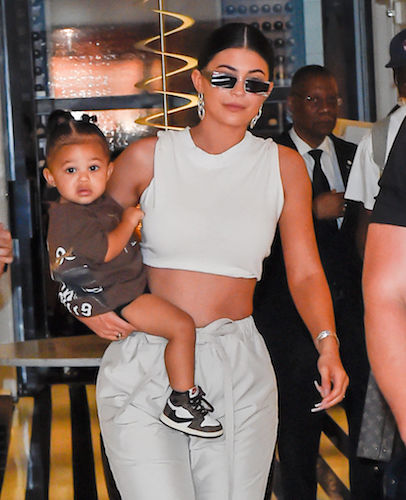 Kylie Jenner and Stormi have had plenty of downtime together

When the quarantine first started, Jenner was excited tohave even more quality time withher daughter. Since Jenner runs Kylie Cosmetics and Kylie Skin, she’s busyall the time. She does bring Stormi to work with her, though she probablydoesn’t hang out with her too much while she’s doing business.

Jenner posted to her Instagram story a couple weeks ago that she and Stormi had been watching movies every day. She’s also posted photos and videos by her pool, and though her quarantine situation is definitely a bit easier than most people’s (Jenner lives in a $12 million mansion), she’s still trying to make the best of being stuck at home like the rest of us.

Stormi was the best thing to ever happen to Jenner. Althoughshe and rapper Travis Scott had only been dating for a few months before theylearned they were expecting, it’s clear that Stormi coming into their lives changedboth of them for the better.

this pic makes me happy

Jenner always shows off her daughter on social media, and fans love to see it. Stormi is the most stylish kid around, sporting Birkin and Louis Vuitton bags like they’re nothing. Jenner often posts funny videos of her daughter to Instagram too, such as when she demanded her mom play “daddy’s” music.

Jenner didn’t provide any kind of explanation for how the nickname came up, but it sounds like a variation of “silly goose.” Jenner might have called Stormi a “silly goose” for some reason, and Stormi then played off the name and created a new nickname for her mom. Jenner always said that Stormi was quite smart.

Jenner has also been showing off her cooking skills during quarantine

Besides spending time with her daughter, Jenner has also beenshowing off her cooking skills in quarantine. She’s tried plenty of new meals, includingbanana pancakes, lemon cake, and avocado toast with honey.

All of us are dealing with quarantine in our own way, butJenner seems to be making the most of it. She’s also encouraged all of her fansto stay home amidst the pandemic, and she and her sisters haven’t seen eachother in weeks. It’s good to know that even the most famous celebrities don’tthink they’re above staying home in a crisis.