There’s been a big question among the MCU’s fanbase ever since Avengers: Endgame hit theaters about who could possibly be the next Thanos—a major villain teased over several projects before eventually reaching an epic showdown. Some thought that might be Mephisto, the Marvel Comics version of the Devil. Others have questioned if maybe it’s time for the MCU to bring in its own version of Norman Osborn, the Spider-Man arch-nemesis played most famously by Willem Dafoe in Sam Raimi’s films. But one big villain we know for sure is coming—the time-traveling Kang the Conqueror—was just introduced in the first episode of Disney+’s Loki, without so much as even his name being uttered.

In a sequence narrator by a talking clock named Miss Minutes (prolific voice actor Tara Strong), Loki (and the viewers) learn all about the Time Variance Authority’s whole deal, and, in particular, the three “Timekeepers.” As the story goes, a long, long time ago, there was a battle of timelines, a war within the multiverse that nearly resulted in the end of anything resembling life. That was, until three “Timekeepers” came into prominence, reorganizing the messiness of the multiverse into one “sacred timeline.”

One of those three Timekeepers, for anyone who knows what to look for, is clearly Kang the Conqueror. Kang is a longtime Marvel Comics villain, who first appeared (as Kang, he previously went by the name Rama-Tut) in Avengers #8 back in 1964. Kang is known for his time-traveling abilities—which makes him a perfect fit for this moment in Loki, and helps to clearly confirm that it is, in fact, him.

Kang’s appearance in the MCU is no surprise. Jonathan Majors has already been officially cast as the character, and is scheduled to make his official debut in 2023’s Ant-Man and the Wasp: Quantumania. But if you look at the Timekeepers—the one in the center is clearly Kang, and the animated face even looks a bit like Majors, as opposed to one of the many artist renderings from his various Marvel Comic depictions. 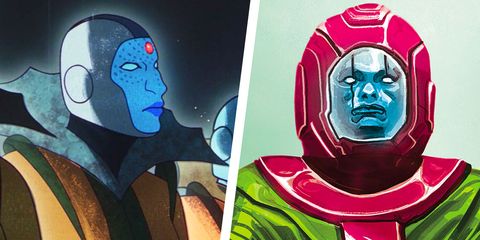 The Miss Minutes video goes on to talk about “Variants,” (what Loki is; basically, anyone who does something that wasn’t supposed to happen, according to the all-knowing sacred timeline that’s been set in place) and “Nexus events,” (which are what an event is called when someone breaks off the path that they’re supposed to be on).

If the latter sounds familiar, it’s because there was already a fake commercial in WandaVision teasing Nexus, which did, in a way, confirm this moment was coming. In the Marvel Comics, Wanda Maximoff/Scarlet Witch is one of the few “Nexus Beings,” meaning she can travel within alternate dimensions at minimal damage to herself; Kang is another Nexus being. It feels clear that MCU is prepping everyone for some major multiverse happenings, with Nexus beings and Nexus events at the center.

The animated version of Kang was consistently at the center of the three Timekeepers each time he was shown on screen. And he later appeared again, in a sculpture in the background of Loki’s TVA hearing. Once again, Kang was the center timekeeper.

It’s intriguing to wonder where things might go from here, since it is so definitively, clearly, Kang the Conqueror. The character of Kang in the history of Marvel Comics is almost always a master physicist, traveling through times and creating alternate versions of himself. Could Kang perhaps be a rogue timekeeper? Could he be simply a bad actor who, similarly to what we presume Loki will do, bounced through time and found himself in a position of extreme power?

Things could legitimately go in either direction. It’s possible that Kang will be referenced and even appear before Loki is over. Majors casting as Kang was first announced last September, but he wasn’t officially revealed as Kang until December, which may not have given enough time to work any sort of small appearance into the show. That would make this brief Kang cameo more similar to the first appearance of Thanos, during the Avengers (2012) end credits; remember, at that time Josh Brolin hadn’t even been cast in the role.

Make no mistake, though: this is the first appearance of MCU Kang. And you’ll be seeing a lot more of him in the future.