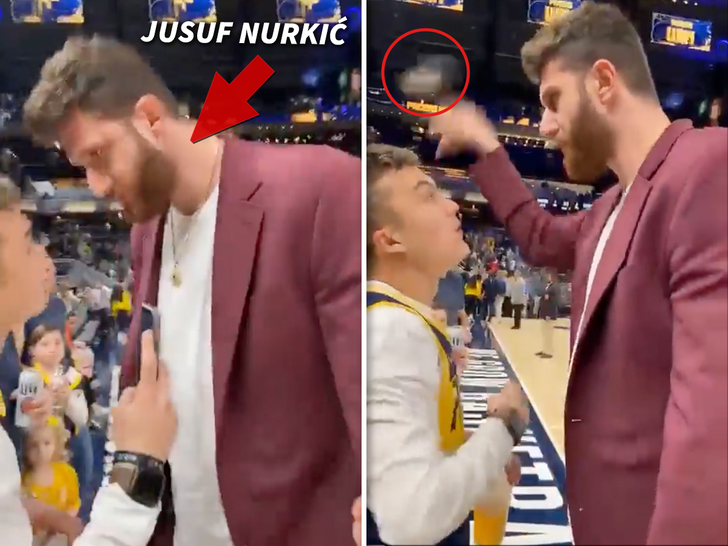 Jusuf Nurkić didn’t play a single minute Sunday night, but the Blazers big man got some action after the game … walking over to a heckling Pacers fan and tossing his phone.

The incident went down following the Blazers’ 129-98 blowout loss to Indiana … when Nurkić apparently heard a fan say something he didn’t like, confronted him with an intimidating stare-down, and chucked his cell.

The fan was completely shocked … saying, “Why’d you throw my phone?”

Security staff intervened by stepping in between Jusuf and the fan … and the Portland center ended up walking away before things escalated further.

It’s unclear what exactly was said that led up to the altercation … but it’s clear whatever words were exchanged didn’t sit well with the Bosnian hooper.

Nurkić — who’s sidelined at the moment due to plantar fasciitis — wasn’t required to talk to the media after the game … so details surrounding what happened are minimal.

Nurkic’s showdown with the fan is an ongoing theme this season — NBA players have been clearly fed up with the hecklers “taking it too far” … prompting the ballers to take matters into their own hands.

Guys like LeBron James and Carmelo Anthony have had fans tossed from the arena … and most recently, their teammate Russell Westbrook confronted a fan before a game for calling him “Westbrick.”

On top of that, the NBA hit Kevin Durant‘s pockets for cussing at a fan last week, so it wouldn’t be shocking if Nurkić was hit with a fine, too.