Gerda Weissmann Klein, who as a teen survived the Holocaust before becoming an author, activist, Presidential Medal of Freedom recipient and subject of a 1995 Oscar-and-Emmy winning film, died yesterday according to that film’s director, Kary Antholis. She was 97.

Born in 1924, Weissmann Klein was sent to Nazi forced-labor camps after the Germans occupied her native Poland. Shuffled through three different camps, she almost died from overwork. As Allied troops advanced, Weissmann Klein was one of 4,000 women sent on a forced death march away from liberation. The group marched through Poland, Germany and what is now the Czech Republic. While she survived the war, both of her parents and her brother died during the Holocaust.

Weissmann Klein was eventually liberated by American forces. She married Kurt Klein, a soldier, and emigrated to the United States. They had three children.

Weissmann Klein wrote an autobiography, All But My Life, which in 1995 was made into a documentary short by Antholis, who produced and directed for HBO. The 40-minute film, titled One Survivor Remembers, won both the Emmy for Outstanding Informational Special and the Oscar — for Best Documentary (Short Subject). 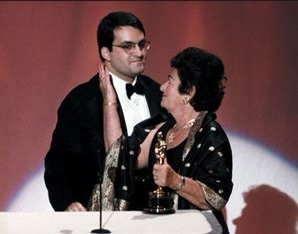 Antholis brought Weissmann Klein up on stage to accept with him. The soft-spoken survivor almost didn’t get a chance to speak as, after the director said his “thanks,” the orchestra seemed to begin playing them off. But Weissmann Klein stepped to the mic, and a hush fell over the room. Her short speech is regarded by many as one of the most memorable ever given at the Academy Awards.

Here it is, in its entirety:

I have been in a place for six incredible years where winning meant a crust of bread and to live another day. Since the blessed day of my liberation I have asked the question, “Why am I here?”

I am no better. In my mind’s eye I see those years and days and those who never lived to see the magic of a boring evening at home.

On their behalf I wish to thank you for honoring their memory, and you cannot do it in any better way than when you return to your homes tonight to realize that each of you who know the joy of freedom are winners.

You can watch her Oscar speech below.

One Survivor Remembers was later added to the National Film Registry. In 2005, the film was made available to educators as a part of the Southern Poverty Law Center’s Teaching Tolerance program. It became one of the program’s most popular offerings and was viewed by tens of millions of students, according to Antholis.

In a piece he wrote as part of the film’s indiction into the National Film Registry, the director related Weissmann Klein’s story to horrific current events, a message which still resonates today.

“When we made the film, the genocidal wars in Bosnia and Rwanda raged,” the piece reads. “Our hope was that this film would communicate to future generations the tragic consequences of intolerance, in a way that statistics and the dehumanizing footage of genocide cannot.”

In 2008, Weissmann Klein her oldest granddaughter, Alysa Cooper, founded a national nonprofit organization to educate students on the rights and responsibilities of citizenship. It is called Citizenship Counts and its overarching goal is to “inspire pride in America.” The non profit’s work continues to this day.

In 1997, President Bill Clinton appointed Weissmann Klein to the United States Holocaust Memorial Museum’s Governing Council. She was also selected to be the keynote speaker at the United Nations’ first annual International Holocaust Remembrance Day in 2006.

In 2011, Barack Obama chose Weissmann Klein to receive the nation’s highest civilian honor, the Presidential Medal of Freedom. Obama said at the presentation ceremony that “she has taught the world that it is often in our most hopeless moments that we discover the extent of our strength and the depth of our love.”

Weissmann Klein said that day in a statement, “I pray you never stand at any crossroads in your own lives, but if you do, if the darkness seems so total, if you think there is no way out, remember, never ever give up.”