First lady Jill Biden and Duchess Kate of Cambridge met for the first time Friday to talk about a topic about which they are both passionate – education – and during the visit, the duchess fielded a question about her new baby niece and expressed her well-wishes.

While their discussion focused primarily on early childhood education, a pool reporter seized the moment to ask Kate whether she had met her new niece, Lilibet “Lili” Diana,” new daughter of Duchess Meghan and Prince Harry, who is a friend of Jill Biden.

“I wish her all the very best. I can’t wait to meet her,” Kate said of the new baby, born an American citizen in Santa Barbara, Calif. on June 4. “We haven’t met her yet. I hope that will be soon.”

Another reporter asked if she had facetimed with the Duke and Duchess of Sussex yet? 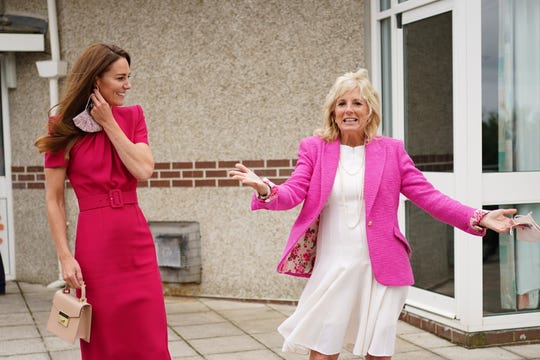 Thus, the royal charm offensive began at the Group of Seven summit in Cornwall, with Biden and the duchess in the lead during a joint engagement at a local school.

Their meeting was just the first public sign of the day that the British crown and government view the first G7 summit of the Biden administration as important enough to deploy its top royals to the scene to spread some royal fairy dust.

Later on Friday, Queen Elizabeth II, Prince Charles and Duchess Camilla of Cornwall, Prince William and Kate – a reigning monarch and two future monarchs – hosted the summiteers, including the Bidens, at a private reception at the Eden Project, an environmental and educational center in Bodelva, Cornwall.

The Queen and other senior members of the Royal Family arrive to host the G7 leaders’ reception at the Eden Project.

The duchess and the first lady – both of whom have made education among their causes – appeared together for a visit to Connor Downs Academy in Hayle, West Cornwall, where President Joe Biden is attending the summit taking place this weekend.

“It’s a huge honor to have you in the United Kingdom,” Kate said, thanking Biden for her interest in early education, a major part of the duchess’ own platform. “I’m very much looking forward to the conversation.” 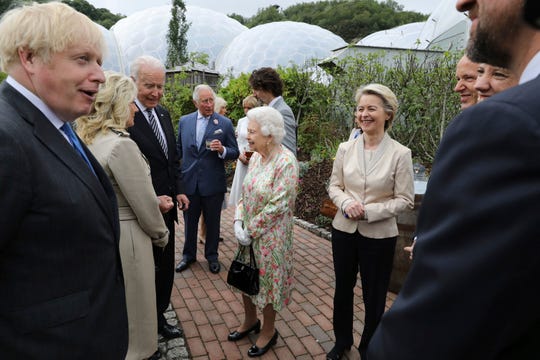 The first lady and the duchess met with young students and then led a roundtable discussion with educators on how early childhood schooling results in positive outcomes for kids.

Like many Americans, Biden was impressed with the good manners of the British kids she met. 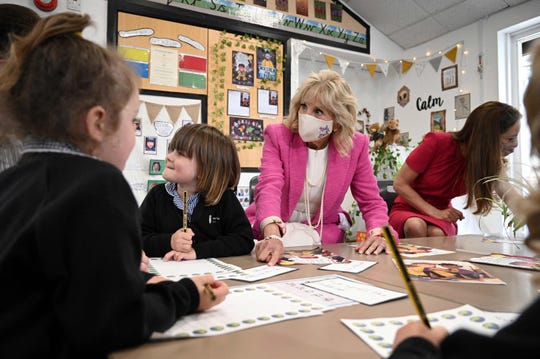 Duchess Kate of Cambridge and first lady Jill Biden chat with children during their visit to Connor Downs Academy in Hayle, Cornwall during the G7 summit on June 11, 2021. (Photo: DANIEL LEAL-OLIVAS, AFP via Getty Images)

“I met some wonderful teachers and principals and most of all the children, who were so inspiring and so well behaved. I couldn’t get over it,” she said, according to the White House pool report.

“And I want to thank the press for covering this because early childhood education is so important to lay the foundation for all of our students. So thank you for having me everybody. It’s a very special place,” Biden said.