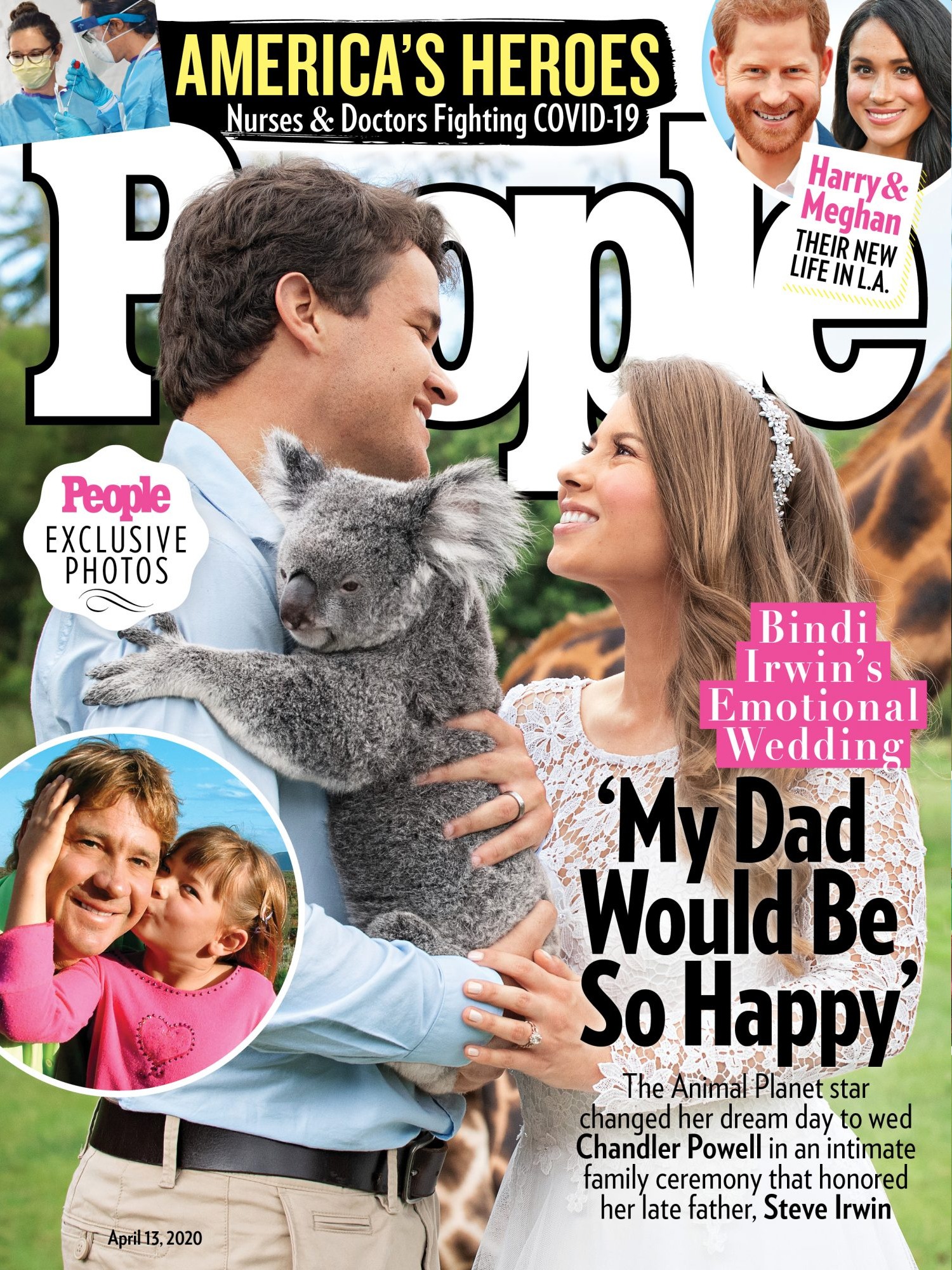 Bindi Irwin got married last week, which feels like five years ago. Bindi is pretty young – she’s 21 years old – and she’s been with her husband Chandler Powell for six years. I feel like Australians are just like that, they fall in love with “high school sweethearts” and get married young and it lasts forever. I’m sure not every Aussie is like that, but it definitely feels like more Aussies are like that than Americans. Anyway, we heard about Bindi’s wedding last week, but she gave the wedding photos to People Magazine for their cover this week. I friggin’ LOVE the wedding photo on the cover. The koala!! Koala Groomsman!!! The fact that a koala is in their wedding photos just makes the whole thing perfect. In fact, Bindi and Chandler basically just had animal “wedding guests” because they chose to go ahead with their wedding as Australia was put on coronavirus lockdown.

From the day Bindi Irwin got engaged to fiancé Chandler Powell last July, the Animal Planet star has been planning her dream wedding at the Australia Zoo. But just four weeks before the daughter of Crocodile Hunter star Steve Irwin and his wife, Terri, was set to walk down the aisle on April 4, the novel coronavirus, COVID-19, began to spread around the globe.

“We had been planning for almost a year,” Bindi tells PEOPLE, “but as soon as this all started happening, we had to look at different options to make sure everyone was safe.” As the pandemic hit country by country, unprecedented shutdowns were put into effect to slow the spread. (With 4,557 cases as of March 31, Australia has now banned most gatherings and limited weddings to five people.) The Irwin family has temporarily closed the Australia Zoo, and Bindi and Powell officially canceled their wedding with just days to go.

“It was a tough decision but absolutely the right one,” says Bindi. “We thought about postponing, because you want to share this day with everyone, but when it boiled down to it, we both just said, ‘Look, we desperately want to get married, and no matter what the future holds, at least we’ll be husband and wife. We can take on the world together,’ ” Bindi shares.

So on March 25, the Crikey! It’s the Irwins star, 21, and Powell, 23, exchanged “I dos” in an intimate ceremony attended by “lots of animals” and just three guests: Bindi’s mom, Terri; her younger brother, Robert; and her late father’s best friend, Wes Mannion. “Even if it wasn’t by-the-book perfect, it was our perfect,” says Bindi, who first met Powell in 2013.

Says Bindi: “These last few days have been amazing reflecting on our whirlwind of a day and also looking forward to the future. My dad would be so happy.”

I’m now at the phase of self-isolation where I am getting a little teary about how Steve Irwin really would have been proud of Bindi. He would have! He would have loved everything about a zoo wedding, and his little girl getting married surrounded by animals. He would have loved that his new son-in-law held a koala groomsman. F–k, this is making me so emotional.

While Bindi and Chandler didn’t have many wedding guests, they… had a camera crew?? The Animal Planet will premiere “Crikey! It’s the Irwins: Bindi’s Wedding special” on April 18 at 8 p.m.

March 25th 2020 ❤️ We held a small ceremony and I married my best friend. There are no words to describe the amount of love and light in my heart right now. We’ve planned this beautiful day for nearly a year and had to change everything, as we didn’t have guests at our wedding. This was a very difficult decision but important to keep everyone safe. We wish all of our friends and family could have been there with us, however it’s lovely that we will be able to share photos and videos. Right now we’re encouraging the world to hold onto hope and love, which will carry us forward during this profound time in history. Today we celebrated life and revelled in every beautiful moment we shared together in our Australia Zoo gardens. Mum helped me get ready, Robert walked me down the aisle, Chandler became my husband and together we lit a candle in Dad’s memory. We shared tears and smiles and love. Thankfully, since we all live at Australia Zoo as a family, we could be there for each other. To everyone reading this – stay safe, social distance and remember LOVE WINS!