Allison Mack has been sentenced to three years in prison after pleading guilty to racketeering charges for her involvement in NXIVM. The former Smallville actress was first arrested in April 2018 after the organization was exposed as a pyramid scheme and cult that forced its female recruits into sexual slavery. She also received a $20,000 fine.

Mack, who was responsible for recruiting women like India Oxenberg and branding them, is the latest high-profile member to be sentenced after Seagram heiress Clare Bronfman was sentenced to nearly seven years in prison and founder Keith Raniere was convicted on racketeering and sex trafficking charges, and sentenced to 120 years in prison.

Allison Mack has been sentenced to 3 years in prison for her role in the Nxivm case. Also a $20,000 fine.

In April 2019, Mack entered her plea to racketeering charges. “I must take full responsibility for my conduct and that is why I am pleading guilty today,” she said in court, adding, “I am and will be a better person as a result of this.”

Since then, Mack has been out on a $5 million bail and under house arrest. During that time she reportedly has been undergoing therapy and working toward a bachelor’s degree at University of California, Berkeley. She also filed for divorce from Battlestar Galactica actress Nicki Clyne, a longtime NXIVM member and vocal defender of Raniere.

Prior to her sentencing, it was reported that the prosecution revealed Mack had “provided substantial assistance to the government” and that they were seeking a sentence “below” the standard range of 14 to 17.5 years. Meanwhile, her lawyers had requested that she spend no time in prison after she as “turned completely around from depravity and trauma to peace, acceptance and remorse.”

As ET has previously reported, Mack was 23 years old when she first joined NXIVM after she became unhappy with her acting career and had hopes of becoming a “great actress again.” Soon, the actress devoted herself to the cult and rose in the ranks within the organization. In addition to her role as master over several members including Oxenberg, Mack also became a face of NXIVM, appearing in promotional videos for the cult. 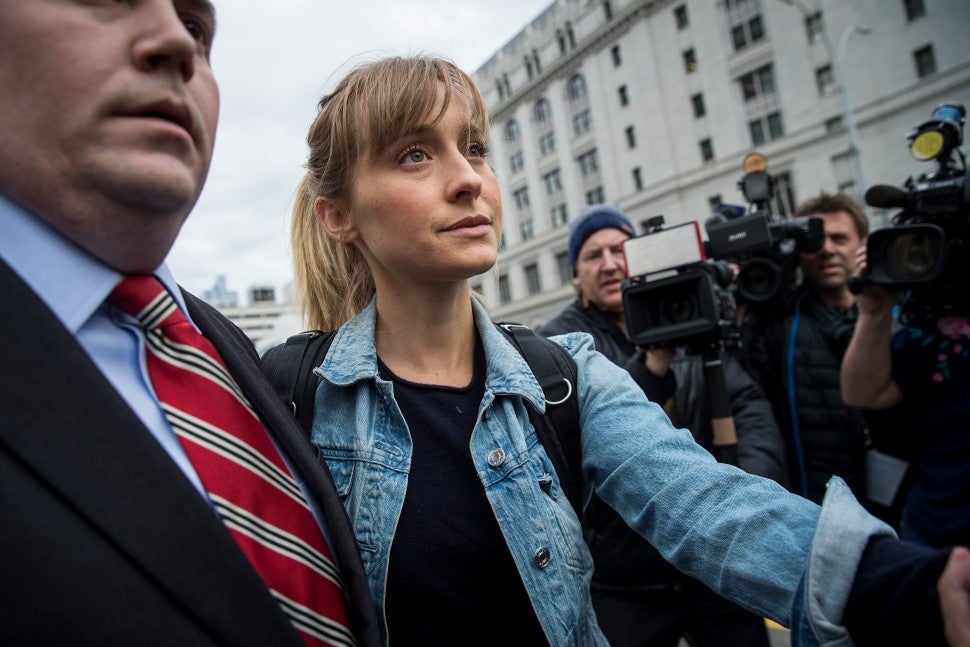 Oxenberg, who escaped NXIVM after seven years spent inside the organization, claims that she was sexually assaulted, forced to lose weight and had to get branded with the founder’s initials under DOS, the secret master-slave system created by Raniere and Mack. “I had to do planks, ice-cold showers, stand in the snow at 3 a.m.,” Oxenberg said in the harrowing docuseries Seduced: Inside the NXIVM Cult, adding at one point that she “had to be 106 pounds.”

She also recalled what it was like to be permanently marked with Raniere’s initials by Mack, revealing that the ceremony “lasted for about 30 minutes.” She also remembered Mack repeating the phrase, “feel the pain, feel the love,” as she was branded.

The Starz docuseries was just one of several projects to depict Mack’s involvement in the cult, including The Vow on HBO and the Lifetime movie Escaping the NXIVM Cult: A Mother’s Fight to Save Her Daughter, which chronicled Oxenberg’s mother’s attempts to free her daughter.