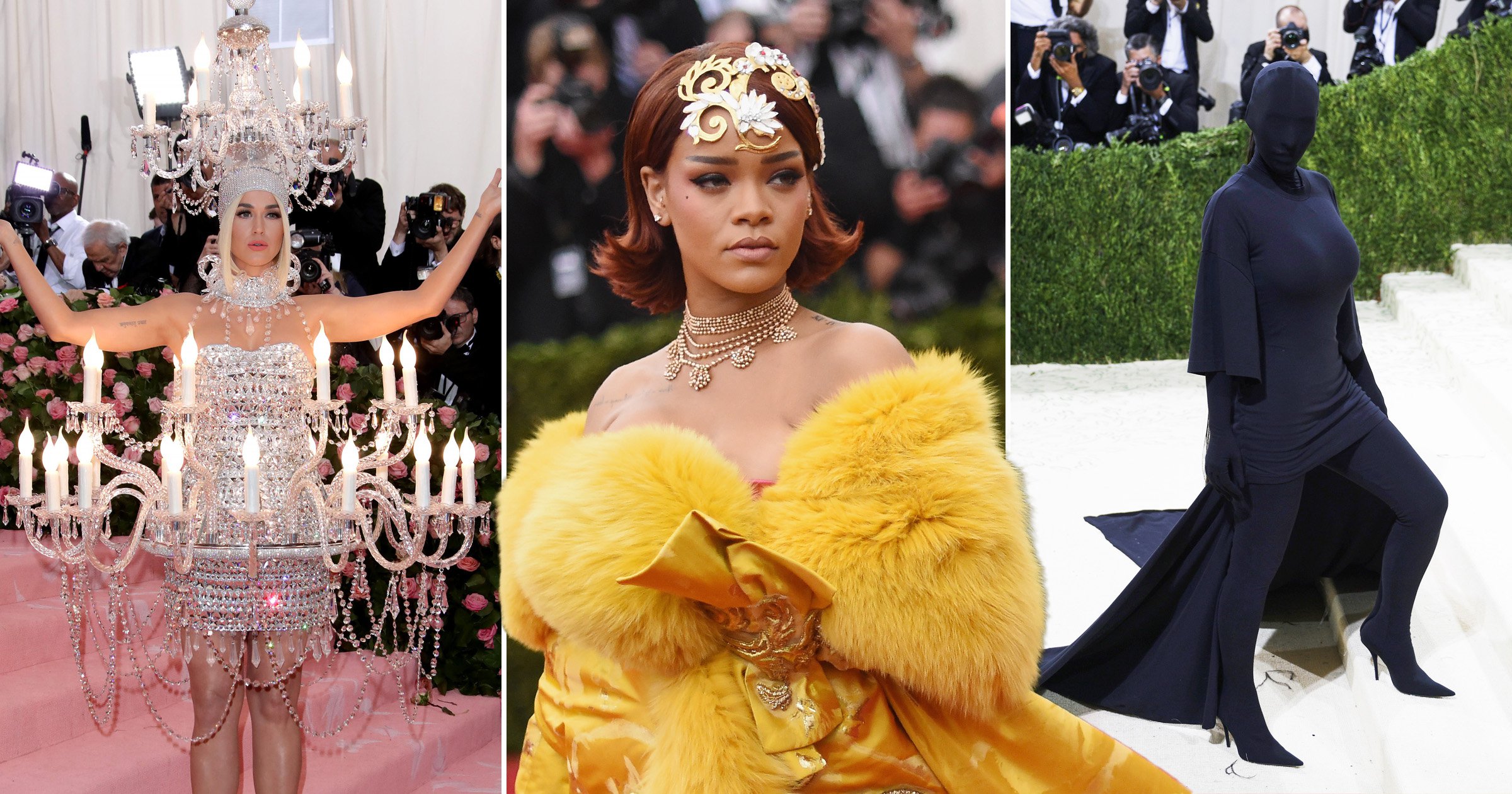 It’s been a year of semi-return to normality as the public eases back into big events and, as it’s now May, that can only mean it’s time for the 2022 Met Gala!

On Monday night, New York will truly bring fashion back into our living rooms once more as the great and glamorous show off bold looks at the annual event, with many looking forward to the unveiling of the guest list and hopeful inclusion of one Kim Kardashian.

While last year brought us ‘In America: A Lexicon of Fashion’, after a year off due to Covid in 2020, 2022 is continuing with part two of the exhibition: ‘In America: An Anthology of Fashion’.

Actors Regina King, husband and wife team Blake Lively and Ryan Reynolds, and composer and performer Lin-Manuel Miranda will serve as the official co-chairs and hosts for 2022.

As always, celebrities have the freedom to interpet the theme as they wish, but this year’s ‘Gilded Glamour’ dress code has requested white tie, which is as formal as you can get.

But until the red carpet opens, we can reminisce on some of the most memorable, daring and drop dead gorgeous looks in Met Gala history.

From camp classics to dresses that took literal years to create, here’s the outfits that we can’t get out of our heads years later.

Rihanna at China: Through The Looking Glass (2015)

If there’s one celeb that sums up the Met Gala, it’s Rihanna.

The Fenty mogul never misses, whether it’s looking like a rose bush in tribute to COMME des GARÇONS‘ Rei Kawakubo, or wearing a papal hat to commit to the Heavenly Bodies theme.

But it was her 2015 look for the China: Through The Looking Glass event that reigns supreme.

As well as being a walking work of art, the look also delivered the memes in abundance, with Rihanna’s train doubling for an omelette and a pizza thanks to Twitter.

Kim has also had many standout looks at the Met Gala – an honourable mention goes to that floral dress and gloves she wore on her first appearance.

However, she reached peak Kardashian fashion at the 2019 Met Gala, when she chose to interpret ‘Camp: Notes on Fashion’ with this jaw-dropping silicone dress from Thierry Mugler.

The nude dress took eight months to make and was covered with dripping crystals to make Kim look like she’d emerged from the ocean.

Underneath the dress, Kim wore a couture corset from Mr Pearl, which left her unable to pee or and with indentations all over her stomach and back.

One from last year’s return to proceedings and musician Grimes came to slay rather than play.

Donning a Dune-inspired Iris Van Herpen look, complete with an actual sword, Grimes made a statement in her etheral silver, white and black gown, made out of liquid silicone and hand-pleated silk.

She also weaved in her pandemic-appropriate face mask to make it fashion, with a silver metallic face covering.

Alonside the dress, which reportedly took 900 hours to fashion, the Canadian carried a small illuminated book and the large sword, which was forged out of a mekted-down Colt AR-15A3 automatc rifle.

Chadwick Boseman at Heavenly Bodies: Fashion and the Catholic Imagination (2018)

Often the attention at the Met Gala stays on the women, but every so often, a man steps up and fits the brief to a tee.

The late Chadwick Boseman showed off his impeccable style at the Heavenly Bodies: Fashion and the Catholic Imagination event, wearing a white cape from Versace, adorned with gold crosses.

By far one of the best male looks we’ve seen at the Met Gala.

Making sure the party was lit – literally – at the 2019 event, Katy arrived dressed as an actual chandelier in a custom look from Moschino.

The crystal embellished dress featured a chandelier that floated around Katy’s waist, plus an intricate headpiece that must have been a nightmare to carry.

Beyonce at China: Through The Looking Glass (2015)

Beyonce was a late arrival to the China: Through The Looking Glass event, but who needs to be on time when you a) are Beyonce and b) look this good?

While the dress wasn’t really on theme, Bey dazzled in a ‘naked dress’ from Givenchy that featured expertly placed green, white and pink crystals embellished on a form-fitting sheer dress.

Beyonce made sure to work her angles like the pro that she is on those red steps.

While the Met Gala may have been ramped up in attendance and star power over the past decade, it’s been known as the jewel in NYC’s social crown since the 70s.

And in 1974, Cher proved she was – and is – the queen of glamour, as she wore an iconic Bob Mackie dress to the event themed Romantic and Glamorous Hollywood Design.

The look – a sheer beaded gown with white feathered sleeves and a matching feathered skirt – became one of the most famous naked dresses of all time, and Cher later wore the dress on the cover of Time magazine.

Alexandria Ocasio-Cortez at In America: A Lexicon of Fashion (2021)

Politician and activist Alexandria caused quite a stir with the bold message she wore for her debut at the 2021 Met Gala.

The Democratic congresswoman attended the fashion extravaganza wearing an off the shoulder white dress from Brooklyn-based designers Brother Vellies, featuring a fishtail silhouette and a tulle hem.

However, what caught the eye most was the slogan emblazoned on the back of the dress in bright red – ‘Tax The Rich’ – with her telling Vogue: ‘We can’t just play along, but we need to break the fourth wall and challenge some of the institutions. While the Met is known for its spectacle, we should have some conversations about it.’

However, AOC wearing the dress to an exclusive event where tickets are sold for at least $30,000 (£21,620) hit a bit of a nerve, with some deeming her presence at the event ‘hypocritical’.

It was certainly the conversation starter she hoped for, though.

Pose star Billy Porter always makes a splash on the red carpet, and he ensured that in 2019 when he was carried into the Met Gala by six shirtless men in a nod to Ancient Egypt.

While that would have been enough to land him on this list, Billy then revealed his Sun God ensemble, custom made by The Blonds, which featured a bejewelled catsuit, a 24-karat gold headpiece, gold leaf Giuseppe Zanotti shoes, jewels from Andreoli, John Hardy and Oscar Heyman, and, most importantly, 10 foot wings.

Lady Gaga was one of the chairs of Camp: Notes on Fashion, so based on that, and the fact she is Lady Gaga, we knew that she would be extra AF.

She didn’t disappoint, as before she’d even gone into the event, Gaga had changed her outfit four times.

Under that was a pink column gown… and under that, came black underwear and fishnets, which Gaga modelled while pushing a Haus of Gaga drinks trolley.

You can’t have a New York fashion event without SJP, and her finest moment came in 2014 at Charles James: Beyond Fashion.

She gave a nod to James’s style in a stunning Oscar de la Renta gown with a black criss-cross design on the train to embody a dress form.

In case you didn’t know who she was wearing, the designer’s name was embroidered on the train in red cursive.

Kim Kardshian at In America: A Lexicon of Fashion (2021)

Okay, we’ll let Kim be our one repeat offender in this list after the hard-to-miss outfit she pulled off at last year’s Met Gala.

Her slightly baffling Balenciaga look saw her covered in black from head to toe, literally, as she wore a black long-sleeved dress with matching leggings, boots, cape and an entire face covering.

The star recently admitted that she ‘didn’t get it’ herself to begin with, but was convinced by the brand’s creative director, Demna Gvasalia.

The risk she took was a big one, with her mother Kris Jenner also revealing that Skims entrepreneur Kim couldn’t actually ‘see or breathe’ in the outfit.

You can wear a pretty dress or stylish suit to any event, but the Met Gala gives celebs a chance to get truly weird.

So we tip our hats to Jared Leto, who attended the 2019 event carrying a replica of his own head.

A callback to Gucci’s very creepy 2018 show where models carried their decapitated heads, Jared’s head rocked the same luscious long hair, and was passed around the other guests throughout the night.

Jared didn’t scrimp on his look, either, wearing a regal red suit from Gucci, draped with jewels.