Rather than wait for any stability to return to the ballet world, Tiler Peck has been dealing with the pandemic by trying unexpected feats.

The principal dancer of the New York City Ballet’s latest assignment involved choreographing, directing and performing in “Dancing Into Forever,” a short film for the bridal house Justin Alexander. The video, which debuts at noon on Thursday, showcases Peck and her dancing partner Roman Mejia’s artistry and the brand’s latest wedding gowns.

Peck connected with Justin Alexander’s designer and chief executive officer Justin Warshaw through her friend Heather Watts, a former principal dancer at the New York City Ballet. Intrigued by the challenge of the project, Peck understood that developing a short video would involve creating a story, a lot of positioning, director skills and using her acting skills in dancing. “During this pandemic, I’ve only been up for putting myself into things that I normally wouldn’t do or have the time for,” Peck said during an interview from Bakersfield, Calif.

After the coronavirus crisis darkened the David H. Koch Theater at Lincoln Center, emptied out dance studios and dancers found themselves marooned at home, Peck started offering ballet classes via Instagram. More than a year later, she has amassed a following that is 262,000 strong — a turnout that surprised her. Having never done an Instagram Live, she said, “It was kind of crazy. I didn’t really know what I was doing. I didn’t really know how to get on or what the numbers meant. I was just doing it for people who were stuck at home and for myself so that we could stay in shape together,” Peck said. “I honestly had no idea that it would turn into what it has and that people would count on it every week. They are so worried about me going back to New York [asking], ‘Are classes going to end?’”

Photos of Vivienne Westwood’s Career From the Fairchild Fashion Archives

Having created special bonds with these people, Peck said some have been taking classes with her for more than a year now. The plan is to keep them going in some capacity, when her work schedule resumes. “I’ve missed time in the studio for sure. But I’ve really used this time to make ballet the most accessible that I can. At first, there were 1,500 people together in class. That would never happen in a physical studio or would I be able to reach so many people around the whole world. That was a huge gift,” Peck said.

Having acted when she was younger on television and in films like “Donnie Darko,” Peck and Mejia worked with a two-person crew for the eight-minute bridal flick. “The most challenging part was probably conveying all the different emotions. That was really important to bring hope and inspiration right now because of what they’re going through. Planning the wedding is difficult in itself. To do it during COVID-19 is just a lot,” she said. “My sister is going through it and I really feel for her.”

With the Justin Alexander team, the aim was to show the ups and downs, but the finale, so to speak, is that you have found your person and you’re marrying them. “While it’s not the same celebration, in the end it really is because you’ve found the person you’re going to spend the rest of your life with.”

Asked if having been married meant that she could bring more to the project, since she had experienced it, Peck said, “I don’t really think so. It was more the music that I was listening to to tell the story. As soon as I hear the music, the emotions tell you what it is. The music is more upbeat — those are the happier moments. Then the music drops and those are the sadder moments.”

Peck married fellow dancer Robert Fairchild in 2014 and the couple separated in 2017. A former principal dancer with the New York City Ballet, the CAA-represented Fairchild has performed on Broadway and in films. Last fall he launched the floral arrangement business Boo-kay.

When shooting the Justin Alexander film in the church, Peck said, “I said to the deacon that I actually don’t remember the order of events.”

Dancing professionally alone is intrinsic to taking people through so many emotions and that turned out to be an advantage. “That’s why we dance. We dance because we love expressing ourselves through movement. I always say it’s a universal language. That’s why I love to dance. I’m able to outpour my emotions in movement,” Peck said. 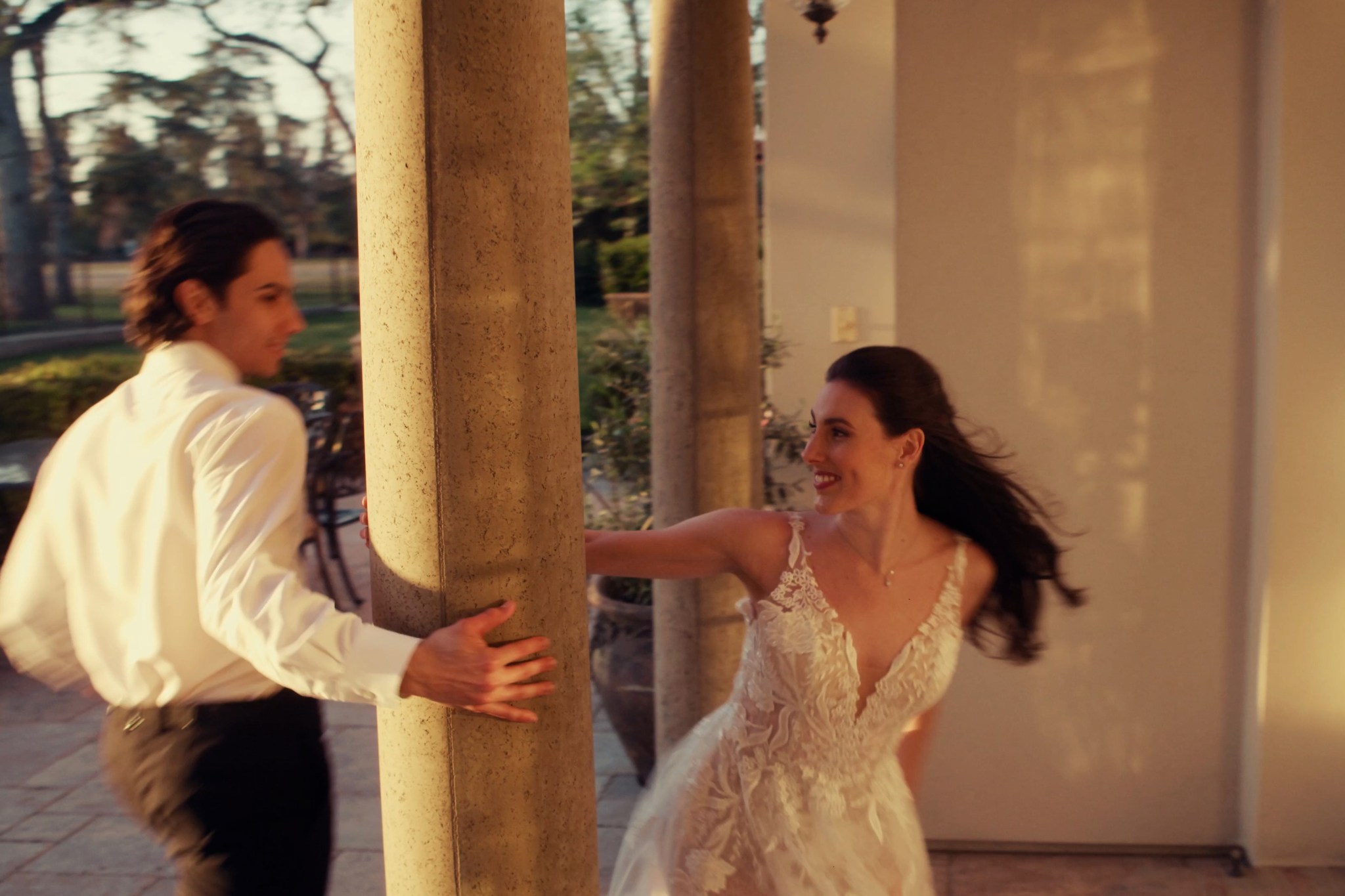 One of the upsides of partnering with a clothing brand like Justin Alexander is for designers to see their gowns with so much movement and being danced in — an anomaly for most companies. After Warshaw saw the video, he said, “Why didn’t we see this before?” Peck said.

After meeting Valentino Garavani through the New York City Ballet’s 2012 fashion gala, Peck said they have become very friendly. Olivier Theyskens and Gilles Mendel are among the other designers she has met through the annual event. “They are all so enthralled by dance. Valentino loved the ballet. It was an amazing thing for him to have us all in his clothes on stage dancing,” Peck said.

She and Garavani in the past vacationed together each August, but they haven’t seen one another in person in more than a year, save for a virtual birthday celebration. The summer sojourn is off, too. “That was always so nice because it was on a boat. So I couldn’t do anything, which was hysterical. This was the perfect place to put me. I have so many ideas constantly going on in my head. If I am on vacation or taking a day off and an idea pops into my head, I will say, ‘Aw, that is such a good idea. Let me just work on that.’ It’s fun for me.”

Turning more serious, Peck said she definitely does take time off. If she has learned anything from injuries it’s that one’s mental health is so connected to the physical. Peck was sidelined by a debilitating neck injury for a good part of 2019.

She returned to Manhattan Tuesday for an upcoming shoot for the New York City Ballet’s spring gala, which will be virtual on May 5. The full company hopes to return for the fall season but that is to be determined, as many events are. Peck will lead a summer intensive from June 14 to 18. “I think everyone is going to be so happy to be back in the studio in person. It’s hard to be motivated. Dance is so difficult. Self-motivation — we all have it — but it gets difficult after a year of doing classes by yourself,” she said, adding that having a teacher in the studio as opposed to Zoom will be a plus as well as being with classmates even if you’re socially distanced.

Having recently achieved “a bucket [list] dream” to work with choreographer William Forsythe on “The Barre” project, Peck said that the shutdown made that possible. “Our schedules are so crazy. We’ve tried for three years to work together and something was always keeping us apart whether it was the flu, an injury or this or that,” she said. “I am so proud of the project. It seems to have inspired a lot of younger dancers to think outside of the box about what ballet is and to try something new.”

As for the biggest misconception of ballet, Peck said when she was younger she didn’t really like it because it was so much more boring than the other styles of dance she did. Not averse to how hard ballet is, Peck noted how it does require the most amount of discipline and technique and is performed to classical music. Other forms enabled her to dance to lyrics and pop songs, which allowed her to feel the emotions more. “I had no idea what ballet could be — like dancing as I do in ‘The Barre Project.’ That feels like getting to do a bunch of styles in one. That’s the same way with New York City Ballet. I get to do all these different styles and [use] different pointe shoes. Sometimes I don’t even have pointe shoes. I’m in heels,” she said.

Unaware of the recent news piece about how some professional ballet dancers are reconsidering their bodies and what the ideal physique should be, Peck addressed other potential outcomes of the pandemic. “This year is definitely going to have a lot of changes. I don’t know what our company is going to look like — meaning I don’t know if everybody is going to come back. I’ve been fortunate to have a dance studio and just the drive to keep myself busy. I know that not all the dancers have,” she said. “…I’m still keeping my same goals and high standards. I can only really focus on my personal best.”

Before signing off on a phone interview, Peck’s publicist mentioned her eight-year-old “danceleisure” line. As someone who wears those things every day, Peck decided to try designing them as opposed to “somebody with amazing ideas, which can also be great,” she said. What started as three leotards has morphed into 100 styles including rompers and leggings. That interest made her think “maybe I am OK at this,” Peck said. Meant to go from the studio to the street, Tiler Peck Designs is sold via Body Wrappers. She also has it on her Instagram so that people can just click it and buy it. Asked if sales have gone up due to the interest in the class, “I think so, people wanted to wear what I was always wearing,” Peck said. “I have a really hard time promoting things because I just don’t like that. I never wanted to speak about them because I didn’t want people to feel like I was pushing them upon them.”

If someone would DM or write to her asking about what she wore, Peck said. “I was more than happy to say, ‘Actually, you can get it. Here’s how to get it.’”