The costumes in Minari, a film by Isaac Chung, include midcentury-style button-downs and slim dresses with straight, conservative lines. These looks from the 1970s and ’80s are part of a trend in present-day South Korea called “newtro” or new retro, which is seen in popular neighborhoods of Seoul like Hongdae and Euljiro; music videos like “Dynamite,” by BTS, and “Woowa,” by Dia; and television shows like “Mr. Sunshine.”

Susanna Song, the costume designer for “Minari,” selected the characters’ outfits by looking through old family photos and watching Korean dramas like “Reply.” Ms. Song, 35, who grew up in California, said her style has been influenced by her heritage and in particular her mother, who emigrated from Korea to Los Angeles in the ’70s.

“My mom had this boat neck top with polka dots that always stuck out to me,” said Ms. Song. “She was always so sophisticated and classy.”

The trend is not limited to fashion, it has been used to describe young people’s interest in trot (Korean popular music from the ’50s,) as well as hip coffee shops with visual cues from ’70s design trends.

Choi Ji-hye, an analyst at Seoul National University’s Consumer Trend Research Institute, said pinpointing what newtro is can be tricky because it can be applied so widely, but said part of its definition is “reinterpreting elements from the past to create something new.” 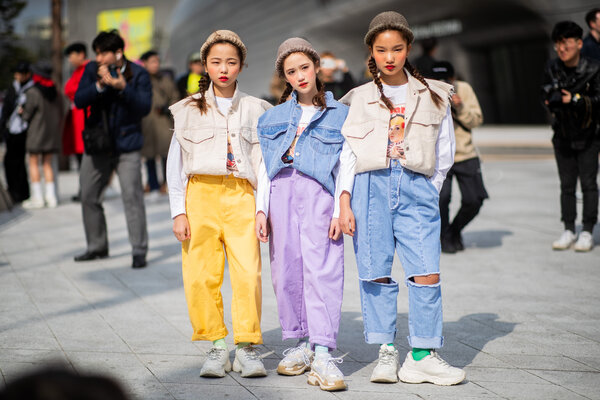 Ms. Choi said that the trend is not just about imitating a specific time period; it is a term normally applied to younger generations looking for inspiration in time periods that they did not live through. Nostalgia is a major factor.

“The South Korean market is characterized by its fascination with the latest, newest item, so it is unusual that consumers, especially those in their teens, 20s and 30s are shifting toward the past,” she said. She traces the younger generation’s nostalgia to an uncertain economy and increasing anxiety about the environment. Opting for vintage pieces instead of new ones is one way of abiding those concerns.

Much of South Korea’s vintage scene is dominated by secondhand clothes from the United States. Not only did American military presence and Hollywood movies exert a strong influence on Korean fashion in the decades after the Korean War, but also many Korean brands were not recognizable until the early ’80s, according to Jeongwook Choi, a professor of textile and clothing design at Kyung Hee University in Korea.

Ms. Choi credited a Korean television series called “Reply,” about a group of friends in the ’80s and ’90s. The three-part drama, one of the most successful shows from 2012 to 2016, is attributed with bringing back clothing from the era — mom jeans, classic American-brand sneakers, oversize sweatshirts.

It influenced Ms. Song, who was not actively following the newtro” trend during her preparations for “Minari.” “I am really excited to hear that Koreans are also adapting to this style,” she said.

Louis Park, 48, a former stylist who runs a vintage-style cafe in Seoul, said he wondered if Jacob, a character in the film played by Steven Yeun, was too stylish. “I looked at Steven Yeun’s character and thought, ‘This is a man who’d just be considered a fashionista today,” he said.

Myong Jung-woo, 37, who opened a vintage shop called Bubu1206 in 2017, said her closet consists of items from the ’70s to the ’90s. She said that newtro is about understanding your parents’ generation and has found that many young women come into her shop looking for dresses that resemble what their mothers wore at their age. “Not only is it a fun way to find your own style, it also helps you bond with your elders,” she said.

Lee Jin-soo, a GQ Korea editor, said her love of Hollywood movies like “E.T.” and “The Cure” resulted in her fondness for vintage American T-shirts. “Much of what’s considered trendy, in terms of newtro fashion, comes from the United States,” she said.

Mr. Park, who has followed Korea’s vintage scene since he was a teenager, said that Korea does not have the culture of passing down household items to future generations. “If you go to a vintage store in Korea, there aren’t that many Korean brands,” he said. “For most of our history, we never saw clothes, particularly old Korean clothes, as having value — we just saw them as used. I hope this new trend means some of that can slowly change.”