Iconic fashion designer Halston has reentered the cultural lexicon this last week thanks to the new Netflix limited series that shines a light on the designer’s tumultuous career and party life.

The show also highlighted many of Halston’s close friends and partners who were influential in his personal and professional life. Most notably, the show covers Halston’s tight bond with singer and actress Liza Minnelli, who has remained a staunch supporter of the designer in the three decades since his death.

Here, WWD breaks down some of Halston’s relationships with figures like Minnelli, Elsa Peretti, Joel Schumacher and others who were depicted in the Netflix series and what they accomplished during their careers. Read on for more.

Eurovision Song Contest: The Most Memorable Moments of All Time

Peretti was known for elevating the allure of sterling silver during her time at Tiffany & Co. and created some of her iconic styles — such as the bean, bone cuff and bottle pendant — that are still sold by the fine jeweler. She expanded her designs to homeware in the early 1980s, designing china, crystal and silver collections.

Her designs earned her several accolades and recognitions during her career. Peretti received the Coty American Fashion Critics’ Award for Jewelry in 1971, the Rhode Island School of Design President’s Fellow Award in 1981 and was named Accessory Designer of the Year by the Council of Fashion Designers of America in 1996.

Peretti continued working with Tiffany & Co. up until her death this March at age 80. In October, she released a jewelry collection inspired by many of her popular archival pieces, including styles featuring the bean pendant and bone cuff. In 2019, Peretti’s designs accounted for 7 percent of Tiffany & Co.’s global net sales. 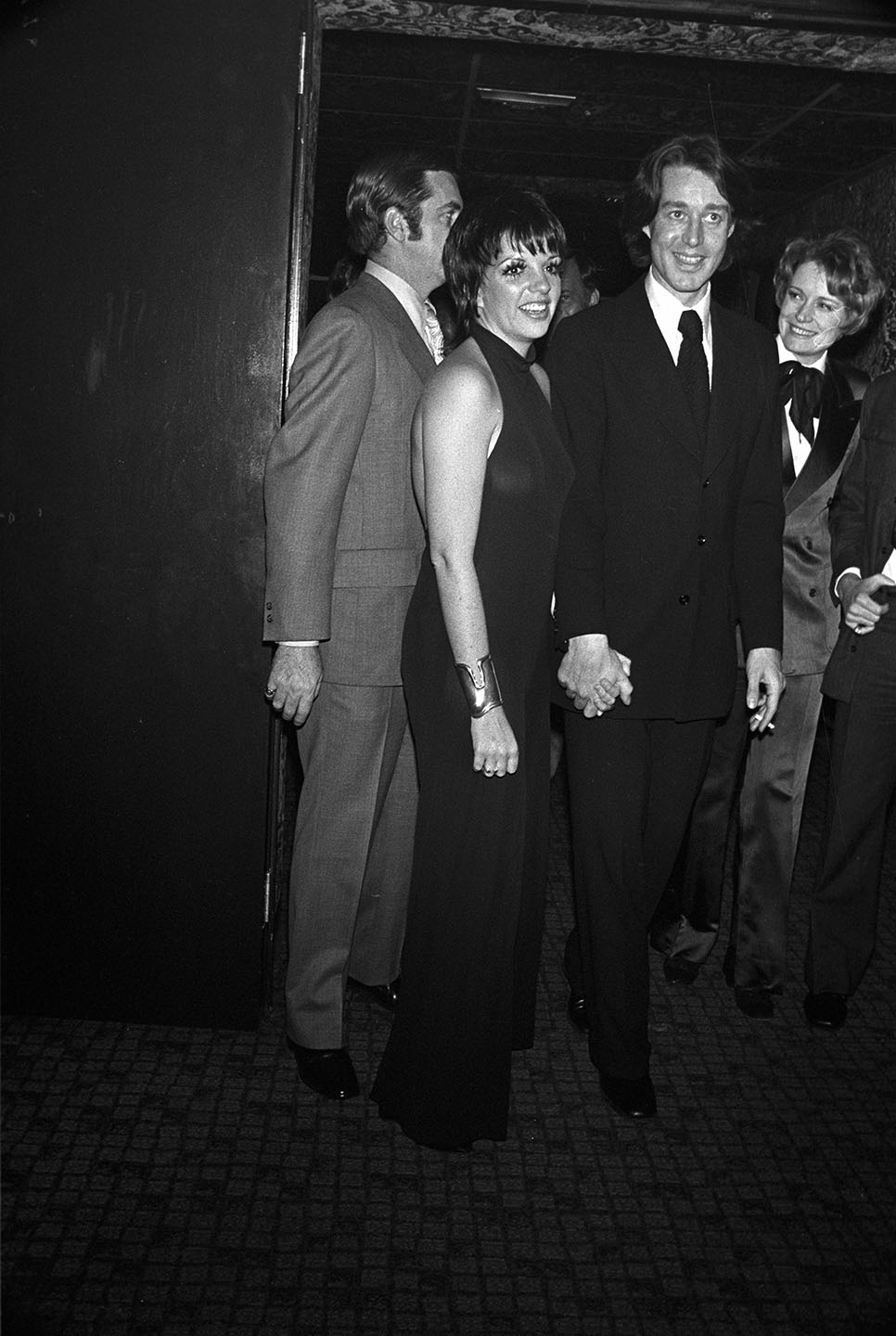 Halston and Liza Minelli attend a supper dance in her honor at Al Mounia Restaurant in New York on Feb. 6, 1972. Fairchild Archive/Penske Media

Liza Minnelli and Halston’s tight bond was one of the most resonating aspects of the Netflix series. The duo was inseparable in the 1970s and 1980s, regularly supporting each other’s careers, traveling internationally and taking on the Studio 54 nightclub scene. Their friendship spanned the majority of his career and extended after Halston was ousted from his own design company in 1984.

Up until his death in 1990, Halston designed stage costumes for Minnelli. She frequently wore his designs for her high-profile appearances, whether at Studio 54, onstage or at the Academy Awards. She most famously wore a custom Halston-designed canary yellow dress and sweater at the 1973 Oscars, where she picked up an award for best actress in her film “Cabaret.”

The actress regularly sat front row at Halston’s fashion shows and would often perform as he presented his collections. She most famously supported him at the WWD-dubbed “Battle of Versailles” in 1973, where Halston and fellow U.S.-based fashion designers Oscar de la Renta, Anne Klein, Bill Blass and Stephen Burrows competed in a fashion showdown against five French fashion designers. Minnelli performed “Bonjour Paris!” as Halston presented his designs on the runway.

Minnelli’s support for Halston has extended well beyond his untimely death and she has supported efforts to revitalize his brand. She sat front row at the first Halston fashion show in 2008 after the brand was temporarily revived by disgraced former film producer Harvey Weinstein, Jimmy Choo cofounder Tamara Mellon and Rachel Zoe.

She also refuses to speak poorly of Halston in the many interviews she’s given about the designer since his death and makes a point to preserve his legacy.

“He was like a big brother to me and a lot of women,” Minnelli told WWD following Halston’s death. “Remember his quote, ‘You are only as good as the people you dress?’ Well, he dressed some great people and he had some great, great friends.” 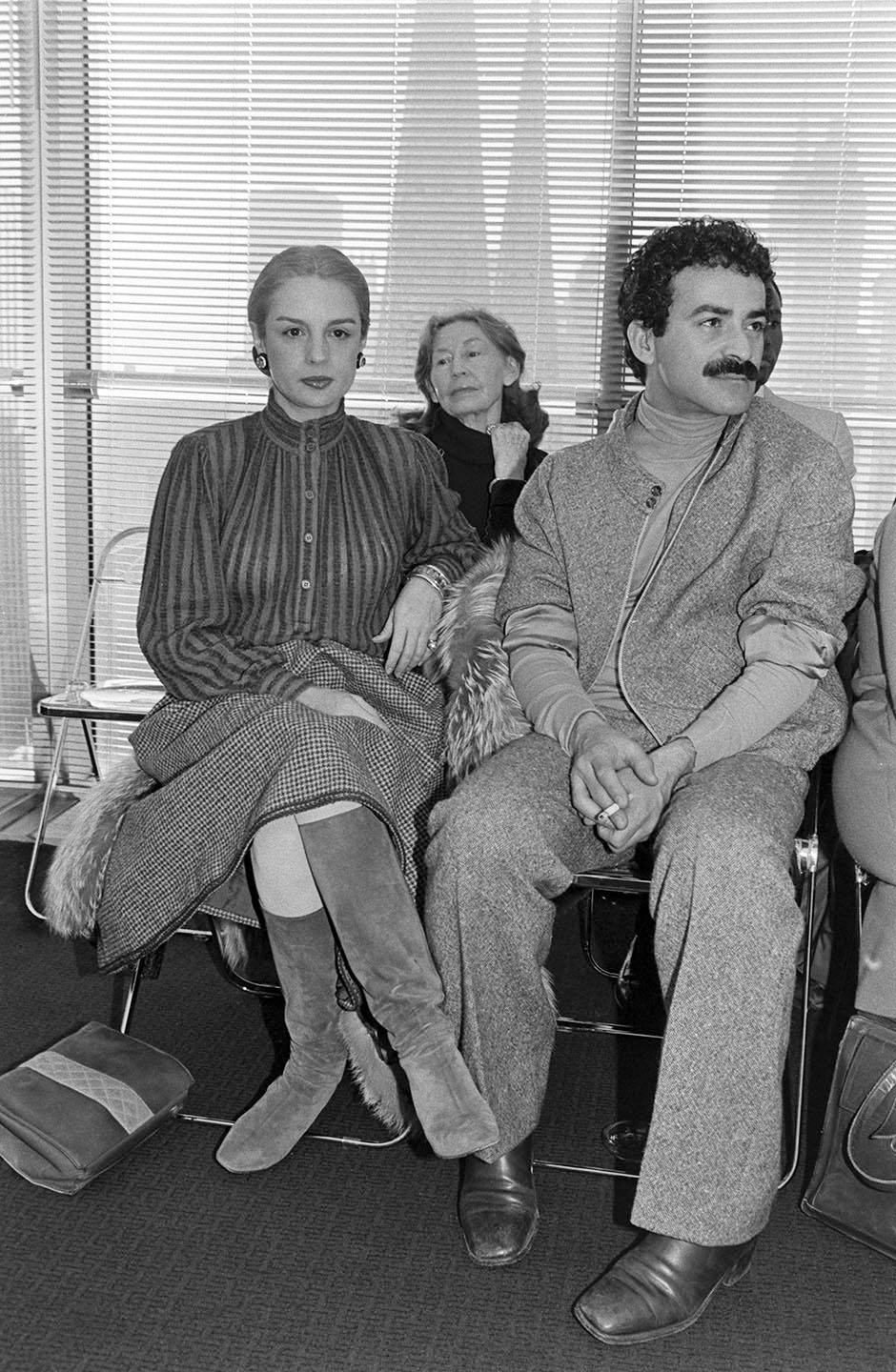 Hugo came to New York City from Venezuela and met Halston through an escort service, according to Steven Gaines, author of “Simply Halston: The Untold Story.” The couple quickly started a romantic relationship and Hugo moved in with the designer. Halston also offered Hugo a position at his company, and the artist soon started designing the windows at Halston’s New York City boutique.

He became close with Andy Warhol and started working as one of the artist’s assistants at The Factory. Warhol was attracted to Hugo’s eccentric personality, and Hugo eventually became one of the artist’s muses and models. According to Interview Magazine, Hugo also worked as a “quasi-editor” at the magazine, which was founded by Warhol.

Warhol and Halston had a friendly rivalry in the 1970s and the artist often leveraged Halston’s close relationship with Hugo to embarrass the designer publicly.

“Andy loved it when Victor showed up at [Studio] 54 in a jockstrap or at a Halston party in a Halston dress, in both cases much to Halston’s embarrassment,” wrote former Interview editor Bob Colacello. “Victor later told me that Andy actually paid him to do these things.”

Halston and Hugo’s relationship came to an end when the designer was fired from his company in 1984 and he relocated to San Francisco. In a 2019 interview with People, Halston’s niece, Lesley Frowick, explained that her uncle “mostly tried to keep [Hugo] out of his life” and that Halston “tolerated him, but he was trouble.”

Many close to Halston blamed Hugo for encouraging the designer’s drug and party habits, which ultimately led to the designer being ousted from his own brand. According to Gaines, Hugo often used Halston for his money and stole pieces from the designer’s home, like a sterling silver candlestick set designed by Peretti. He also accused Hugo of continuing to take advantage of Halston after the designer’s death.

“Victor absolutely would not give me an interview unless I paid him,” Gaines told Vanity Fair. “All the money just went up his nose and on crazy spending and destructive stuff.” 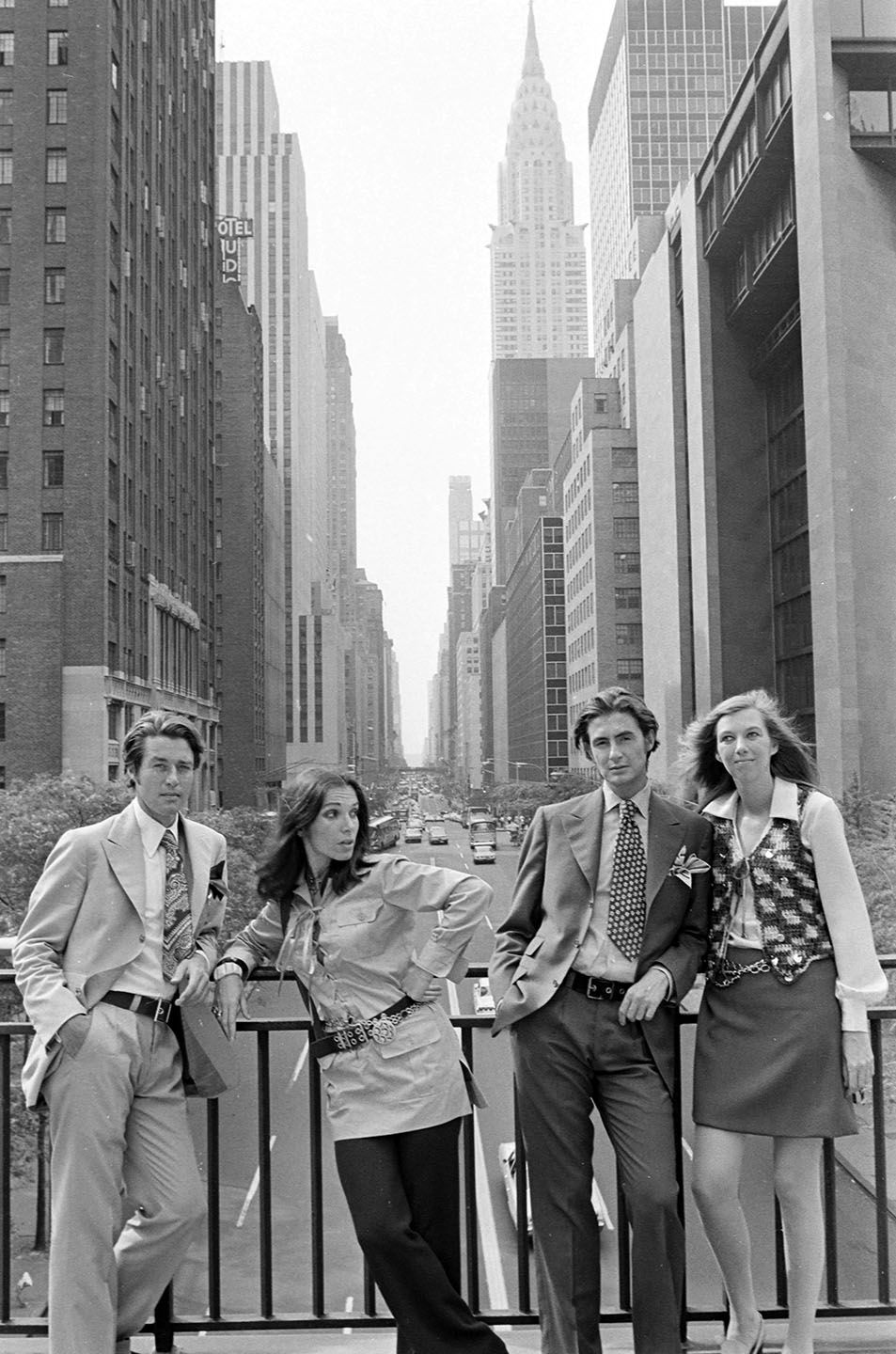 Before Joel Schumacher became a successful film director, started working in the fashion industry. Schumacher graduated from the Parsons School of Design and got a job at Henri Bendel doing the window displays and the store’s visual planning.

Schumacher went to work for Puritan Fashions and designed clothes for the Youthquake division, where he designed his famous “Love Dress.” He moved to Revlon, where his “Frostling dress” caught the attention of Revlon founder Charles Revson. Schumacher was tasked with designing for Revlon’s labels, Evan Picone and Royal Lynne.

In the late 1960s, Schumacher met Halston on Fire Island and struck up a friendship. Schumacher helped Halston with the designer’s first rtw collection, which is depicted in the Netflix series.

“I believe in personality clothes…free and easy enough for the people in them to be fabulous…with great hair and pretty arms and legs,” Schumacher told WWD in 1966. “We’re living in a very physical culture where people are interested in things like exercise.”

Schumacher then left the fashion world for Hollywood in the early 1970s, where he began his filmmaking career by working as a costume designer for films like “The Last of Sheila,” “Sleeper” and “Blume in Love.”

In 1974 he began directing television shows like “Virginia Hill” and “Amateur Night at the Dixie Bar and Grill.” He directed his first movie, “The Incredible Shrinking Woman,” starring Lily Tomlin in 1981.

Schumacher’s body of work as a director spanned from the 1980s to the mid-2010s. Some of his most famous films were “The Lost Boys,” “St. Elmo’s Fire” and “The Phantom of the Opera.” He’s also well-known for his widely panned, campy “Batman and Robin” film in 1997 starring George Clooney as Batman.

The director spoke about his love of movies in a 1975 WWD interview, stating: “In a poor neighborhood like mine, the biggest event was going to the movies. That’s where Fred Astaire was and he was my idol — the way he dressed, everything about him. As soon as I realized there was another world out there, where Fred Astaire wore double-breasted blazers, patent leather shoes and danced on black floors, it was then that I knew…”

Schumacher died in June 2020 at age 80 after a one-year battle with cancer. 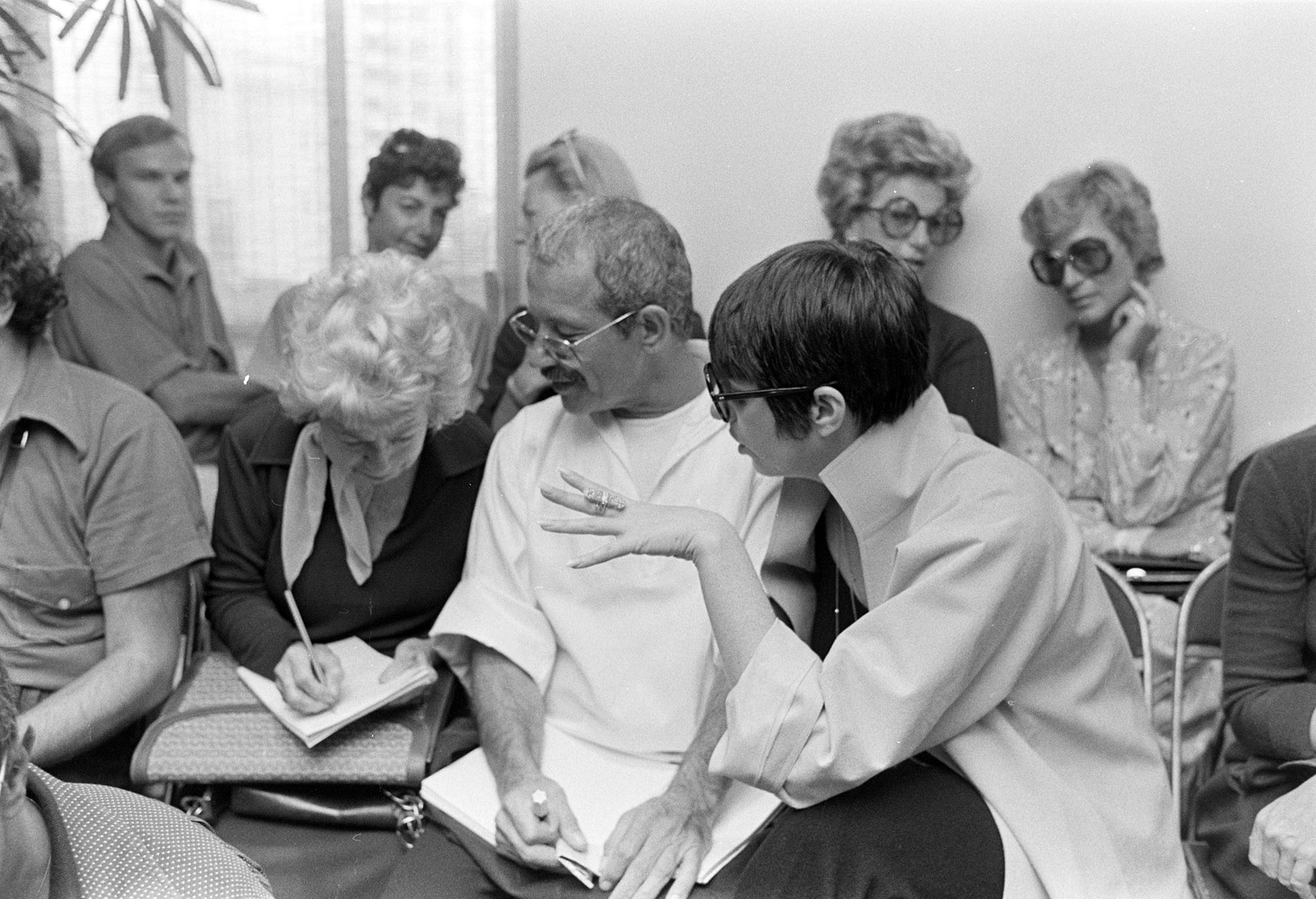 Joe Eula left a lasting impression on the fashion industry as an illustrator. Before meeting Halston, Eula studied at the Art Students League in New York City and worked in Paris with Coco Chanel and with Eugenia Sheppard at the International Herald Tribune. His illustrations also frequently appeared in Life, Harper’s Bazaar and Town & Country.

He became a close collaborator of Halston in the early 1970s and served as the creative director of the designer’s brand for a decade, where he created the ad campaigns. In addition to Minnelli, Eula also supported Halston at the “Battle of Versailles” by designing the backdrop — a black-and-white painting of the Eiffel Tower — for him and the other four American designers presenting collections. He also collaborated with the show’s choreographer, Kay Thompson, on the presentation.

“The only set we had was the one drop of the Eiffel Tower Joe drew and a few sketches he did for ‘Cabaret.’ Other than that, it was just the stage, the gowns and the spotlight — and we won,” Minnelli told WWD in 2004. “Their show was two-and-a-half hours and ours was 33 minutes and we killed them. People stood up and threw their programs. Yves Saint Laurent ran backstage and picked Kay up on his shoulder.”

Eula went on to work closely with Minnelli, creating nearly every one of her concert posters and album covers. He also worked with Miles Davis, Bette Midler and the Supremes.

He spent the later part of his career living in upstate New York and continued to illustrate for publications like The New York Times.

Who Is Halston? Everything to Know About the Iconic Fashion Designer

A Look at Halston and Liza Minnelli’s Real-Life Friendship

Pat Cleveland on the ‘Divinity’ of Fashion’s Halston Era