A MUM who was left with serious burns as a baby has revealed how she's talking to her children about her scars.

Annie Price, 34, from Surrey, was left with horrific facial injuries and only nine fingers when the caravan she lived in set alight. 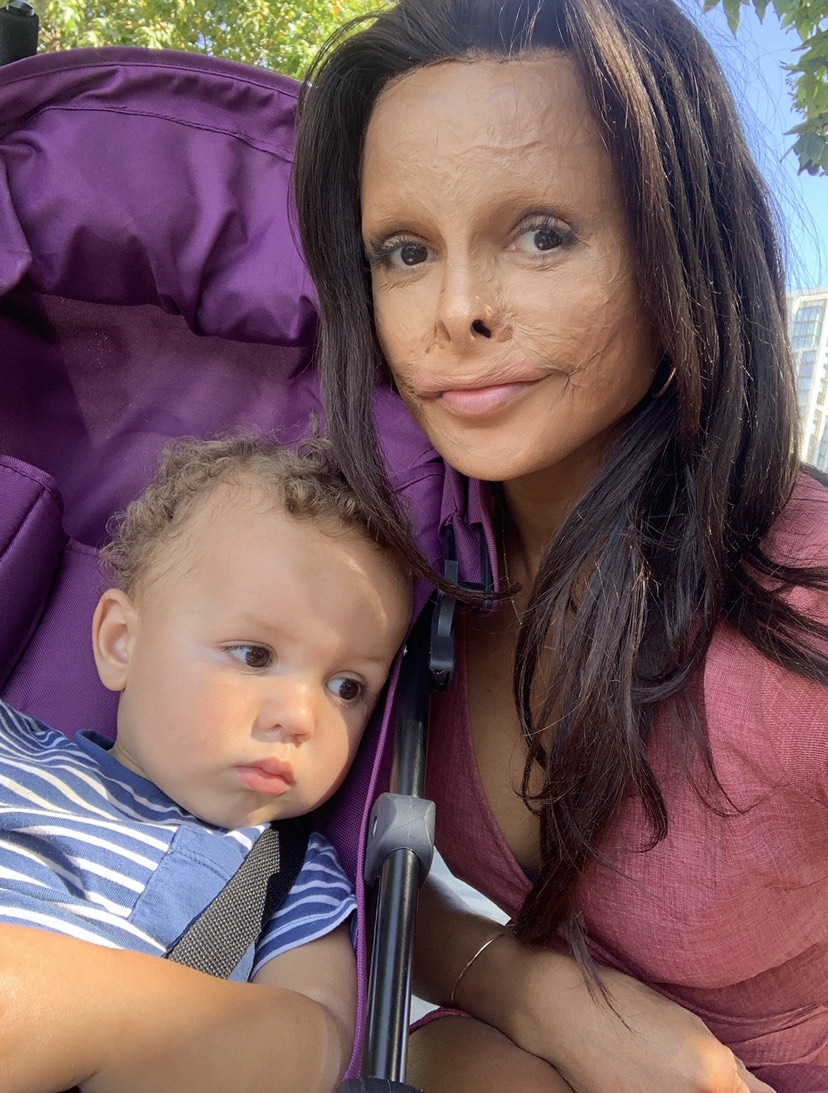 For years, she believed her mum had started the fire in an attempt to kill her, before discovering the truth in 2017.

Now a mum to Sonny, two, and pregnant with her second child, the personal trainer is determined to be open with her kids about her past – however difficult the conversations might be.

Annie spoke to Fabulous as part of BBC's Tiny Happy People campaign, which encourages parents to chat to their kids…

A few weeks ago, Sonny suddenly touched my scars and said, “Mummy, what’s this on your hand?” 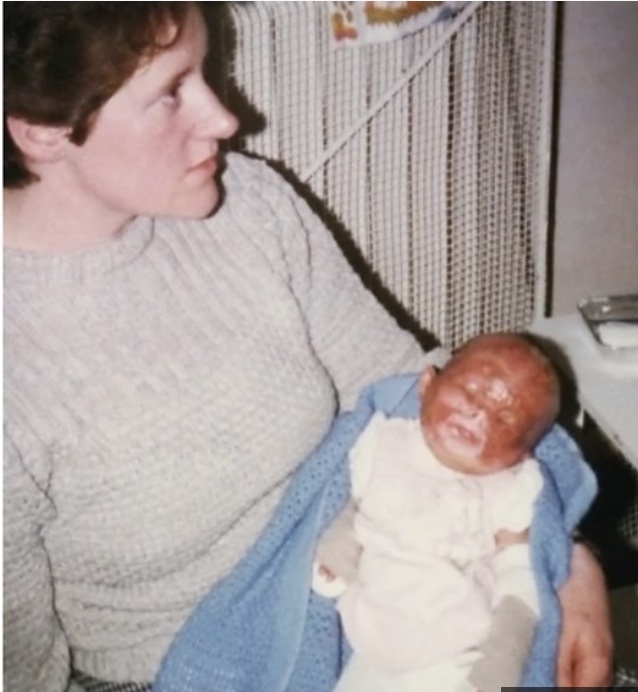 When I explained what they were, he got upset and said, “Where are my scars, Mummy?”

It was one of the first times he’s mentioned it to me. Kids expect to look the same as Mummy, so it’s hard for him to comprehend why I look different.

I just said, “You really don’t want these!” but when he can fully understand, I’ll explain exactly what happened to me.

I felt guilty afterwards, thinking, 'Why did I believe that my mum had tried to kill me?'

I believe in being open with him about how I’m feeling, I’m not afraid of having difficult conversations. Talking to kids is so important, and it’s the reason I’m involved in the BBC’s Tiny Happy People campaign.

When other children come up to ask about my scars, I’m honest with them too, and say, “It was an accident. I was caught in a fire in a caravan when I was four months old.”

My mum Biddy, an Irish Traveller, was married but got pregnant with me after being with a black guy. 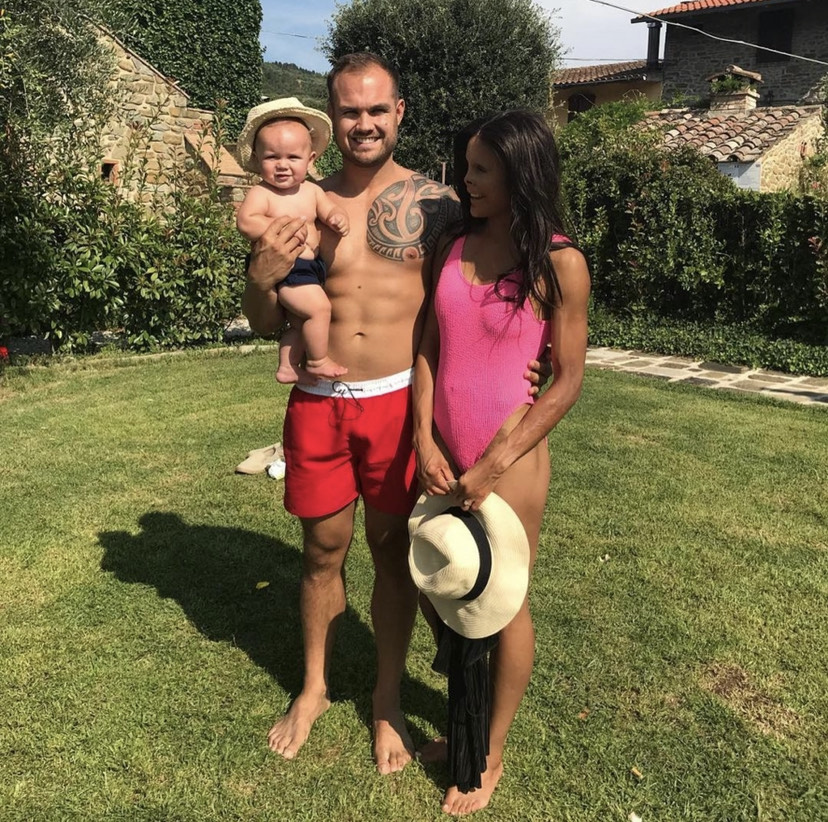 When I was growing up, I was told she’d set fire to the caravan where we lived in Mitcham, South London, on purpose as she was worried I wouldn’t be accepted for the colour of my skin.

It wasn’t until I made a documentary three years ago that I discovered it was probably an accident.

I went into making the film with my eyes open – it’s a sad story, but I wanted to close that chapter in my life.

My family were all white and I was the black kid with nine fingers, so it was all out in the open

But the firemen who'd been at the scene in 1986 told me it was likely a gas fire set light to some cushions, and that my grandmother Bridie rescued me.

I now know those sorts of fires were extremely common in the 80s, with around 2,000 blazes each year.

I felt guilty afterwards, thinking, “Why did I believe that my mum had tried to kill me?”

When you’re a kid, you just take what you’re told as gospel. 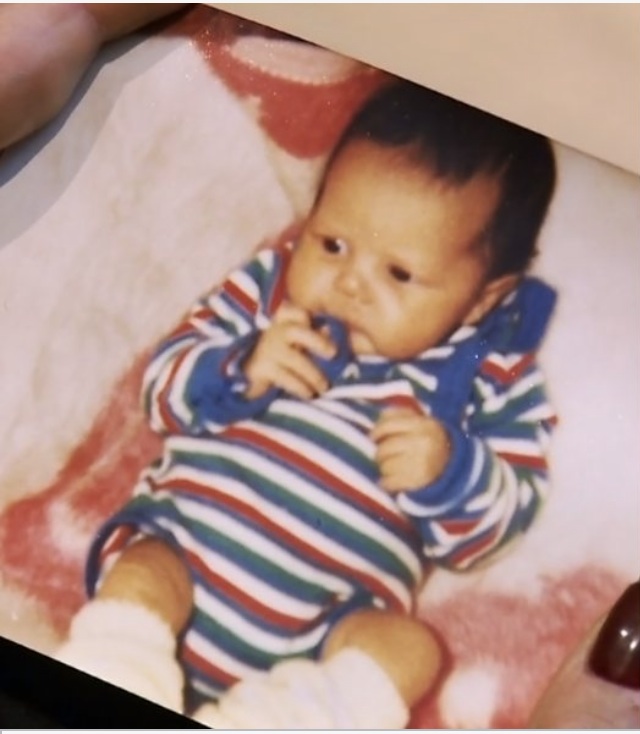 My biological mum is dead now, but at least I could say thank you to the fireman and I met my extended family.

It’s been difficult to keep in contact since then, as their traveller way of life of so different.

After the fire, I was placed with a white foster family.

I never wanted to be the poster girl for people with scars, but the reality is it’s important for me to talk more about looking different

But for years, the council tried to place me with a black family. I’d pose for pictures and they had to explain to me why.

I remember crying when they were taken – no kid wants to hear, “Oh, you’re going to be shipped off”.

But I was so lucky with my foster mum. She’d explain to me what was happening. Nothing was hidden from me although, to be fair, it was hard to hide it! 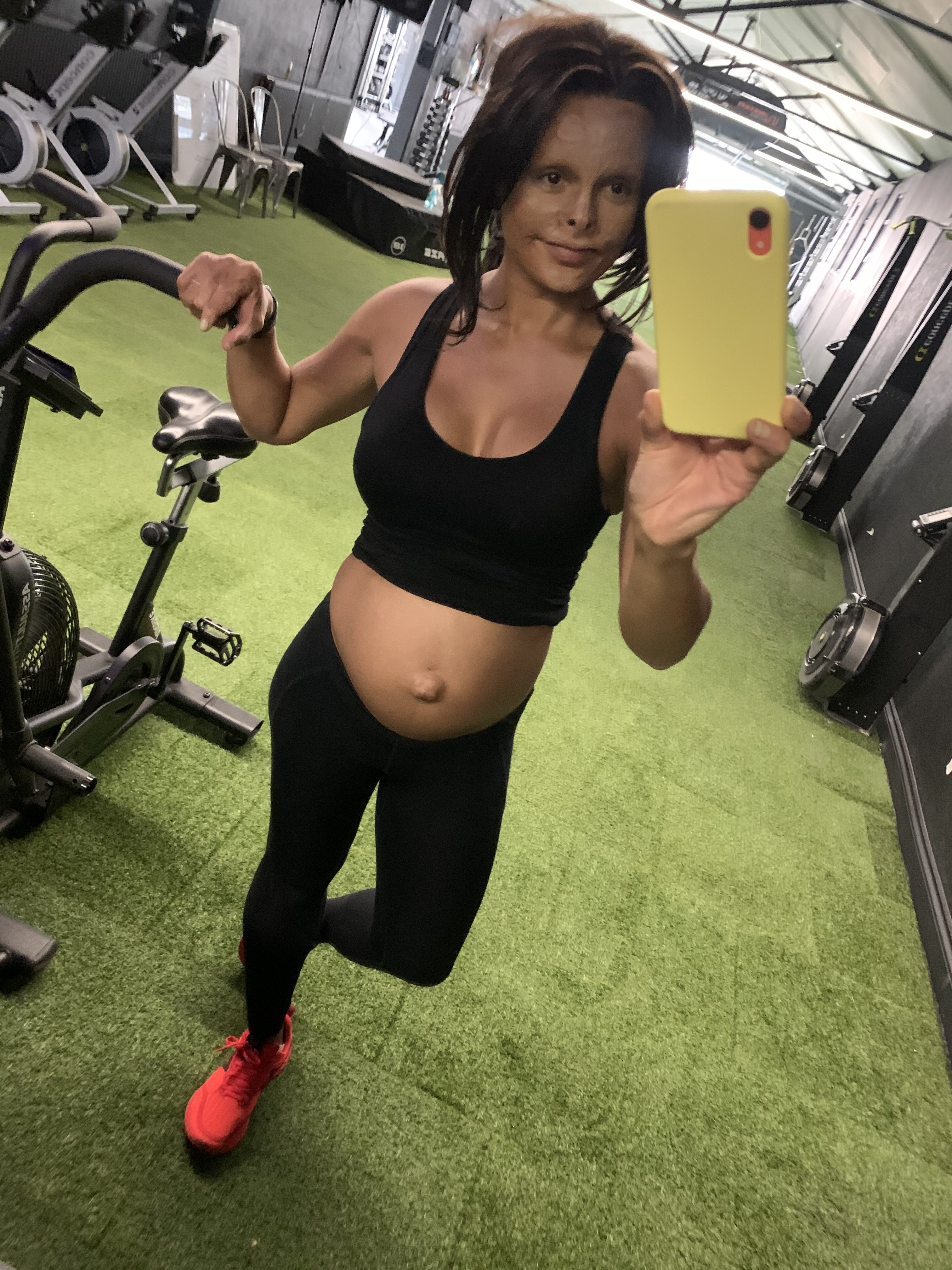 I have an older brother and sister who are blood-related, but my family were all white and I was the black kid with nine fingers, so it was all out in the open.

My foster mum fought hard to adopt me and, when I was six, she was allowed to.

But even though that had been going on in the background, I was surrounded by love and went to a really supportive primary school.

Occasionally new kids would be mean, but I stood up for myself.

I’m used to people coming up to talk to me in Tesco about my scars. It’s happened all my life

I was a happy, chirpy little girl, and that translated to my classmates, so it was rare for anyone to bully me. I never felt, “I’m burned, this is a really big deal”.

The constant trips to hospital were harder. By the time I was a teenager, I was fed up.

I don’t have any hair, and doctors would say, “Do you not wear a hat?”

I wear a wig now but didn't at the time and hated them talking to me like that, as I was perfectly happy not to wear anything on my head. 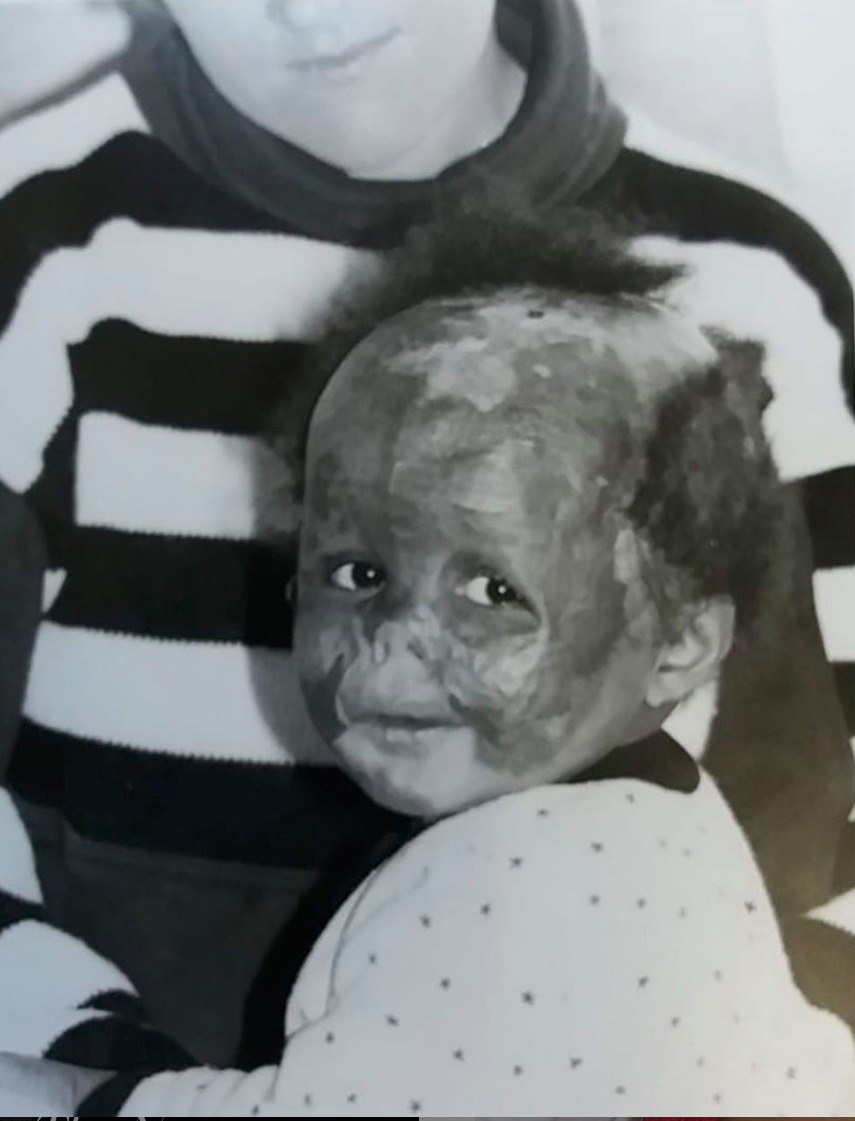 When I was 19, I stopped going for check ups.

I have scars on my face, both hands and my left arm, and minor scars on my back from skin grafts.

But I’m lucky not to have them across my joints – I’m really active in my job as a personal trainer, and my scars didn’t prevent me working out.

Eventually, the skin on my face started to feel tight, and I now have laser treatment to release the scar tissue.

It’s been amazing and changed how I feel about myself physically.

I’ve had an op on my nose to smooth the scar tissue, but I’m going to wait until I have more work done on it.

I’d never say no to plastic surgery – if it helps me look better, bring it on! – but at the same time I’m happy and confident without it.

And now I’m pregnant with baby number two, I’ve got other priorities. 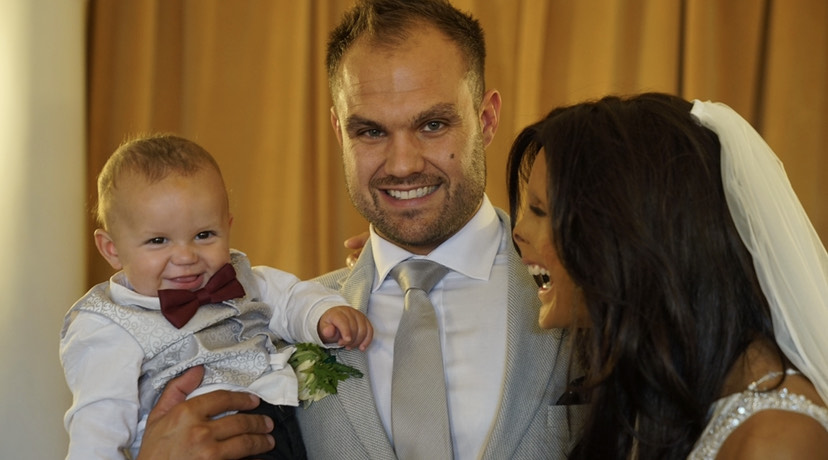 I don’t want to be recovering from an op – I want to be chatting to Sonny and breastfeeding my new baby, who’s due in October.

The thing is, I’ve always looked this way. It’s not a new thing I have to learn how to deal with.

I’m used to people coming up to talk to me in Tesco about my scars when I’ve just popped into to buy a pint of milk. It’s happened all my life.

When I was in my twenties, my struggles weren’t “do I look pretty?”, it was about everyday stuff like paying the rent and building my confidence up.

Now, as a personal trainer, I love helping others boost their confidence too.

I’m a big believer that relationships take time, too – I’m the type of person who walks into love.

When I met my husband Sam at the gym where we both worked, we started off as friends, chatting all the time.

Conversation is really important to me – which is why I support the BBC’s Tiny Happy People campaign, which provides resources to children to improve their language skills.

My mum taught me how to express myself growing up, and I want to be the same with Sonny.

Of course, if I have an important Zoom call I’ll let him have a screen for half an hour – but kids learn their language from us, so I chat away to him as much as I can.

I’ve been crying a lot during this pregnancy – it’s been strange being pregnant during the pandemic and going to appointments by myself – but I’ll always sit down with Sonny and explain if I’m having a trying day.

The key is making hard conversations part of everyday life.

Now because of the Black Lives Matter movement, I feel like everyone in the country is having difficult conversations, and it’s made me think I could do more.

For a while, I thought I was doing a great job for inclusion just by cracking on with life and doing well in my career.

I never wanted to be the poster girl for people with scars, but the reality is it’s important for me to talk more about looking different.

Telling my story is important, as is hearing other people’s – that’s what lifts the world up.

Related posts:
Celebrity News:
The King & I
Larry King dead: TV host legend dies aged 87 weeks after being hospitalised with Covid-19
Kristin Cavallari & Jay Cutler Are Not Back Together, Source Says After Exes Post Same Picture on Social Media
Tim Matheson swipes Melania Trump, praises Jill Biden: Nice to have a First Lady who 'can speak English!'
Castle staff insisted on watching sex scenes for Netflix's Bridgerton
Recent Posts
This website uses cookies to improve your user experience and to provide you with advertisements that are relevant to your interests. By continuing to browse the site you are agreeing to our use of cookies.Ok