PARIS — Four years after his game-changing collaboration with Supreme at Louis Vuitton, Kim Jones is again breaking new ground by instigating the first co-branded ready-to-wear and accessories collection for Dior.

The men’s artistic director tapped Sacai designer Chitose Abe to work on a capsule line of 57 items that will bear a logo fusing the identities of both labels, with the Sacai name written inside the “i” in Dior — a first for the French fashion house. The collection, dropping in November, is sure to be one of the most anticipated this year.

Billed as “a creative conversation between two designers, two heritages and two cultures,” it leverages the Japanese brand’s signature hybrid constructions to combine Dior tailoring with Sacai’s sportswear hallmarks — as evidenced by a suit jacket spliced with a bomber style, and Saddle bags made from technical fabrics.

“Sacai is one of my first stops when I go to Japan,” Jones said in a telephone interview from London. “I’ve always loved [Chitose Abe] and I just think she’s one of the coolest women in the world. And we talked about doing this since I was at Vuitton, and then finally it happened.”

“When he’s in Tokyo, he often comes to our showroom and we just chat for a long time, relaxing, just talking about which kinds of stores he should go to, which kind of vintage store is good in Tokyo. That’s the most fun part of when he stops by Sacai,” Abe said via Zoom from Tokyo.

With the coronavirus pandemic slowing international travel to a trickle, the globe-trotting Jones has been grounded in London. He estimated he and his team have designed 20 collections for Dior so far this year, including capsule lines, and another eight for Fendi, where he took over as artistic director of haute couture, rtw and fur collections for women last fall.

“I love Japan. I haven’t been for over a year now, which is the longest in 20 years I haven’t been. I normally go at least six times a year. I always work on things that I miss doing in real life and seeing,” he said. “It’s just a really key mix between what Dior and Sacai is, and it was a way of having a conversation through the pandemic.”

Both Abe and Jones are serial collaborators. Sacai has partnered with brands ranging from sportswear behemoth Nike to emerging designers like Tomo Koizumi, but Abe said it was important that the balance of power should be equitable.

“Whenever I decide to do a collaboration, it always needs to be equal between the two parties. This is very important for me. Neither one should be considered better or have more power in the project. Since I’ve been friends with Kim for a long time, I very much enjoyed working with him from the start,” she said.

“Dior is a very respected heritage brand which I’ve admired ever since I decided to become a designer, so it’s a huge honor. It’s also a brand that has historically demonstrated the importance of innovation, but I’m sure that for a maison like this, the decision to add another brand name to its own is not taken lightly. Doing so shows that it is committed to always being innovative and challenging,” she added. 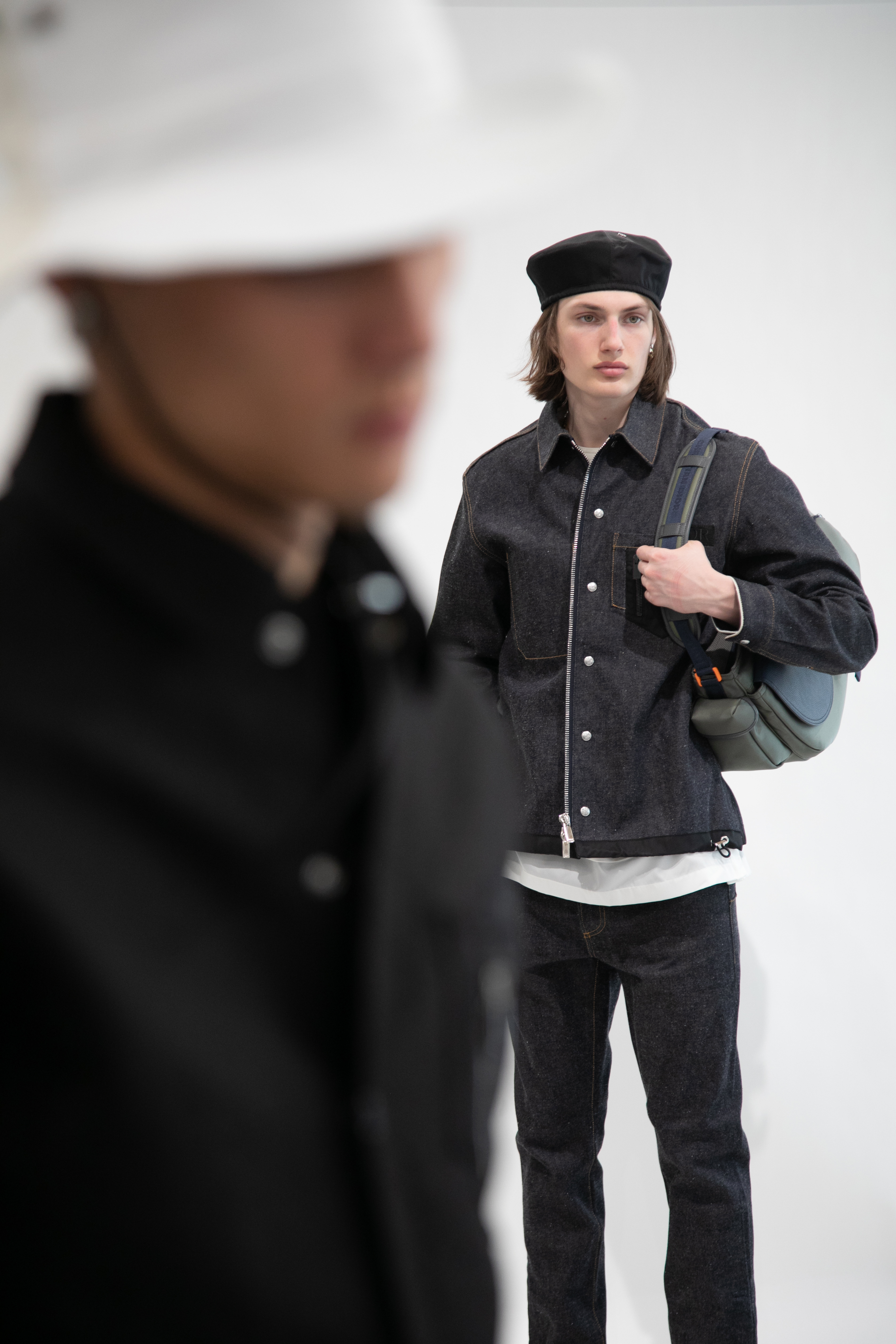 A look from Dior’s capsule collection with Sacai. Alfredo Piola/Courtesy of Dior

Jones helped ignite the luxury streetwear phenomenon with the landmark 2017 collaboration between Louis Vuitton and Supreme, the cult New York skatewear brand, and a collection with Japanese label Fragment Design that drew long lines in Tokyo. In addition, he has designed for brands including Nike, Converse and Umbro.

The designer has also nurtured the thriving relationship between fashion and art through rotating seasonal tie-ups with artists like Kaws, Daniel Arsham, Kenny Scharf and Peter Doig — an approach that Jones ties to founder Christian Dior’s early career as a gallerist.

“I think you learn different things, working with different people. That only strengthens fashion, in a way. I don’t really care about my name attached to anything, because otherwise I would have my own label,” he said, brushing off critics.

“Every collection in the world has graphics in it. Why not use an artist that you admire to do those graphics with, and then you work in a different way? Peter Doig was with us in every single meeting and fitting that we did, and he became a member of the studio,” he said. “I think people should, instead of sitting in front of a computer criticizing, actually do some work and learn things.”

He only works with people he feels naturally drawn to. “Otherwise, it’s not real, and I think people can smell that a mile away and don’t like it. I think everything we do, we do with people that we know as friends first, and then work with after,” he said.

The logistics of these collaborations have become a little more challenging during the pandemic, but the gestation of the capsule collection with Sacai was surprisingly hands-on nonetheless. 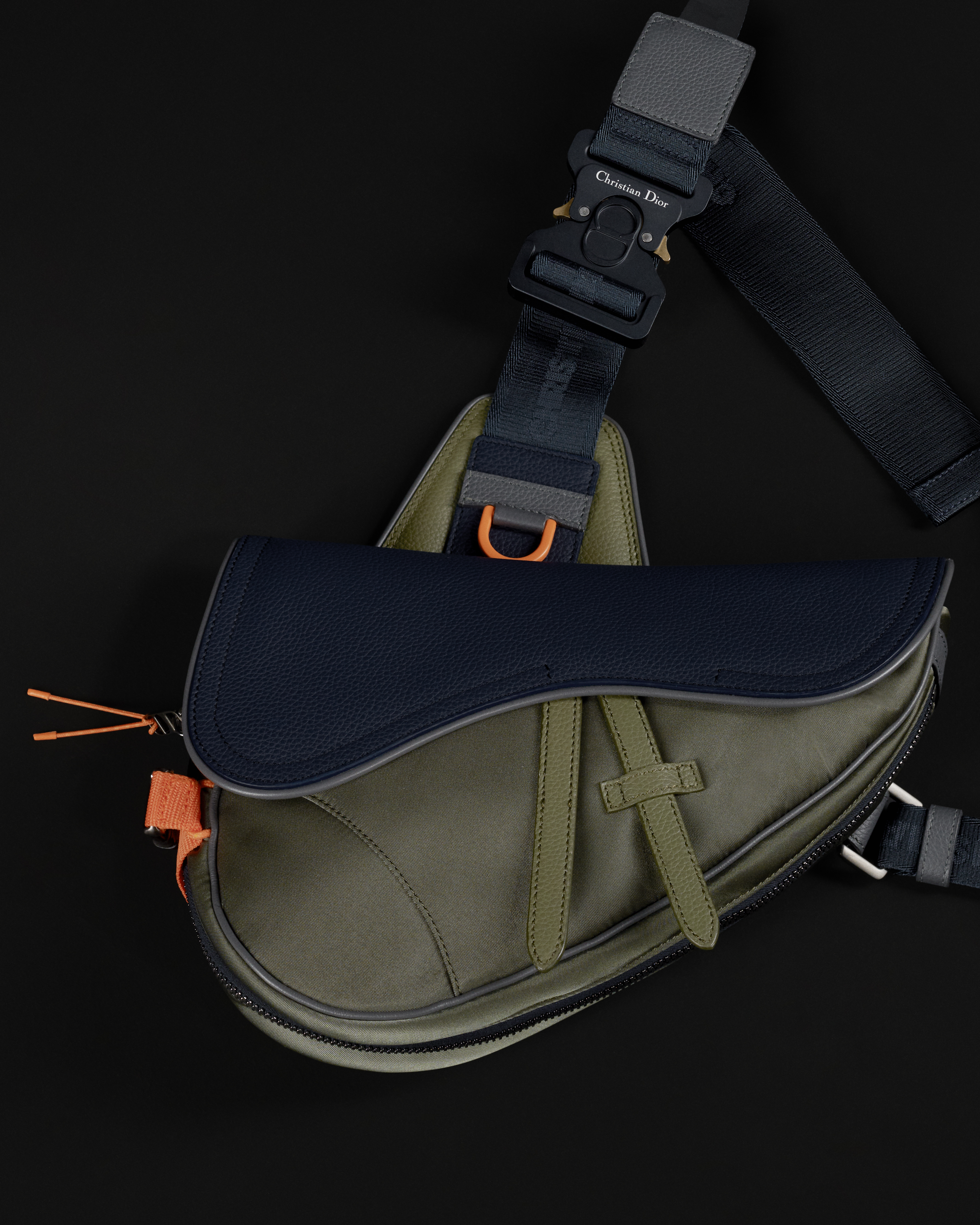 A Saddle bag from Dior’s capsule collection with Sacai. Charly Gosp/Courtesy of Dior

“We had a set of samples that went back and forth, and then got amended by each house each time they were fitted,” Jones explained. “Because you can’t make clothes by Zoom. It just isn’t possible. When they’re from an expensive brand, it just doesn’t work.”

As the prototypes shuttled between London, Paris and Tokyo, some clear codes emerged: overcoats and the Oblique suit were combined with sporty fabrics drawn from the Sacai universe, while Dior’s signature floral decorations merged into a cable-knit motif on an oversized cream sweater. Drawstrings and zips appear as decorative elements on items like a Japanese denim workwear jacket.

In total, there are 38 pieces of rtw in a monochrome palette of black, dark navy, white and cream. The collection includes 10 Saddle bags, including a version in olive nylon and leather, with utilitarian details like orange buckles and a zippered pocket, inspired by the MA-1 pilot flight jacket that is another Sacai staple.

“Obviously, I have a lot of respect for the Saddle bag, which is one of the Dior icons. When Kim first joined Dior, it was the first bag that he gifted me, and I’ve been loving it and using it for a long time,” Abe said. “We did bring some softness to the bag, using the MA-1 nylon, which is our signature fabric, so we brought an outdoor feel to the bag.”

Jones said the bags were his favorite items. “They’re properly technical and they’re very Japanese-led design, which I don’t think we’d have thought about if we hadn’t spoken to Chitose,” he remarked.

Abe added a couple of extra soles to the Dior Snow and Dior Explorer boots, and created jewelry blending the CD logo in gold- and silver-finish brass with Sacai’s trademark pearls. “The whole collection is very much a hybrid of Dior and Sacai: Dior’s tailoring and the techniques, plus our details, like for example the denim shirt with the drawstring,” she noted.

“It’s very innovative and groundbreaking of Dior to have a project like this with Sacai. I’m very happy, and I feel that this groundbreaking philosophy is something that is shared not just between Kim and I, but also between Dior and Sacai. It was a wonderful challenge,” Abe added. 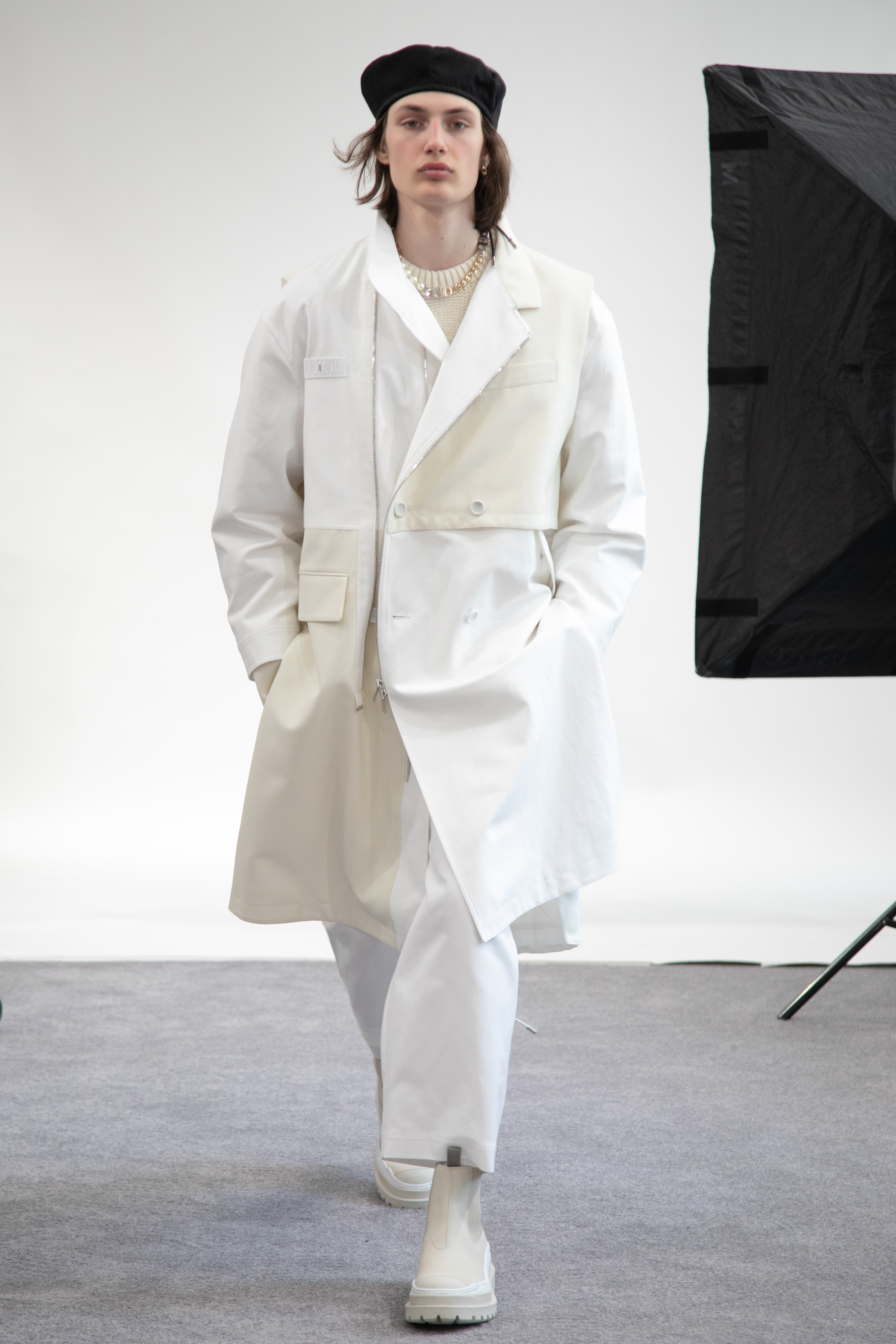 A look from Dior’s capsule collection with Sacai. Alfredo Piola/Courtesy of Dior

The retail rollout of the collection has yet to be worked out, especially since travel restrictions are still in place in some regions, although Abe hopes to be in Paris in early July for the presentation of her eagerly awaited one-off couture collection for Jean Paul Gaultier, twice delayed because of the pandemic.

“It’s a very challenging time, still, even in Japan. But we are starting to travel again and working on some retail projects. I am always moving forward, even if it means that it needs to be taken step by step,” she said.

Jones, however, was cautious about the prospect of returning to Japan. “Asia isn’t really opening up very fast compared to the rest of the world,” he said. “We’re talking about things going back to normal, but the one part of the world that I love, which is Asia and Southeast Asia, I don’t think we’ll be going back to anytime soon.”

He said the Sacai capsule line would be priced slightly above Dior’s main collection, and was confident it will generate buzz. “I think it’s going to be a bit of a surprise for people. I mean, Sacai collaborates with lots of people, because they’re very good at bringing their name to people, but I think to work with us is an exciting thing,” he said.

Asked whether it was the start of a new cycle of co-branded clothing collaborations at Dior, after partnerships with Rimowa on luggage and Jordan Brand on sneakers, the designer demurred.

“This is the last of the series. When I did Supreme and Fragment at Vuitton, there were [four] more people on that list. One was Virgil, one was Matthew, one was Yoon and one was Sacai, and I’ve worked with all of them now, so it’s a personal thing. It was about working with all the people I love and my peers. It was less about which house it was applied to,” he said.

As Dior puts the finishing touches on its historic headquarters at 30 Avenue Montaigne, under renovation since 2019, he sees his mission as making sure the brand doesn’t stand still.

“I’m sure Christian Dior would be doing these things. When I went round the maison that they’re restoring inside, I was thinking, ‘I wonder what he would think about this?’ But he’d probably be delighted to see it coming into the 21st century and being a super successful brand. And to be super successful, you have to adapt. I mean, they’re the only brands that are still around on a big level,” he reasoned.

“Christian Dior would definitely want to be up with the modern world. I don’t think he’d want to be lagging behind,” Jones said.