A BLOKE in his 40s has been shamed for being 'creepy' after a rental advert he posted revealed that he lives with female roommates in their 20s.

He has two women staying with him currently, and posted an add seeking a third, but insists they must "work from home" and be a part of "our little community". 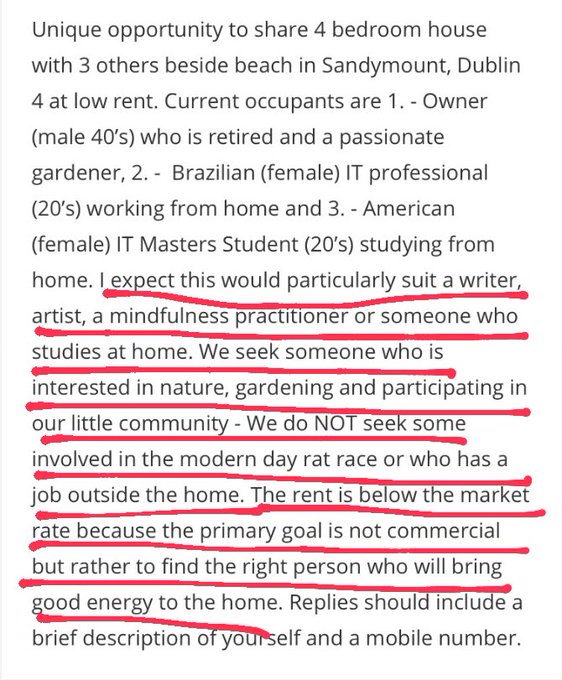 The rental ad was shared on Twitter where social media uses took aim at the concerning list of expectations, which led him to reportedly take it down.

And as the post went viral, she later shared a link to the advert for the room which is €550 per month, saying: "This is getting some traction so here is the link in case anybody feels like telling this man he's a weirdo".

In the advert, the landlord said that the new housemate should not have a "job outside the home", and that the potential tenant should be "someone like a writer, artist or student" who will prioritise gardening.

This is getting some traction so here is the link in case anybody feels like telling this man he's a weirdo.

It read: "Unique opportunity to share four bedroom house with three others beside beach in Sandymount, Dublin for low rent.

"Current occupants are 1 – Owner (male 40s) who is retired and a passionate gardener, 2 – Brazilian (female) IT professional (20s) working from home and 3- American (female) IT masters student (20s) studying from home.

"I expect this would particularly suit a writer, artist, a mindfulness practitioner or someone who studies at home. We seek someone who is interested in nature, gardening and participating in our little community – We do NOT seek some involved in the modern day rat  race or who has a job outside the home."

The landlord also pointed out that the rent is "below the market rate because the primary goal is not commercial but rather to find the right person who will bring good energy to the home."

Social media users were quick to question the bonkers criteria, but also the man's choice of current tenants, which prompted him to delete the advert, according to Mail Online.

One woman questioned "what is going on here" before warning potential tenants to "stay clear."

Many other responses compared the landlords requests to a cult and said his advert seems "creepy".

One person wrote: "Sounds like one of those cults where it's just a pervy man wanting young women using the false pretense of a community and other cultish jargon, that's my hot take I stand over it."

Having received backlash the man reportedly edited the advert before it was finally deleted.

Meanwhile, a woman shares the ‘creepy’ message she received from bloke who wanted to rent her spare room.

In other news, this woman slammed the 'creepy' bloke who accidentally text her.

And this woman was stunned after she texted a builder to ask why he walked out halfway through a job and received a very creepy reply.