At a time of global investment mania, New Yorkers can’t seem to get enough of one of the world’s oldest speculative assets. They’re not buying, though. Just admiring.

“Stunned today by the masses of beautiful tulips blooming all over the Upper East Side, and glad we can appreciate them as flowers rather than the bitcoin of 1636,” the filmmaker Whit Stillman wrote in a message on Twitter after posting a photo of a bright yellow tulip bed on Park Avenue.

Indeed, many people have noted and documented the flowers sprouting from medians, sidewalk planters, parks and gardens around the city.

“I think they absolutely look more stunning than I have recalled in years,” Olivia Rose, the owner of a plant design studio, wrote in an email about the tulips she has observed on First Avenue near the United Nations building. “Taking tulip strolls has been a daily activity. I think the street beds in the last five years have gotten a lot better in general.”

Have the tulips changed, or have we?

“I can’t tell if they’re more beautiful than last year or if I’m so traumatized and downtrodden by the year’s events I’m just happier to see them,” Dasha Nekrasova, an actress and a host of the podcast “Red Scare,” wrote in a message on Instagram. “They definitely seemed abundant and caused me to reflect with gratitude on the attention and care with which someone planted them.” 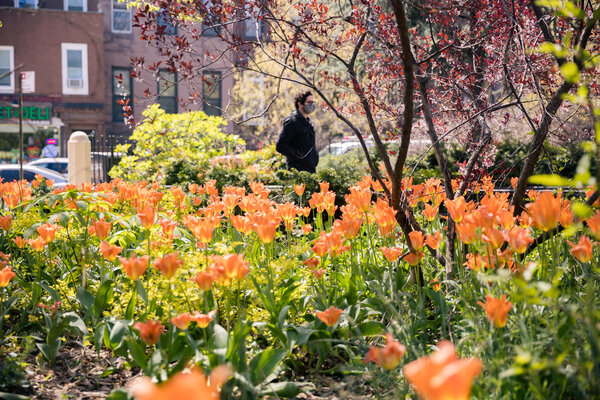 Puja Patel, the editor in chief of the music website Pitchfork, said that on her walks around the Fort Greene and Clinton Hill neighborhoods of Brooklyn, the tulip beds have been impossible to ignore. “To me, they seemed bigger than usual,” she said. “And there was a stronger variety of colors, almost like they were velvety in texture — honestly, the most radiant version of the tulips that I have seen in Brooklyn in my 10 years of living here.”

So yes: After a year of languishing, New York is flourishing. More so than usual?

Matthew Morrow, the director of horticulture for the New York City Department of Parks & Recreation, said in an interview that the city planted the same number of tulip bulbs as it does most years: approximately 110,000 citywide.

Other tulips in the city are planted by private groups, like the Fund for Park Avenue, a nonprofit that maintains the flowers on the avenue between 54th and 86th Streets. In an email, Barbara McLaughlin, the fund’s president, said the group had planted 60,000 bulbs, just as it does every year.

So, how to explain the enthusiasm for this year’s blooms?

At the beginning of the pandemic, demand for tulips plummeted as events were canceled and flower shops closed their doors all over the world. One Dutch grower said in an interview with the CBC that his company threw away a billion flowers. But over the course of last year, “sales were up quite a bit,” said Jan Doornbosch, a tulip importer who runs the International Bulb Company. “That goes for the entire gardening industry.”

Dimitri Gatanas, the owner of Urban Garden Center in Manhattan, said that plants and bulbs of all sorts were flying off shelves amid the year’s “planting craze.”

Liza Franquinha, the branding and events director for Crest Garden Center in Williamsburg, wrote in an email: “In 2020 we had a lot more requests from independent community groups for garden supplies. I think people are using public spaces more and want them to be beautiful, and are going out and doing rogue planting.”

Mr. Gatanas also said that over the past year he has received a surge of new business from landlords and real estate agents, who hired him for “curb appeal” projects. “These landlords are trying to put the peacock feathers up and attract more new tenants,” he said.

Mr. Doornbosch estimated that his commercial clients, including landscape contractors hired by landlords to beautify streets, spent “about 20 percent more” than usual on bulbs last year.

Weather may have played a role in improving this year’s crop. “We had 24 consecutive days with snow on the ground in February, which goes a long way to keeping the soil moist at a time when those bulbs are creating roots,” said Mr. Morrow, of the parks department.

This can increase both the quantity and quality of the tulips, he said: “That stronger root system means that they can absorb more nutrients and just provide more energy into putting out basically what those plants are bred for, which is to have a huge, beautiful bloom.”

The cold weather may even have coaxed bulbs planted in previous years to bloom again, Mr. Morrow said, even though tulips in the United States typically bloom only once (unlike in cooler climates like the Netherlands, where they often thrive perennially).

But temperatures in New York don’t fully explain the phenomenon: After all, the flower shock isn’t just local. People across the country have remarked on what seems like a bumper crop for spring blooms (including, in a phone call, this reporter’s mother in the Bay Area).

“The past week or so, I’ve been amazed by the beauty and the quantity of tulips — it’s like they’re in every front yard I pass,” Adam Bexton, a St. Louis resident, wrote in a message on Twitter. “I had started my daily walks this time last year, but I don’t remember seeing all of these beautiful flowers.”

Some are chalking it up to exuberance as people edge back toward normalcy.

“Everybody’s looking at this spring with a different set of eyes, right?” Mr. Gatanas said. “If you left a prison or a cave after six months, you know, even a butterfly will look like a work of art.”

Mr. Morrow noted that “there’s a hopeful feeling in the air.” “And then a colorful tulip sort of heightens that effect,” he said. “I know it does for me.”

Christopher F. Chabris, a research psychologist who has studied selective attention, said there may be “a memory phenomenon going on here.”

“A couple of days ago, I was noticing all the white flowering trees around here in central Pennsylvania, and I’m sure I’ve seen them before, but for some reason they felt more noteworthy this year,” he said in a phone interview.

He suggested that, because of the pandemic, “we have fewer recent experiences of being impressed by the spring flowers, so they become even more impressive.”

And when people did venture out last year, they were probably focused on social distancing and fear of the virus, he said, not on spring flowers.

With memories of last year’s crop diminished by those of early-pandemic panic, the tulips “create a greater impression on you, not because they’ve been erased from your memory before, but because you have less recent memories of them,” he said, comparing the sight of the flowers to “the taste of a food you haven’t eaten in a while.”

And once you start noticing something, it’s hard to stop. Dr. Chabris cited the titular experiment from his book, “The Invisible Gorilla,” in which many people failed to see a man in a gorilla suit walking through a video scene in which they were instructed to watch people playing with basketballs. “The thing about the gorilla is many people don’t notice it,” he said. “But then once they do, it’s kind of hard to take your attention off of it.”

The same may be happening with tulips.

“I saw just two rogue bright red tulips in Jackie Robinson Park a couple of weeks ago,” Yevgeniya Kats, an East Village resident, wrote in a message on Twitter. “It was strange but beautiful, and that really set it off for me. I started noticing tulips everywhere.”

Furthermore, a collective emotional state — wounded and weary, but with optimism rising as vaccines bring the end of the pandemic into view — could be priming people to notice hopeful signs. “One of the things that determines what we notice and what we pay attention to is what we’re expecting,” Dr. Chabris said.

Researchers studying vision and attention have found that when people are expecting to see a certain color, they’re more likely to notice other objects of that same color, even if these are not the objects they were told to look out for.

“I think it’s not unreasonable to say that may operate with emotions, too,” he said. “The more something we noticed matches our emotional state, maybe the emotionally positive state of optimism and thinking about the future and so on, maybe the more likely we are to notice it.”

On a Tuesday in mid-April, visitors to the annual tulip festival at the West Side Community Garden in Manhattan pondered the link between emotional states and perceptual capacity while soaking in the flowers, nearly 100 varietals in all, planted in concentric beds around a small lawn.

“Everything is just more beautiful after going through this horrible year,” said Monica Barrett, a real estate appraiser and environmental activist, gesturing at a patch of tulips striped in psychedelic scarlet, yellow and orange hues. “Looking at these, they’re hypnotizing. It’s almost like I’m high!”

Judy Disla, a retiree and volunteer at the festival, said: “I’ve seen more all around the city. I think we just appreciate these things so much more now.”

Last year the garden was locked during tulip season as a pandemic precaution, but she still dropped by to look at the flowers through the gate. “We’ve all become a little more attached to nature than we were,” Ms. Disla said. “It’s just made us so much more cognizant of the beauty of nature and the healing power of nature.”

Judy Robinson, the president of the garden’s board of directors, described how people have been telling her and others that they’ve been waiting for this all year: “‘Through this horrible year, the garden has really been sustaining me, and you don’t know how much this means to me.’” She added, “People are so, so happy.”

Dozens circulated through the garden over a weekday afternoon, gazing in rapture at the jewel-toned blooms. At one point, attention shifted from flowers to phones as news of the Derek Chauvin verdict broke.

“It’s an ecstatic moment,” an older man said to a friend, as helicopters soared above. Soon enough, faces turned back to the flowers, which were swaying gently in the breeze.