With so little to do in April 2020, Danielle Lavey and Drew Feldman quickly learned they had easy banter. That was enough for them to keep the conversation going.

“We were quickly reaching a point where if we don’t meet in person, there’s only so far Zoom dating can go,” Mr. Feldman said. So, despite being what they euphemistically called “corona-conscious,” in late May, Mr. Feldman flew from Dallas to Knoxville, Tenn. His above-the-neck attire: two masks, glasses, a hoodie and oversize headphones.

Despite Ms. Lavey’s parents’ hesitations about contracting the coronavirus, they reluctantly agreed to host Mr. Feldman.

“A usual first date that would be in a bar or doing some activity, was in my parents’ living room,” Ms. Lavey said.

The couple had connected via CoronaCrush, a Facebook group started by a few friends to facilitate Jewish singles wary of the usual dating apps, to meet during the pandemic (even though both barely use Facebook). They are one of its success stories. There have been at least seven engagements and the group now has more than 20,000 members.

Ms. Lavey, 28, who was raised in Los Angeles, graduated from Northwestern. She is a health care management consultant with Oliver Wyman, the consultancy based in New York. She had moved to Manhattan eight months before the pandemic, but when it started, moved in with her parents in Knoxville, where they had recently relocated.

Mr. Feldman, 30, is from Dallas, and studied theater at Oklahoma City Community College. He’s an independent film and theater director. While prepandemic he had been living in Israel, he was working on a documentary about Johnny Cash in Dallas when the pandemic started.

The morning after his arrival, they went to get a coronavirus test, at Ms. Lavey’s mother’s request. Then they went grocery shopping, and prepared Sabbath dinner together. It went well enough for him to extend his visit for two more days. 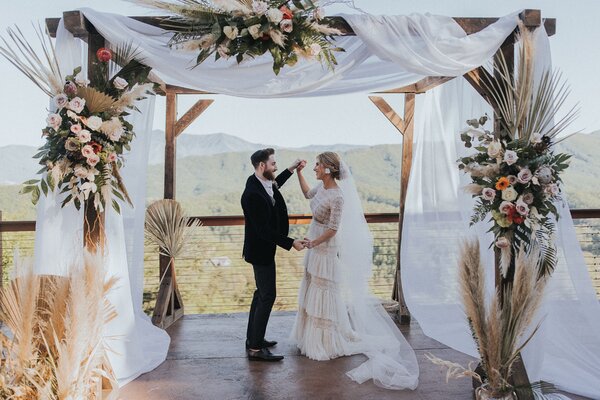 A few weeks later, Ms. Lavey traveled to Dallas; again, they prepared and ate Sabbath dinner together, this time with Mr. Feldman’s family.

There was another visit by Mr. Feldman, and then by midsummer, with remote work the norm, he moved into his own place in Knoxville that July.

Soon, they were discussing marriage. They consulted a self- described “kosher astrologer” in Israel who deemed them a good match.

“Drew is so loving, sensitive and caring,” Ms. Lavey said. “I feel so supported and such unconditional love from him.”

In November, Mr. Feldman proposed at a surprise picnic that included a short documentary he made called “A Quarantined History of Danielle & Drew.”

Ms. Lavey said yes, but that wasn’t enough for her.

“It’s not the 1800s,” she said. “Getting proposed to makes you feel so cared for, I wanted him to experience that, too.”

A friend deemed hers a rebuttal proposal; it was in the form of a book of 45 haikus she wrote about their courtship.

They were married May 6 by Rabbi Josh Livingstone, a college friend of the bride, at the Magnolia, an events space in Pigeon Forge, Tenn. Sixty guests, nearly all of whom were vaccinated (including the couple) attended and another 280 watched remotely.

After the traditional Jewish ceremony, a bluegrass band played. During the reception, the groom sang his own version of “Helpless” from the musical “Hamilton,” with family members joining in a choreographed dance.

“When I look at Danielle, I think, ‘I can do marriage, partnership, and build a life with this person,’” Mr. Feldman said. “It doesn’t sound romantic on the surface, but it’s the deepest recognition of all the amazing possibility and potential that I see with her.”