The Tokyo Summer Olympics may be about sports, but the opening ceremony produced several major fashion moments that made an impact on viewers.

The Summer Games officially started on Friday with more than 11,000 athletes from 206 countries coming together at the opening ceremony in Tokyo. The ceremony was unlike any in Olympics history, as the show was scaled back and virtually no spectators were permitted due to the pandemic.

Despite the changes, the opening ceremony produced several impressive moments, especially among the sartorial choices of the athletes and performers. Japanese singer Misia, for one, had a viral moment when she sang Japan’s national anthem dressed in a rainbow, cotton candy-like couture dress from designer Tomo Koizumi.

Many team uniforms also made an impact on viewers, both ones that resonated for their high-fashion quality and homage to various cultures and others that became fodder for memes.

Here, WWD looks at 11 of the standout fashion moments from the Tokyo Summer Olympics opening ceremony. Read on for more.

A Look at Olympic Style Over the Years 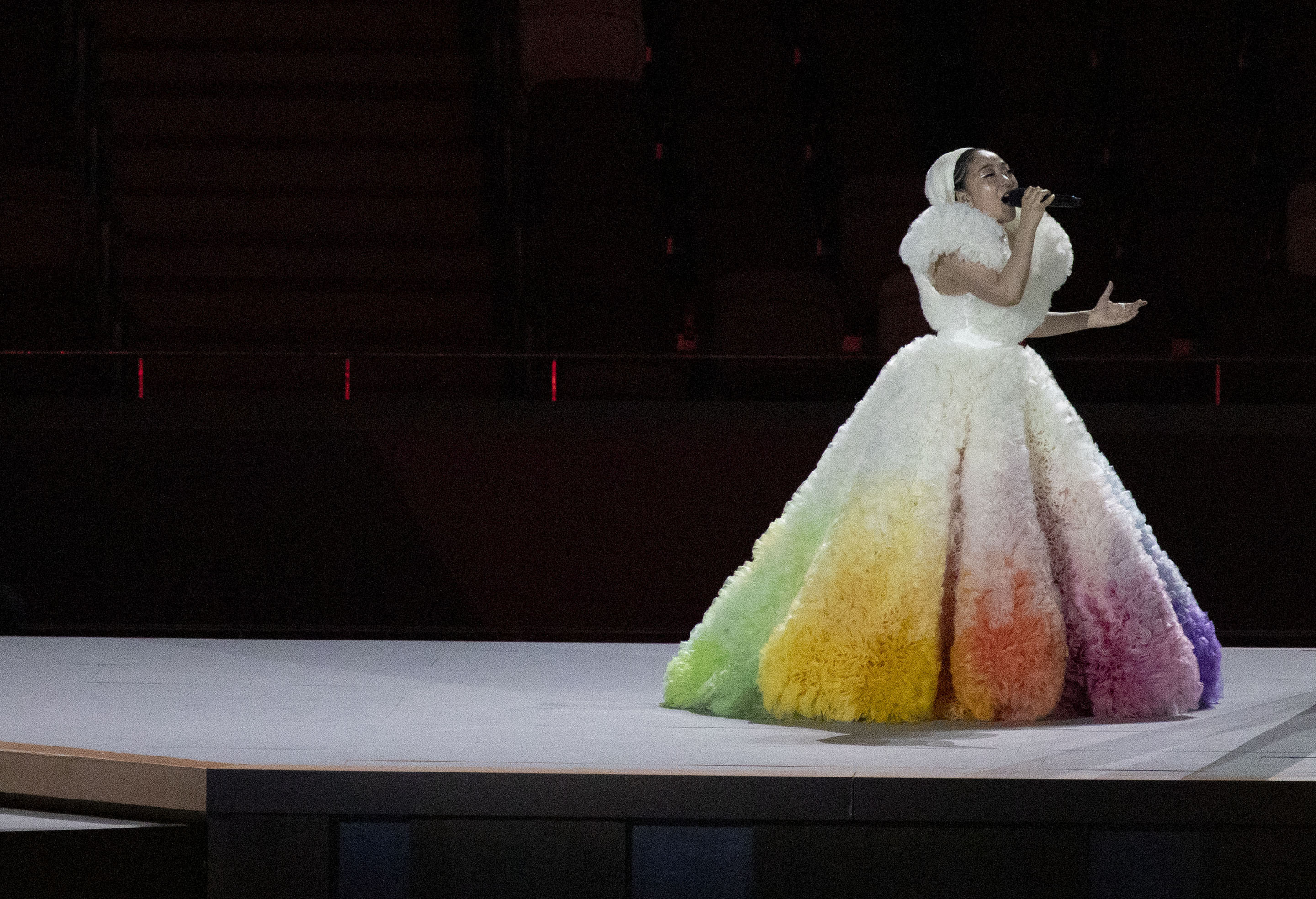 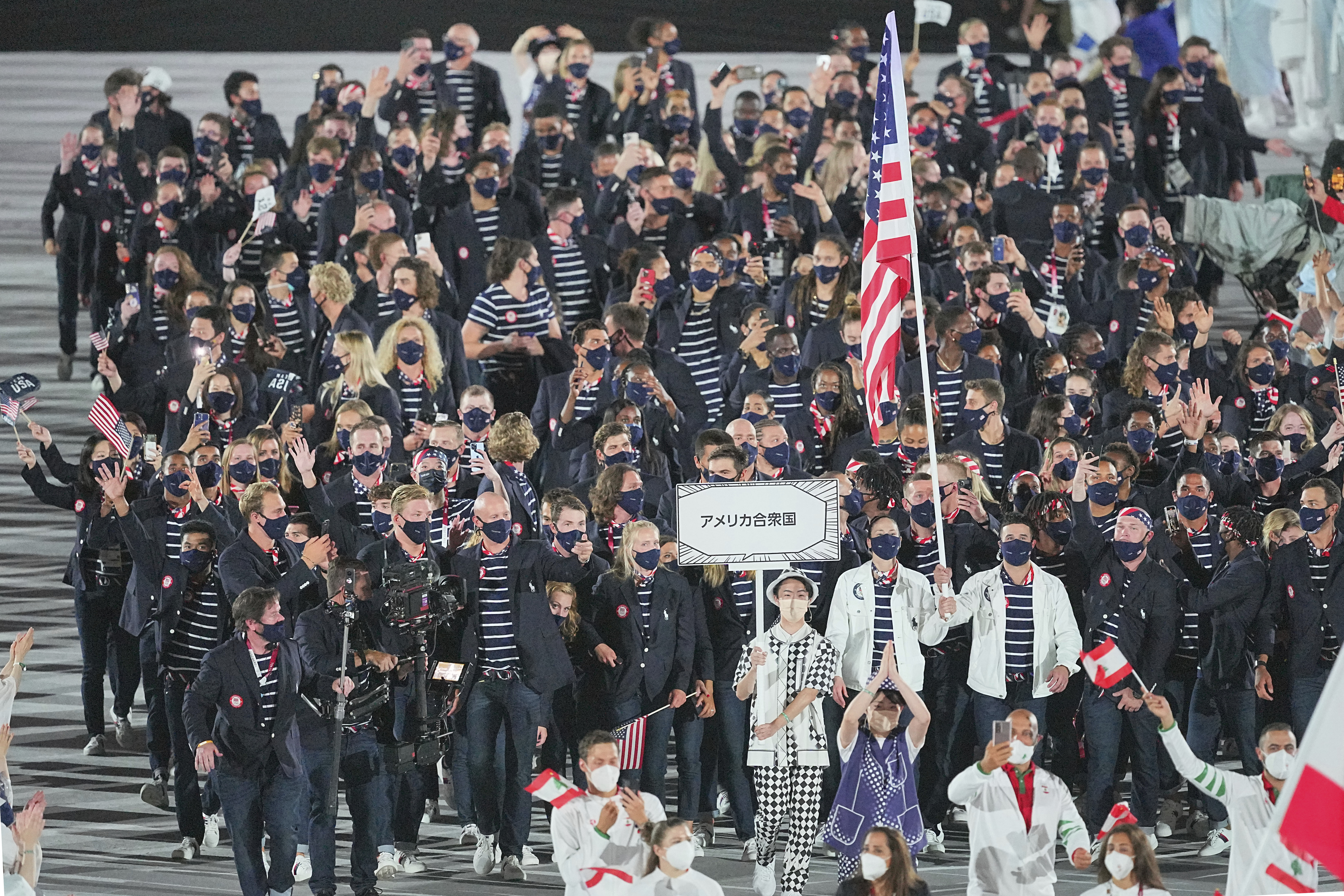 Ralph Lauren returned as the official designer for Team USA’s Olympics uniforms. The athletes’ opening ceremony look was reminiscent of the patriotic styles Lauren has made in the past. It was comprised of a navy blazer and trousers, a striped short-sleeved shirt and a custom face mask. 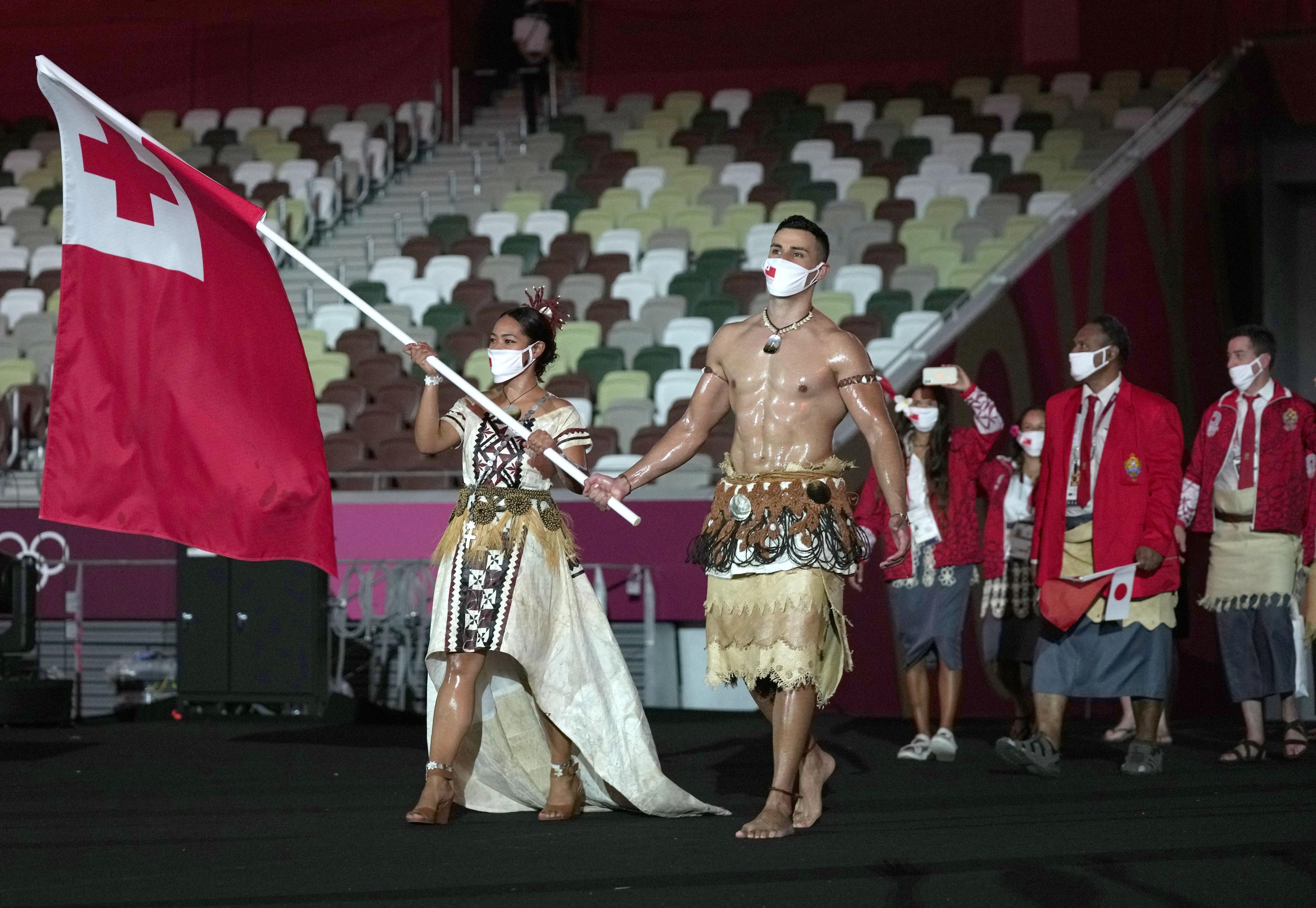 Pita Taufatofua carries the flag of Tonga during the opening ceremony of the Tokyo Olympics. Kyodo

Tonga’s Pita Taufatofua again made an impact at the opening ceremony where he reprised his role as the country’s flag bearer. Taufatofua, a taek won do practitioner and skier, caused another stir online when he appeared shirtless — and apparently covered in oil — as he carried the flag. 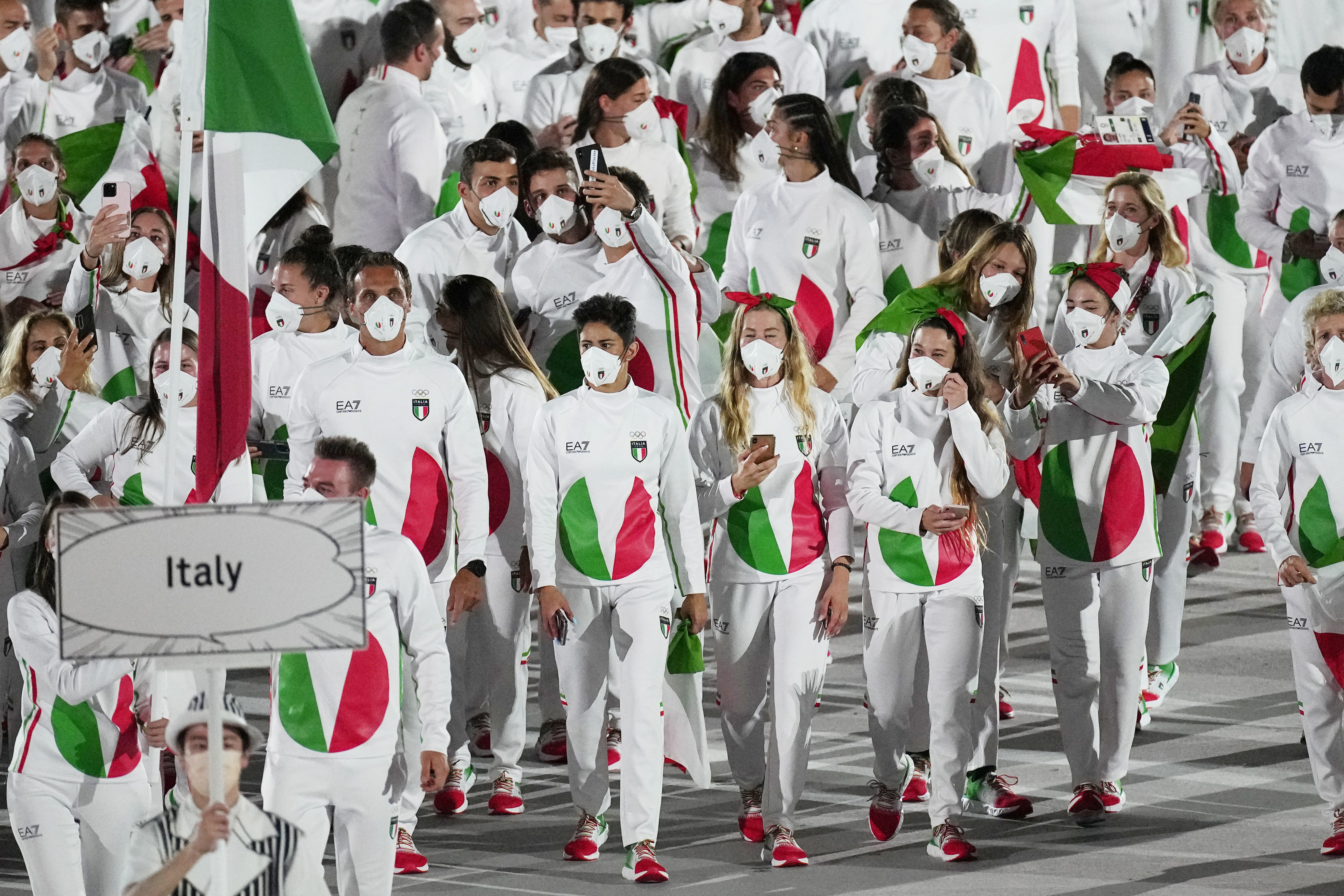 The Italian Olympic team’s opening ceremony uniforms didn’t resonate with viewers, with many taking to social media to poke fun at the patriotic uniform. The Giorgio Armani-designed uniform consisted of a white sweatshirt embellished with a circular, Pac-Man-like motif in green, white and red paired with white sweatpants. 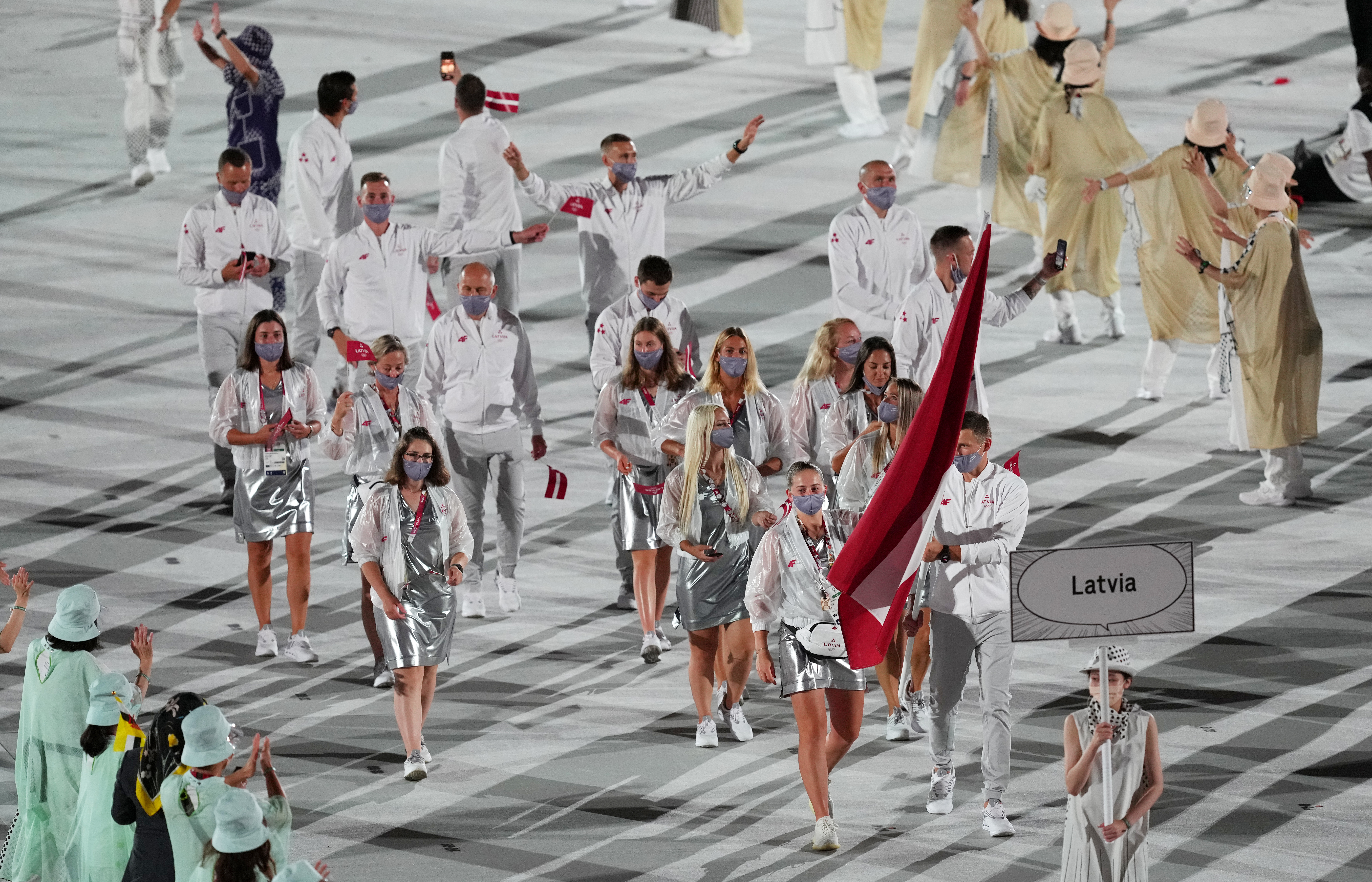 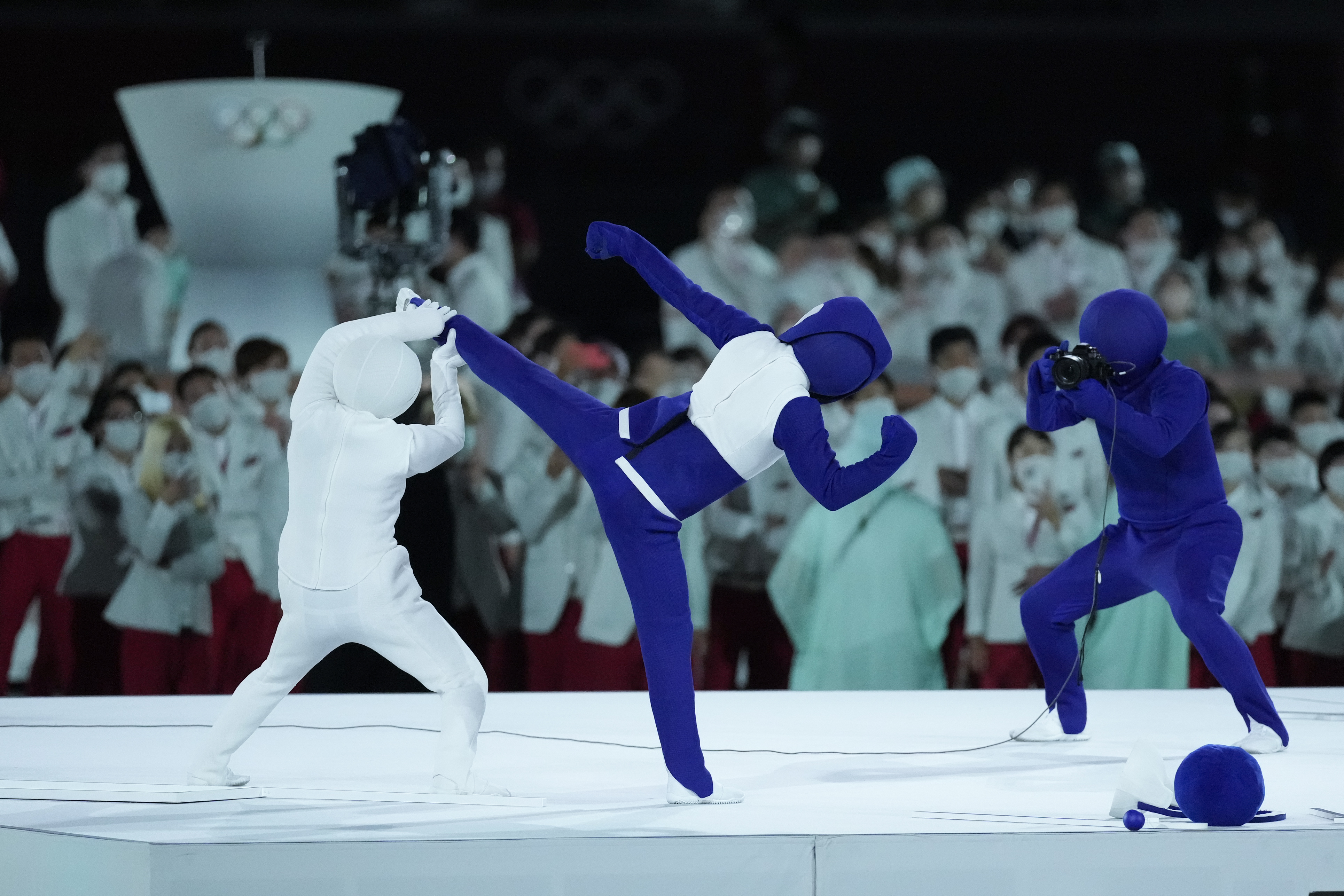 Actors perform during the opening ceremony at the Tokyo Summer Olympics. AP

One standout performance during the opening ceremony was the Olympics-themed human pictogram performers, where three performers dressed in white and blue with a circular headpiece acted out all 50 of the Olympics pictograms. The performance was a tribute to the 1964 Tokyo Olympics where the pictograms were introduced to transcend language barriers and communicate across teams. 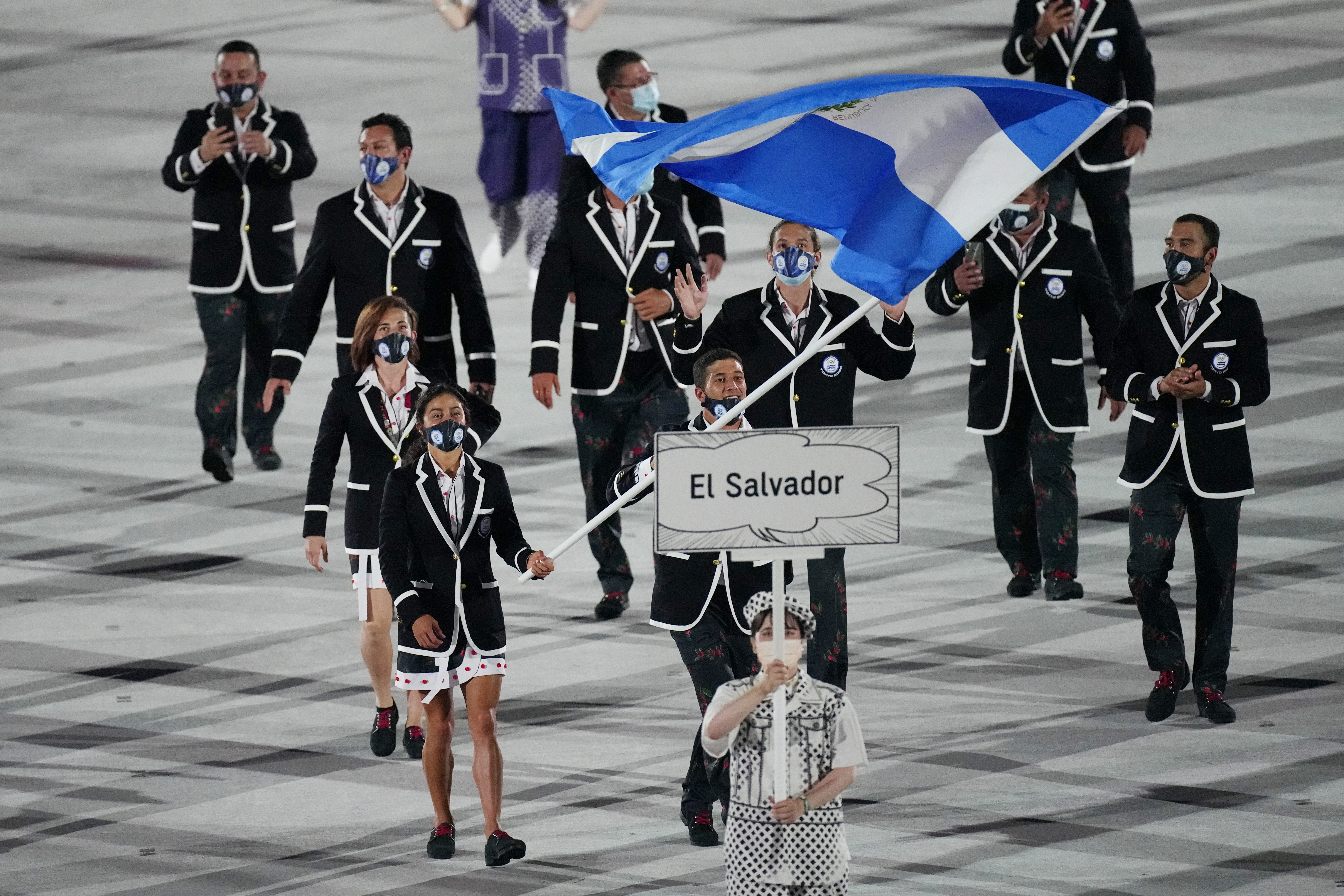 El Salvador’s Olympic team also had a chic fashion moment during the opening ceremony. The team wore a fitted black blazer designed with a white trim over floral-printed trousers or skirts designed by Rowing Blazers and local boutique, Zótico. 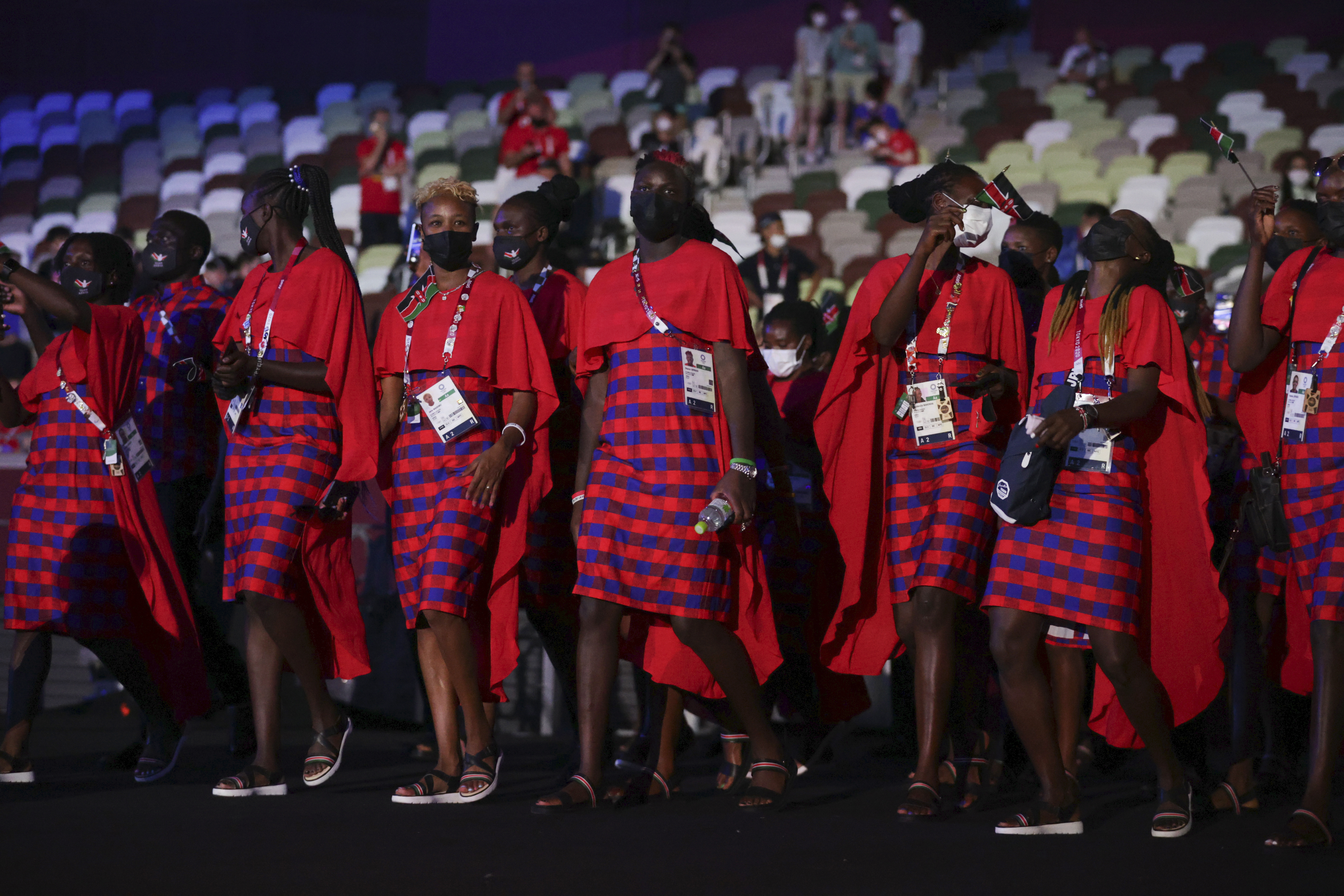 Kenya’s team of more than 40 athletes had one of the most colorful uniforms for the opening ceremony. The team’s female athletes wore Maasai print dresses under a red caped bolero jacket and the male athletes wore matching shirts with black trousers. 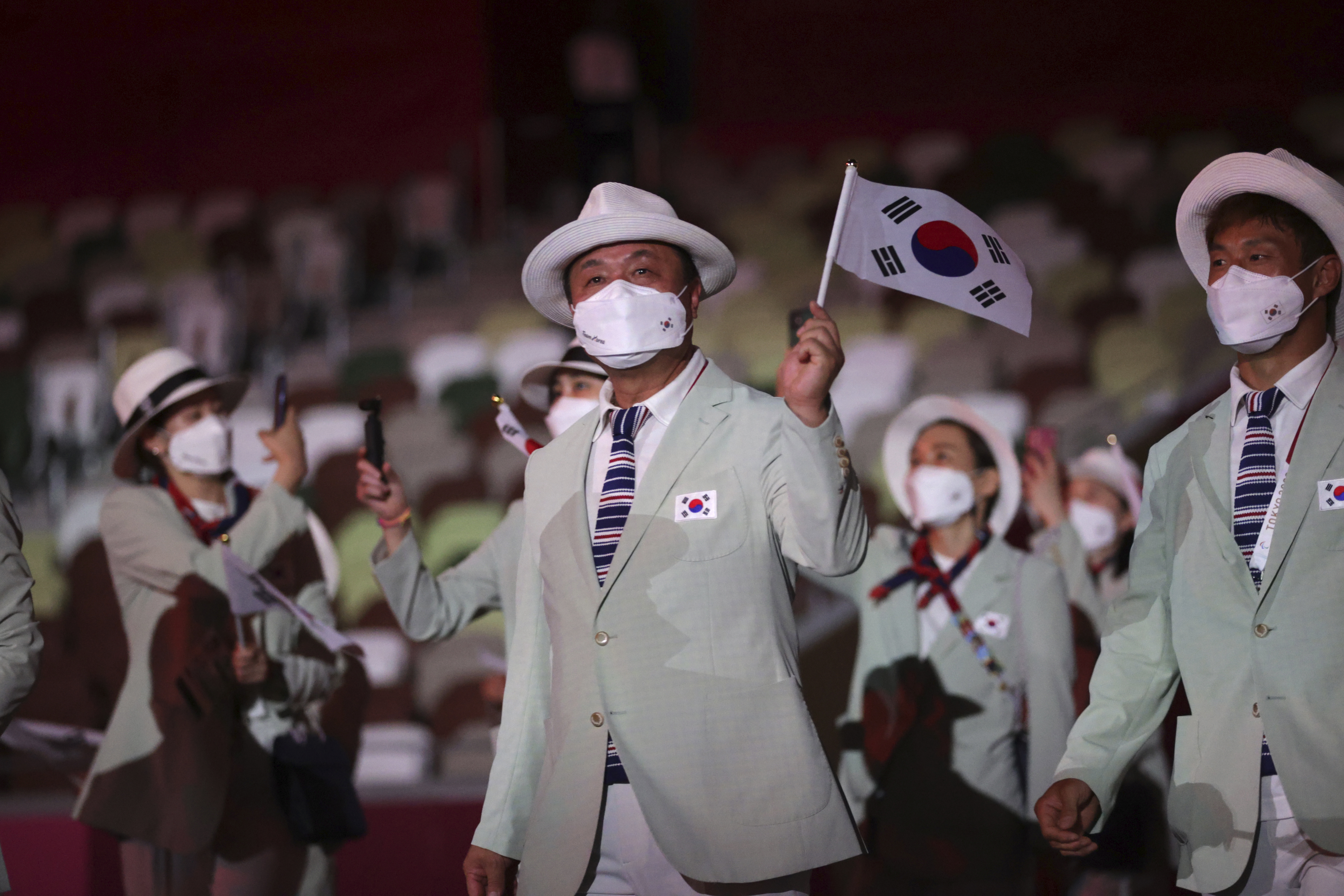 South Korea’s athletes paid homage to the country’s flag with their opening ceremony look. The athletes wore a gray fitted blazer over a white shirt and trousers and accessorized the look with a striped tie and white hat. 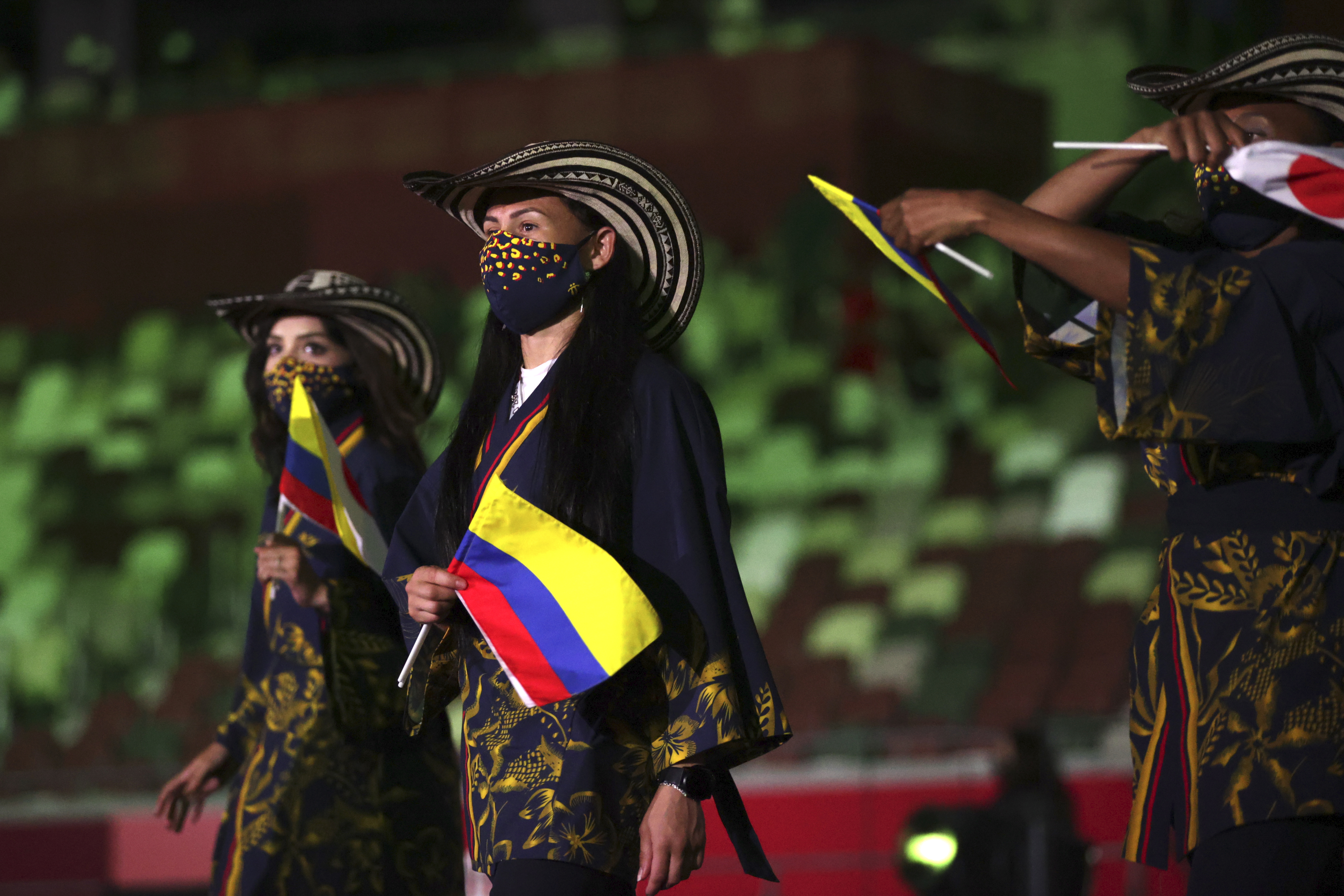 The Colombian team infused their own culture with that of Japan’s for their opening ceremony look. The athletes wore a traditional Japanese kimono that was embellished with yellow flowers and red, blue and yellow stripes reminiscent of the Colombian flag. The team accessorizes the look with a patterned hat and face mask.

A Closer Look at the Tokyo Summer Olympics Uniform Controversies

How Olympic Style Has Changed Over the Years

The Olympic Athletes You Need to Know in Tokyo